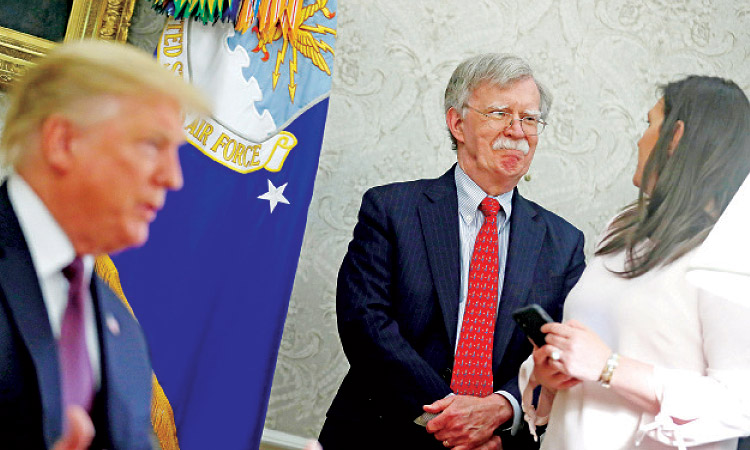 Donald Trump’s national security chief John Bolton is an equal opportunity warmonger. If he had his way, the US would be at war with North Korea, Cuba, Venezuela and Iran — all at once.  He supports a policy of exerting “maximum pressure” against these countries with the aim of achieving regime change, but believes that “only military action..can accomplish what is required.” This is what Bolton wrote in a 2015 column in the New York Times where he also argued in support of the Iranian opposition Mujahedeen-e Khalq, which has paid Bolton handsomely for speeches made to the cult supporters. The cult was on the US list of “terrorist” entities until 2017.

Speaking after Donald Trump took office, Bolton told a Mujahedeen-e Khalq audience, “I have said for over 10 years... that the declared policy of the (US) should be the overthrow of the mullahs’ regime in Tehran.” He pledged, “..before 2019, we ..will celebrate in Tehran.”  Although he failed to achieve this objective, this was not for want of trying — and he is certain to keep on trying.

After Trump himself, Bolton is the most dangerous man in the Trump White House.  Trump is a menace because he is ignorant, lazy, erratic, manipulative, and narcissistic: everything is about him.  Bolton is a major threat to the world because he is hard-working, focused, ruthless, and arrogant: he is absolutely determined to get his way and has constant access to a Trump who can be swayed by pressure and bullying.

Bolton, 70, has been involved with Republican administrations for the past four decades, beginning with Ronald Reagan.  Bolton took up his present post on April 9th, 2018.  Since then he has convinced Trump to honour his campaign promise to withdraw from the 2015 deal providing for Iran’s dismantling of its nuclear programme in exchange for sanctions relief. Bolton not only pressed Trump to tighten sanctions but also to punish European, Asian, and other countries that do not comply.

Bolton, reportedly, also pressed Trump to demand total disarmament from North Korean leader Kim Jong-un, prompting him to reject negotiations and resume short-range missile tests.  Bolton has also been responsible for the Trump cock-up over the crisis in Venezuela by claiming the country’s army was ready to oust President Nicolas Maduro which this was not the case.

Finally, Bolton promoted the notion that a US aircraft carrier group and B-29 bomber aircraft deployments were in response to rising tensions in the Gulf while these movements had been planned for some time. He held these movements were due to Iranian threats when in fact the US was the party to adopt a threatening posture.

Bolton was born in 1948 in Baltimore, Maryland, into a working class family. By the time he attended Yale University on scholarship he was a committed conservative hawk. This means he is not a “neo-conservative” activist like key members of this camp who began their careers as liberal hawks.

He graduated with high honours and attended Yale Law School. Bolton backed the Vietnam war but joined the Maryland national guard to avoid fighting. He later wrote, “I confess I had no desire to die in a Southeast Asian rice paddy (field).

“I considered the war in Vietnam already lost.”

He was not the first among the many men who became US policy-makers to wriggle out of Vietnam: Trump, Trump’s personal lawyer Rudy Giuliani, former President George W. Bush, his Vice President Dick Cheney, and current Senate Majority Leader Mitch McConnell, to name a few.  In spite of their adoption of risk-avoidance, these men have favoured war as a means to project US global hegemony. Consequently, they have been dubbed “chicken hawks” by those who have served in the military and commentators.

Bolton was appointed to the Justice Department during the Reagan administration where he promoted opposition to reparations for US Japanese citizens confined to internment camps during World War II and backed conservative judges for the Supreme Court. Under Bush junior, Bolton served as under secretary of state for arms control and security and was a strong advocate of the 2003 Iraq war on the false pretext that Baghdad possessed weapons of mass destruction (WMD).

Although his job was to focus on preventing WMD proliferation, Bolton secured the US withdrawal from the Rome Statute which established the International Criminal Court and pressed foreign governments to ensure US troops would not be charged with war crimes by the Court.  He briefly served as US ambassador to the UN which he had criticised ahead of this appointment.  The Economist dubbed Bolton

“the most controversial ambassador ever sent by (the US) to the United Nations.”

He did not receive Senate confirmation and was obliged to step down.

During Trump’s campaign there was speculation that Bolton would be chosen to be secretary of state but he waited for 15 months to secure his current post. while his record in government did not deter Trump from making this appointment, Bolton’s record and connections should have caused him to pause.  In addition to being a contributor to the president’s favourite Fox News, he wrote for the conservative Weekly Standard and was chairman of the far-right Gatestone Institute which circulates anti-Muslim and anti-immigrant “false news.”

Bolton’s stand on regional issues is determined partly by his strong support for Israel and partly by his determination that the US must dominate this strategic and oil-rich area. Bolton opposes the two-state solution which would bring about a Palestinian state alongside Israel.  He backed Trump’s recognition of Jerusalem as Israel’s capital and shift of the US embassy from Tel Aviv to the thrice Holy City. In 2010, he co-founded the Friends of Israel Initiative to combate efforts to de-legitimise Israel and therefore stands against the Palestinians’ Boycott, Divest, and Sanction (BDS) movement which is designed to put pressure on Israel to reach a peace deal with the Palestinians.

He has proposed a “three-state” solution: Israel, ceding Gaza to Egypt, Palestinian areas in the West Bank to Jordan.  The issue of the status of Jerusalem would be settled as Amman would become, as he put it, the seat of government for an enlarged Jordan.”

Despite its disastrous results, Bolton continues to support the 2003 war on Iraq. His hawkishness on Iran has disturbed even Trump, whose aggressiveness has, so far, been confined to verbal threats.

Anti-war US legislators and commentators warn that Bolton and his hawkish allies, including Secretary of State Mike Pompeo, seek to use the 2001 use-of-force Congressional resolution, adopted after al-Qaeda’s attacks on New York and Washington, to launch a war on Iran without the Congressional approval mandated by the US Constitution.  That law granted the president the power to employ force against “nations, organisations, or persons he determines planned, authorised, committed, or aided the terrorist attacks that occurred on September 11, 2001, or harboured such organisations or persons..”

Trump’s hawks claim Shia Iran hosts Sunni al-Qaeda which Iran and its allies been battling in both Iraq and Syria. This claim is as false as the Bush administration’s claims that Baghdad possessed WMD, a claim used to wage the war on Iraq that has destabilised and led to the rise of al-Qaeda in the region.