Maduro under pressure as opposition seeks US army’s support - GulfToday

Maduro under pressure as opposition seeks US army’s support 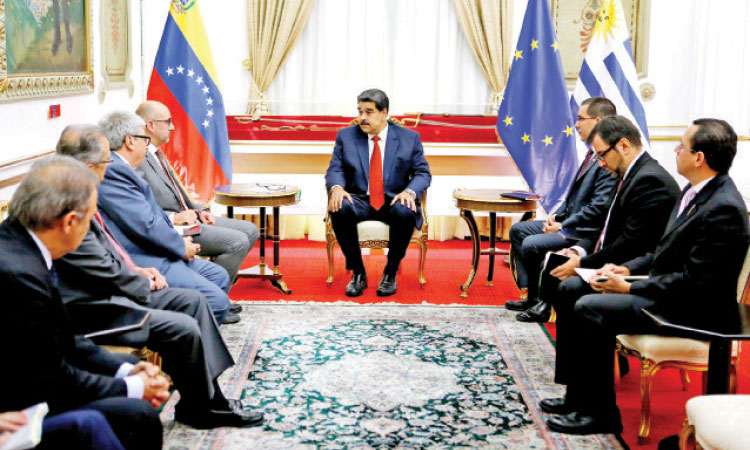 Nicolas Maduro attends a meeting with representatives of European and Latin American countries in Caracas. Reuters

The United States for now has ruled out holding any negotiations with Nicolas Maduro and instead is focused on how to orchestrate a “dignified exit” for the Venezuelan leader after an opposition uprising and a series of sanctions failed to oust him from power.

“We have been very clear that negotiations with Maduro are not possible,” a senior State Department official told the Miami Herald.

However, the official said the United States continues to discuss how to give the Venezuelan leader a way out that could lead to a political transition. The United States and more than 50 other countries do not consider Maduro the legitimate president of Venezuela, but recognize the head of the National Assembly, Juan Guaido, as Venezuelan interim president.

“The word negotiation is not one that we really use,” the official said. “The best we can offer is what we call off-ramps, which are different ways in which we can facilitate a dignified exit to Maduro. We are having those conversations.”

At the same time, the Venezuelan opposition has formally requested US military support.

After Guaido’s call for a military and popular uprising against Maduro failed on April 30, the United States, the Lima Group — 12 Latin American countries and Canada — and the European Union have discussed how to continue supporting the Venezuelan opposition. However, the coalition is split on whether talks between Maduro and the opposition should take place to break the stalemate. The United States and many in the Venezuelan opposition are wary of Maduro using that process to buy time, as he has done in the past. At the same time, they have been portraying a more optimistic picture of the uprising effort’s outcome.

“We want to make sure that our international coalition remains strong,” the State Department official said. “We look at the events of April 30th and what we see is all of Maduro’s top-tier military and intelligence service were willing to essentially throw him under the bus. Our European partners need to understand that Maduro has his back against the wall and trusts no one inside Venezuela.”

Last weekend Maduro ordered the arrest of the National Assembly Vice President Edgar Zambrano and on Tuesday agents of the intelligence police — the SEBIN — blocked the entrance to the parliament building.

But the Venezuelan opposition is not completely closing the door to talks with Maduro’s representatives.

“We are working on all options to put an end to the dictatorship and we are advancing with each of them,” Guaido said on Thursday, while confirming the opposition has received an invitation from Norway to explore potential talks. Members of the International Contact Group, comprising eight EU member states and four Latin American countries, arrived in Caracas on Thursday to offer a proposal to both the opposition and the Maduro government to hold new elections. Guaido thanked the effort on Twitter but stated that the path to a solution was clear: “cessation of usurpation (of powers by Maduro), a transition government and free elections.”

Guaido also said they were pursuing other options to put an end to the “dictatorship.” As pressure mounted on Guaido to deter Maduro’s emboldened attacks on the National Assembly and address the humanitarian crisis in Venezuela, the opposition ratcheted up efforts this week to obtain military support from the United States, even though experts say a military force option remains unlikely.

Carlos Vecchio, the Venezuelan opposition’s ambassador to Washington, met on Tuesday with US Deputy Assistant Secretary of Defense for the Western Hemisphere Sergio de la Pena on the sidelines of the Concordia Americas Summit in Bogota, Colombia. “They discussed the way the two countries operate, the way we do business, and they do business,” Pentagon spokesman Army Maj. Christian Mitchell said. A statement from the Venezuelan Embassy in Washington, representing Guaido, said they discussed “priority mechanisms to stop the suffering of millions of Venezuelans.”

Following the discussion, de la Pena said, “there will be more meetings to follow because Venezuela will be a decades-long problem.” Vecchio has also requested a meeting with Adm. Craig Faller, commander of US Southern Command (Southcom), in a gesture regarded as unusual by several experts.

The US Defense Department has participated in the transfer of humanitarian aid to the Colombian border with Venezuela and recently announced that it was sending the hospital ship USNS Comfort to assist Venezuelan refugees in several countries in the region. However, in a letter sent to the Southern Command, the Venezuelan National Assembly said it was interested in “strategic and operational planning so that we may fulfill our constitutional obligation to the Venezuelan people in order to alleviate their suffering and restore our democracy.”

“We must not confuse military cooperation with violence,” Vecchio told the Miami Herald. “That is the narrative that the regime wants to impose ... The Southern Command has among its mission to deploy relief missions ... The crisis in Venezuela is real, it is not hypothetical, and it has the catastrophic dimensions of a war or a natural disaster.”

Vecchio also said that in seeking military cooperation the opposition was asking for help to “end the usurpation of power” by Maduro, “stop the repressive capacity of the Maduro regime” and Cuban interference in the Venezuelan military.

Florida Sen. Marco Rubio said on Twitter that Guaido requested cooperation “in light of the uninvited foreign forces inside Venezuela,” a reference to Russia and Cuba. Some experts were skeptical that the request would accomplish anything of significance given that the opposition does not control the Venezuelan military.

“The problem with this request is that Guaido does not control the military, so who’s US partner?” said Frank Mora, a former Pentagon official during the Barack Obama administration. “It’s also very odd and unprecedented for an ambassador to go to Southcom to ask for cooperation. This is not how this works, there’s an interagency process.”

Seeking Southern Command’s support, as well as a parallel effort to join the so-called Rio Treaty — an inter-American defense agreement — illustrate that the Venezuelan opposition is “extremely frustrated at this point and they are willing to try everything that could work,” said Michael Shifter, president of the Inter-American Dialogue.

“They are trying every path because they are not content with losing momentum,” said Eric Farnsworth, a former State Department official and current vice president of the Council of the Americas and Americas Society.

Surveys conducted in Venezuela have consistently shown that most Venezuelans would support a military intervention to remove Maduro from power. The problem for the opposition is that neither the US government nor the members of the Lima Group have shown a real appetite for it, despite repeated warnings by some Trump administration officials that military plans have been contemplated.

For the moment, the administration seems confident in financial and economic sanctions. The United States “has an ample toolbox” of options to keep putting pressure on Maduro and his allies, Mauricio Claver-Carone, senior director for Western Hemisphere at the National Security Council, said at the Concordia Summit.