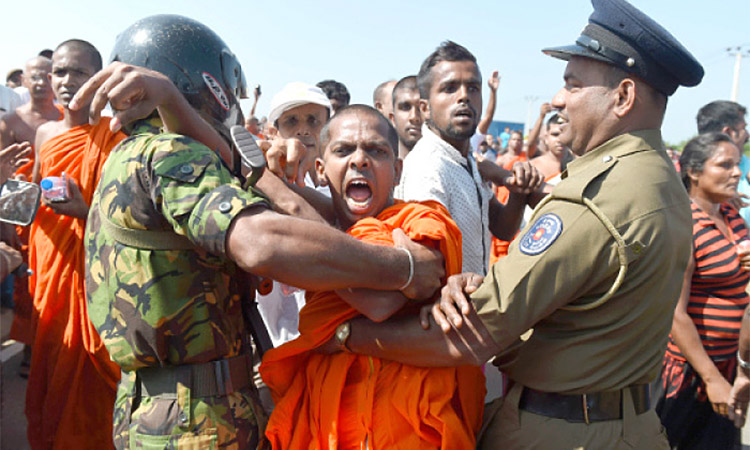 Growing incidents of religious-based violence in the North Western Province of Sri Lanka are a matter of serious concern and the authorities should see to it that hate attacks directed towards the country’s Muslim minority never happen again.

It is true that Sri Lanka’s police have arrested several suspects and reimposed night curfews in violence-prone areas after anti-Muslim riots left one man dead and caused extensive damage to homes, businesses and mosques, but intolerance is visibly growing and needs to be tackled.

Fear has forced Muslims in the North Western Province to remain nervous and stay indoors.

The police making several changes in the command structure by removing senior officers in the troubled areas is a step in the right direction as there have been allegations of officials doing nothing to stop the rioters.

The military has even released a CCTV footage showing a man in uniform apparently standing by while a mob pelted stones at a home, and has sought public help to identify the individual.

The detention of Amith Weerasinghe, a man from the Buddhist Sinhalese community who is on bail for his role in similar riots in March last year in Kandy, does send a strong message. But more needs to be done.

Top United Nations officials too have expressed deep concern over the situation.

Adama Dieng, UN Special Adviser on the Prevention of Genocide, and Karen Smith, UN Special Adviser on the Responsibility to Protect, have stated in a joint statement that it is in the interest of all ethnic and religious groups in Sri Lanka, as well as the government, the opposition, civil society and the security sector, to work collaboratively in taking appropriate action and immediately stop these hateful attacks.

As the two Special Advisers pointed out, the country is trying to move forward from a traumatic period of inter-ethnic armed conflict, but these attacks are pushing Sri Lanka backwards. If not adequately dealt with, the recent violence has the potential to escalate even further.

The government needs to show that it will not tolerate the spread of prejudice and hate among groups within its population at both the national and local levels by putting an end to local discriminatory practices that perpetuate religious intolerance and violence.

In retaliation for the deadly violence on Easter Sunday against Christians churches and upscale hotels in various parts of the country that left more than 200 people dead and hundreds injured, revenge attacks reportedly took place against mosques and Muslims’ homes on Monday.

Sri Lankan cricket legend Kumar Sangakkara was among those to call for calm, earlier tweeting: “Stop. Breathe. Think. Open your eyes. If we lose ourselves in violence, racism, thuggery and hatred we lose our country.”

The attacks on mosques, burning of houses and shops, and attacks on innocent people cannot be justified in any way.

The government has assured the safety of all communities and warned of stern action against anyone spreading hate. That is the right stance to take and it should remain firm and show zero tolerance towards intolerance.

The government should also fully investigate the deplorable attacks and bring to justice those responsible for instigating or committing such violent acts.

Hate and bigotry have no place in a sane society. No one should be allowed to mess with inter-religious harmony and inclusivity in the country.