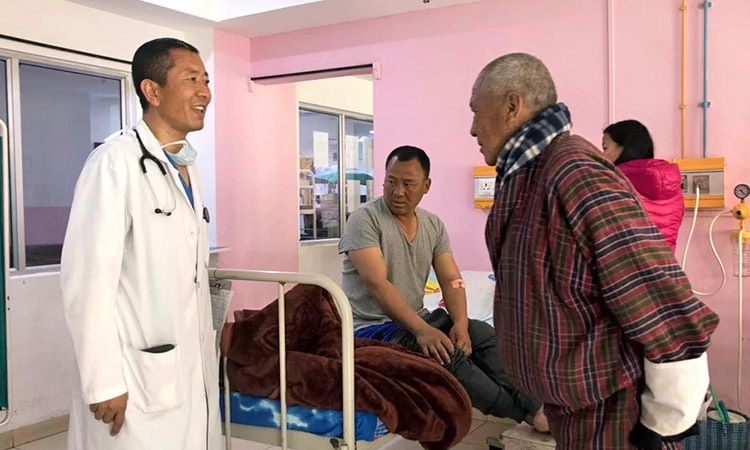 Lotay Tshering speaks with patients as he does rounds at the National Referral Hospital in the Bhutanese capital Thimphu. AFP

The story about the prime minister of Bhutan is so endearing. In fact the country in itself is very endearing and it reads like a country out of this world while still being very much a part of this world (“In happy Bhutan, Prime Minister is a doctor on Saturdays,” May 10, Gulf Today).

It’s measure of gross happiness index is one of the reasons that it is unique. It shows a country interested in the welfare of its citizens, and thus it’s success is based on how the citizens feel about life there. The other reason is Bhutan’s stance towards the environment — the legislation which says that 60 per cent of the land should be under tree cover.

But the cherry on the top is Bhutan’s wonderful prime minister who also seems to be a wonderful human being. News about him has been doing rounds on the internet and why not? He’s an internet sensation for the right reasons.

His dedication to his passion and towards the healthcare of the country is commendable. While the prime ministers of the countries in the world are either busy being corrupt, or having their foot in the mouth or are busy constructing walls and planning wars, and if wars don’t exist, are passing legislations to destroy the environment or are creating communal disharmony or are finding devious means to win an election despite not even coming close to what the PM of Bhutan has done, Lotay Tshering is what all of the above is not.

The other observation is the PM of Bhutan is unassuming. He seems to seek no applause when he walks through the halls of the hospital nor does he expect the nurses and doctors to drop their work and medical tests and files and join their hands to worship him.

Lesson to be learnt is that we need humble and educated people to be prime ministers. People who have their head on their shoulders, and who do not seek glory to assuage their inner well of insecurities.