US is taking fewer refugees than ever, it’s our loss - GulfToday

US is taking fewer refugees than ever, it’s our loss 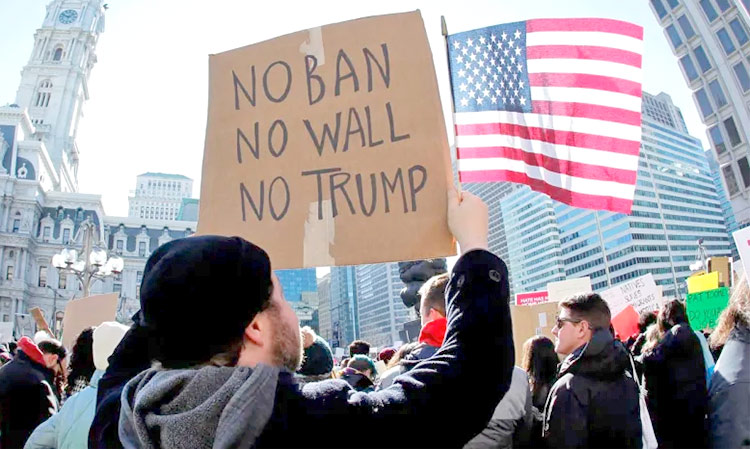 People protest against the refugee ban in the US.

In November of 2016, a Darfuri man named Ameen, his wife, Aarya, and their daughter were referred by the United Nations High Commissioner for Refugees for resettlement to the United States. That welcome news came after more than a decade of persecution and hardship for the family, first in Sudan, where the Janjaweed militia were systematically killing Darfuris, and later in Jordan, where they fled.

In the past, such a referral generally meant that a refugee could hope to be resettled fairly quickly. But Ameen and his family are still waiting in Jordan as a result of a marked shift in US refugee policy.

In recent weeks, a lot has been written about President Donald Trump’s xenophobic attacks on people seeking asylum at US borders. But we should remember that the administration has also gutted and radically reshaped the other primary way people fleeing persecution come to the United States: the US Refugee Admissions Programme.

Part of the shift in how refugees are being handled can be seen in the numbers. In the last fiscal year of Barack Obama’s presidency, the United States took in about 85,000 refugees. In fiscal year 2018, the first full year of Trump’s presidency, the number dropped to about 22,500. For the current fiscal year, which ends in October, the administration has set a ceiling of 30,000 refugee admissions, but we are not on track to hit even that paltry number. Halfway through the year, we have admitted just over 12,000 refugees.

And it is not just the numbers that have changed. Since Trump took office, a far smaller percentage of the refugees admitted to the United States are Muslim — a significant shift, since many of the world’s most desperate refugees today are Muslim. That said, because admissions are down so sharply, the overall number of resettled Christian refugees is also down.

The changes are rooted in Trump’s broader policies targeting certain countries for much stricter visa and refugee policies. This process began with an executive order Trump issued just a week after taking office in January 2017. In addition to banning visitors from seven predominantly Muslim countries, the order suspended all refugee resettlements for 120 days.

Today, after many court challenges and some changes to the order, the so-called Muslim ban is now the law of the land, and millions of people are being prevented from entering the US under its terms.

In October 2017, the administration struck another blow to refugees, barring admissions from 11 designated countries (most of them predominantly Muslim), saying it was a temporary move to “study” the situation. About 44 per cent of US refugee admissions in fiscal year 2016 came from the countries targeted by that action, which included Somalia, Sudan, Iran, Iraq, Syria, Egypt and Yemen.

Following a lawsuit brought by several organisations, including my organisation, the International Refugee Assistance Project, a judge largely blocked this order, and the injunction was upheld by the US 9th Circuit Court of Appeals.

Trump’s efforts stem from a narrative that paints refugees, at best, as foreigners stealing jobs and draining government resources and, at worst, as criminals and terrorists. The administration’s stance, however, ignores overwhelming empirical evidence, including from its own study, that refugees are a huge net benefit to the US economy.

To counter the administration’s narrative, some on the left are taking a similarly flawed approach, portraying refugees as downtrodden victims plagued by poverty and war in desperate need of charity. This view helps fuel the right’s fears that refugees are coming solely to take from our society and implies they don’t have much to give.

In actuality, refugees are a self-selecting group of some of the most tenacious, creative, democracy-loving people in the world. Far from being likely recruits for terrorists, they have stood up to terrorism. They have been through hell, survived and found a way out with their families.

The United States values ingenuity and entrepreneurship, traits essential to escaping from Daesh-occupied Mosul, making the treacherous journey across another country’s border, and living to tell the story.

Ameen, Aarya and their young baby, the Darfuri refugees whose resettlement is in limbo, would do well here in the United States. Ameen is a farmer by trade, and his skills would be useful in our agricultural sector, which is plagued by labour shortages. Aarya has studied to become a doctor, and their baby daughter is the embodiment of endless possibility.

We would be lucky to have them as neighbours.