Poll results could force May and Corbyn into a Brexit pact 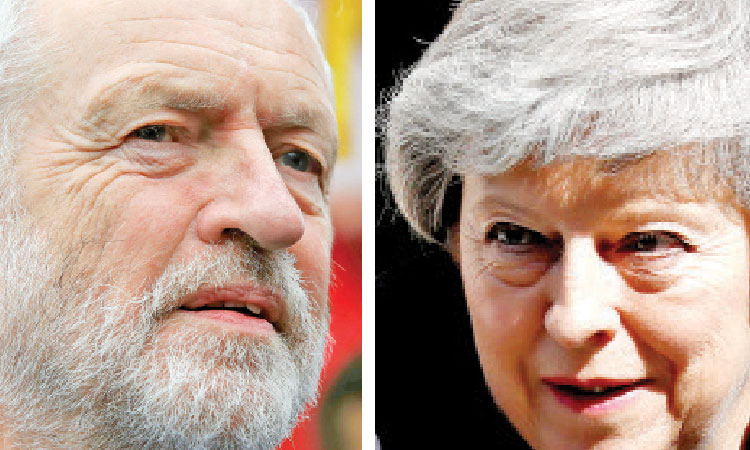 Jeremy Corbyn and Theresa May. File

What a difference two years makes. At the 2017 general election, the Conservatives and Labour halted a long-term decline in their combined share of the vote, winning a remarkable 82 per cent between them.

We thought two-party dominance was back. We were wrong. The overnight results from Thursday’s local authority elections in England show that voters deserted both main parties after two years of Brexit deadlock. The duopoly has been broken by Brexit. Our political see-saw, when one party is up and the other down, is stuck, just like Brexit in fact.

The Tories suffered heavy losses, but that was inevitable because they made sweeping gains when the same seats were last fought as David Cameron won a surprise general election victory on the same day. Theresa May has nothing to celebrate but will be relieved that Labour has shared some of her party’s pain by losing seats too, notably in its northern heartlands.

Labour’s performance was not that of a party on track for victory in the general election Jeremy Corbyn covets, and which might well take place later this year if Brexit has still not happened and May’s successor seeks a new mandate.

The rejection of the big two parties would have been even greater if Nigel Farage’s Brexit Party and Change UK (formerly The Independent Group) had fielded candidates. But they will not escape the threat from the new kids on the block at the 23 May European Parliament elections. The two main parties will fear an even worse night than Thursday night.

The council results will be seen as evidence that voters are furious with the failure to deliver Brexit on schedule in March – a “just get on with it” message, in other words. Predictably, Tory Eurosceptics are renewing their calls for May to stand down immediately. However, the results were not simply a protest at the failure to leave the EU. The big winners were the re-energised Liberal Democrats, whose clear pitch as the party of Remain and a Final Say referendum, did not stop them making gains in Tory-held areas in the south.

That will worry Labour. It suggests that Corbyn’s strategy of appealing to both Remainers and Leavers, which worked at the 2017 election, is running out of road. Constructive ambiguity, and conflicting signals over whether Labour backs a referendum, have their limits. Labour’s claim to be the only party that can bring a divided country together again looks a bit thin.

The opposition party normally makes gains at local elections; Labour should have done so this time as it did badly when the same seats were last contested. Instead, the party was hit by a Brexit backlash in Leave-voting areas in the North, while the Lib Dems scooped up Remainers in the South.

Voters, knowing they were not choosing a government, found a way of kicking the big two parties where they could. The Greens, also in favour of a referendum and Remain, made gains and voters elected more than 200 new independent councillors, an endangered species.

The local elections could have an unexpected impact on the Brexit process, by increasing the pressure on the two main parties to reach a compromise agreement when their negotiations reach a critical stage next week.

May and Corbyn are unlikely bedfellows and few MPs gave their talks much chance of success. But the mood music has been more upbeat in the past week and there are signs the two sides might strike a deal on a customs arrangement with the EU. It’s far from certain that such a deal would be passed by the Commons. May and Corbyn may find their MPs in no mood to compromise. But by giving it a try, the two leaders would at least have a chance of addressing the voters’ apparent desire to bring a plague on both their houses.