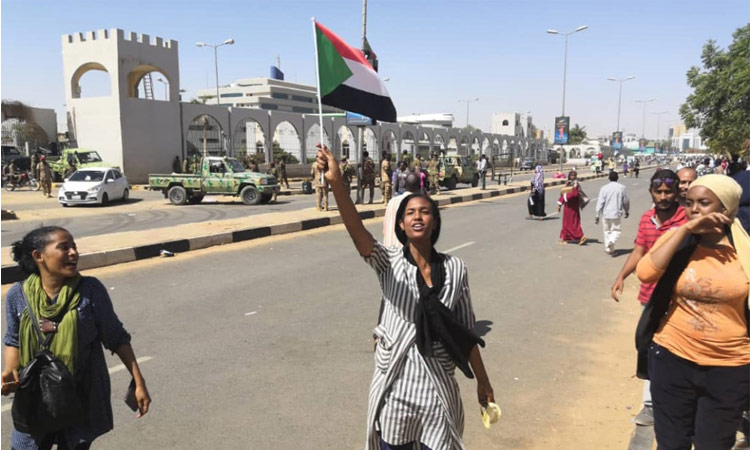 People chant slogans in a rally.

At this point of time when Sudan is going through troubled times, peace and restraint are key aspects and it is important that the country’s democratic transition takes place in a systematic and peaceful manner.

As reflected in the well-meaning Twitter message by Dr Anwar Bin Mohammed Gargash, UAE Minister of State for Foreign Affairs, “It’s totally legitimate for Arab states to support an orderly and stable transition in Sudan. One that carefully calibrates popular aspirations with institutional stability. We have experienced all-out chaos in the region and, sensibly, don’t need more of it.”

The UAE has always stood by brotherly nations at their time of need and extended timely assistance.

Just last week, the Abu Dhabi Fund for Development, ADFD, announced its plan to deposit $250 million into the Central Bank of Sudan, CBOS, to secure increased liquidity and strengthen the financial position of Sudan.

The deposit falls within the framework of the newly announced $3 billion UAE-Saudi Arabia joint aid package for Sudan that has committed $500 million to CBOS, evenly split between the two countries.

As stated by Mohammed Saif Al Suwaidi, Director-General of ADFD, the directive to deposit $250 million into CBOS aligns with the UAE leadership under the directives of the President His Highness Sheikh Khalifa Bin Zayed Al Nahyan, and His Highness Sheikh Mohamed Bin Zayed Al Nahyan, Crown Prince of Abu Dhabi and Deputy Supreme Commander of the UAE Armed Forces, to support Sudanese people and economy, as well as help achieve financial stability in the country.

The ADFD and the Government of Sudan have enjoyed strong and long-standing ties dating back to 1976. The fund’s development projects have significantly contributed to improving socio-economic conditions and driving sustainable growth.

To date, the ADFD has financed 17 development projects in Sudan with a total value of approximately Dhs2 billion, spanning crucial sectors, such as industry, transportation, energy, water and irrigation.

In 2017, the fund has disbursed about Dhs1.470 billion to support liquidity and foreign currency reserves at CBOS. This move has assisted the Sudanese government in stimulating the economy and overcoming financial challenges.

A tripling by the government of the price of bread in the face of a chronic shortage of flour was the immediate trigger for the four months of nationwide protests that led to veteran president Omar Al Bashir’s overthrow.

Central bank deposits by the UAE and Saudi Arabia have so far staved off any further slide in the value of the Sudanese pound, while cheap credit for imports of basic goods has averted more widespread shortages.

It would be appropriate on the part of the international community to understand the situation and support the nation in order to achieve the Sudanese goal of democratic transition.

All political, factional, popular and military leaders in the Republic of Sudan should work for ensuring a peaceful transfer of power and a better future for the nation.