When the government refuses to act, taking direct action on climate change seems to be the only option - GulfToday

When the government refuses to act, taking direct action on climate change seems to be the only option 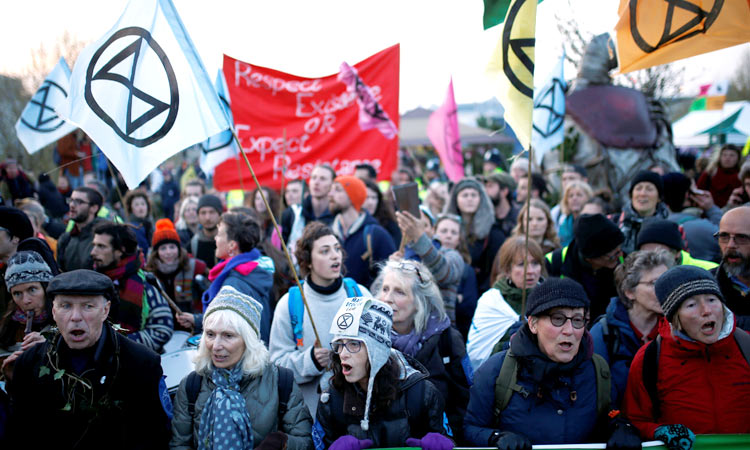 This week, we have seen protesters led by activist group Extinction Rebellion cause disruption to London commuters as they try to wake everyone up to the fact that climate change is happening and that we’d probably better do something about it before we all drown with our eyeballs on fire.

Macho Man Sajid Javid has called for “the full force of the law” to be unleashed on protesters, leaving the police scratching their heads over exactly what the appropriate response would be to people linking arms and dancing around in the street with rickety bongos draped around their necks, or gluing themselves to a friend. Kettling seems pointless when the preferred mode of protest is lying down.

The home secretary pointed out that “commuters trying to earn a living have been unable to travel to work and businesses have been disrupted”. Indeed, this has been an unfortunate side effect of all protests throughout history: the pro-Remain and pro-Leave marches, the march against the Iraq War where almost a million people disrupted routes through the city, and the Countryside Alliance marches in 1998 and 2002 certainly put people out. Going a little further back, the Tiananmen Square protest, the women’s suffrage movement, and the storming of the Bastille all made a few people – and the odd horse – late for work.

Extinction Rebellion is a direct action group. Throughout history, direct action has divided people. On the one hand, displays of mass civil disobedience can be a bloody nuisance; on the other, when the government responds to every petition with yet another patronising “nah”, what exactly is left for you to do? Sometimes you have to make yourself that little bit harder to ignore.

This week on Sky News, one of its number – a certain Robin Boardman-Pattison – was passionately, articulately and politely explaining why he felt that killing the only habitable planet in the solar system wasn’t the best idea, when the interviewer Adam Boulton suddenly leapt in and gave him a proper telling off like the 1940s housemaster he’s clearly always fantasised about being. “You’re a load of incompetent, middle-class, self-indulgent people who want to tell us how to live our lives,” spat Boulton, stopping just short of tying Boardman-Pattison to a radiator.

Climate-change protesters are often derided for being young and middle class. It isn’t true of all of them by any means, but it’s fair to say that the young – with their whole lives stretched out before them, and their minds not yet adapted to the absurdities and obscenities of the adult world that the rest of us have learnt to navigate or ignore – have much more drive to fight for their future. It’s the young who have the verve, the vigour and, frankly, the time to take to the streets.

As for “middle class”, are we really saying that people with social capital shouldn’t be allowed to get involved in social movements? I’m sure that would suit climate-change deniers down to the ground, as much as the British Raj would have preferred not to be dealing with that dreadful ex-lawyer, Mohandas Gandhi. The fact is that there are people from all classes involved in this movement – as there generally are – but while the middle-class kids are being ridiculed, the working-class kids are being roundly ignored. They certainly aren’t being invited on to national news channels so that a seasoned broadcaster can try to pull the rug out from under the feet of an earnest young bloke who might not have gone into the interview expecting an onslaught of mindless abuse.

As David Attenborough told us in the recent documentary Climate Change – The Facts: “Right now, we are facing our greatest threat in thousands of years.” It’s not an easy documentary to watch, but essential. Throughout my life, this man, with his mug-of-hot-chocolate voice, has educated me on natural history. Frankly, if he is worried, then I am freaking out. You don’t even have to be a scientist to see what is going on: the heatwaves, the floods, the forest fires, melting ice, and it’s all happening at a far greater rate than we thought it would.

No rational person can listen to the evidence of scientists and continue to bury their head in the sand. Letters to MPs, online petitions, and parliamentary flannel have not worked. When the non-disruptive, polite, TED Talk type of protest falls on deaf ears, direct action is the only way.