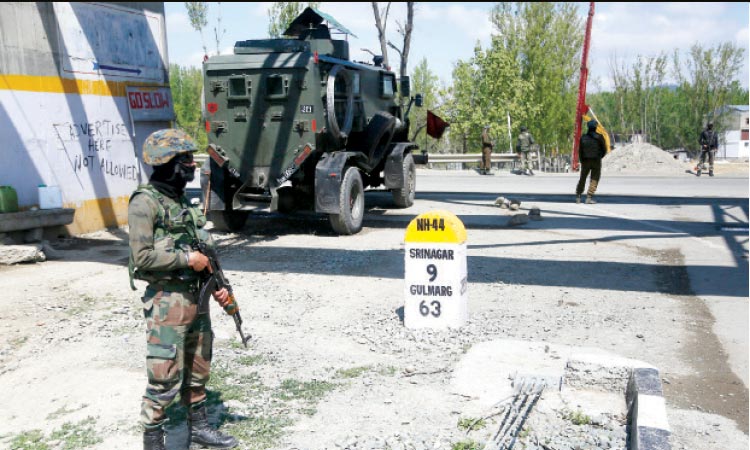 An Indian army soldier guards a highway on the outskirts of Srinagar.

The debate on Kashmir has produced a crop of ‘experts’ whose analysis is in many cases tinted by their political alignment. In the run-up to the 2019 general election, the issue of handling of Kashmir by the Centre and the connected question of India’s Pakistan policy figure prominently in the opposition’s attack on the government.

In essence, the stand of the Modi regime was that the prime challenge in Kashmir was to counter the cross-border terrorism instigated by Pakistani agencies from across the LOC and prevent the latter from converting some vulnerable young minds in the Valley to the path of the gun in support of the infiltrated terrorists — all in the name of faith. The narrative on Kashmir whipped up by the opposition is silent on three important aspects of the issue — these have to be explained so that the distortion these gaps produced in the Kashmir story is understood.

First, the analysts disregard the basic fact that the discussion on Kashmir has to be around the integral state of Jammu & Kashmir that housed a multiplicity of religions — and not only about the Valley. For over two decades now, since the difficult election of 1996, the state was governed by a democratically-elected political executive which was supposed to connect with the entire citizenry of J&K and provide it with both development and security. The Valley-based political parties, who used the separatist lobby with its pro-Pakistan stance to gain power, did not measure up to the accountability they had towards all the people of the state for good governance. Because of their vested interests they never came out clean on the question that any communally guided solution-finding of the Kashmir ‘problem’ was simply not valid or acceptable for the reason that it will bring back the legacy of Partition and weaken India as a democratic nation.

The second serious flaw in the debate on Kashmir is traceable to a near complete ignorance on the part of many commentators, of the historical reality that the aggravation of the internal trouble in the Valley began in the early nineties when the external factor of Pakistan launching an entirely new kind of covert offensive from across the LOC came into play. The success of the anti-Soviet armed campaign in Afghanistan, for which Pakistan was given the entire credit by the Americans, led the Pakistan ISI to plan a replication of the Afghan jehad in Kashmir by pumping in Mujahideen into the Valley.

The arrival of Harkat ul-Ansar terrorists there in 1993 marked the start of a new level of proxy war operation of Pakistan. HUA comprised elements of the Taliban and Jaish-e-Mohammad and the subversion in the name of jehad that they launched, replaced the political slogans of plebiscite and azadi raised by the separatists earlier. Pakistan’s ISI had directed the Jamaat-e-Islami of Syed Shah Gilani to extend support to HUA at that time. Later Gilani’s young militants leading the indigenous outfits of the Jamaat, like Burhan Wani of Hizbul Mujahideen and Asiya Indrabi of Dukhtaran-e-Millat, were made to take orders directly from Maulana Hafiz Sayeed — chief of LeT in Pakistan. Terror in Kashmir has since been squarely directed from Pakistan — a limited number of locals converted to the path of jehad does not change this basic aspect of the Kashmir problem.

The third crucial gap in the current narrative of the opposition on Kashmir is in the interpretation of the role of the Indian army in the state. Cross-border terror is the instrument of ‘proxy war’ that the Pakistan ISI has been using against India in Kashmir and elsewhere. ‘Proxy war’ is a covert offensive but it is also ‘war’. Army that fights a ‘war’ on the border and beyond has to fight the ‘proxy war’ on our own soil. It has to specially retrain itself to meet the new combat environ — and this is what the Indian army has successfully done in Kashmir. It has been given the orientation for observing ‘restraint’ as it is operating in a civilian setting.

It carries out intelligence-based tasks so as to minimise collateral damage. It has the protective cover of AFSPA but its performance is monitored by the Unified Headquarter chaired by the Chief Minister. This underlines the concept that even in an insurgency-affected area, the army is deployed in aid of civil power. AFPSA defines misconduct of armed personnel and provides for punishment after an enquiry. Any criticism of the very presence of the army or the wholesale denunciation of AFPSA for political reasons makes no sense. Emphasis has to be on correcting operational methodology and deployment in the light of experience and doing everything possible to remove any misunderstanding about the same in the minds of the law abiding local people.

The regional politicians running the government have not done anything to work for that objective for the obvious reason that promoting a separatist ethos helped them to gain power. Can anything be more ridiculous than their stand that India should talk to Pakistan to prevent stone pelting incidents? They are either confirming that Pakistan was behind the spell of lawlessness in the Valley or admitting the utter failure of their administration to even deal with a civil disorder. While the political issues like Article 370 and Article 35A of the Constitution are in the realm of national policy — not matters affecting the average Kashmiri’s current day-to-day life — they are seized by these leaders to spread apprehension for keeping their vote bank intact. These provisions at best signify an advance degree of autonomy — which, by definition, will always be something less than sovereignty.

The democratically-elected leaders in the state should have, when in power, promoted economic development and collective security of citizens against the shadow of externally instigated terror but they did not do any of that and only allowed extremists to destroy Kashmiriyat which was known for shared veneration of Saints and Pirs at their Mazars by both Muslims and non-Muslims. Why did the state politicians in power not ask their Deputy Commissioners and SSPs to have a weekly interaction with the public to address their issues? Why did they never name Pakistan for infiltrating terrorists and instead openly appreciated the misguided youth who joined the Pakistan Mujahideen spreading violence in the Valley?

The ‘muscular’ approach of the Centre against terrorists must be extended to Pakistani agents and local collaborators of terror and at the same time the efforts of the administration to reach out to the youth in the Valley should be doubled. Pakistan is only interested in keeping the Kashmir valley destabilised and giving it a communal spin to get an opportunity of meddling in the domestic politics of India. The Pulwama attack on the CRPF by a suicide bomber of Jaish-e-Mohammad signals the intention of Pakistan to intensify its proxy war in Kashmir notwithstanding the disapproval it has earned from the world community for colluding with the outfits of Islamic terrorists.

It is playing for a larger geo-political strategy that gives it a say in Afghanistan to the detriment of India. It should be remembered that Pakistan had managed to instal an Afghan Emirate at Kabul under Taliban-Al Qaeda leadership in 1996. India’s handling of the Kashmir issue at home cannot be divorced from our ability to thwart the external threat from Pakistan’s designs facing the Valley. The tough stance against Pakistan on the issue of terror has to be maintained for as long as it takes and our foreign policy activated with equal vigour not to let Pakistan have its way in Afghanistan as well.