Don’t be fooled by the latest extension, a no-deal Brexit could be more likely than ever - GulfToday

Don’t be fooled by the latest extension, a no-deal Brexit could be more likely than ever 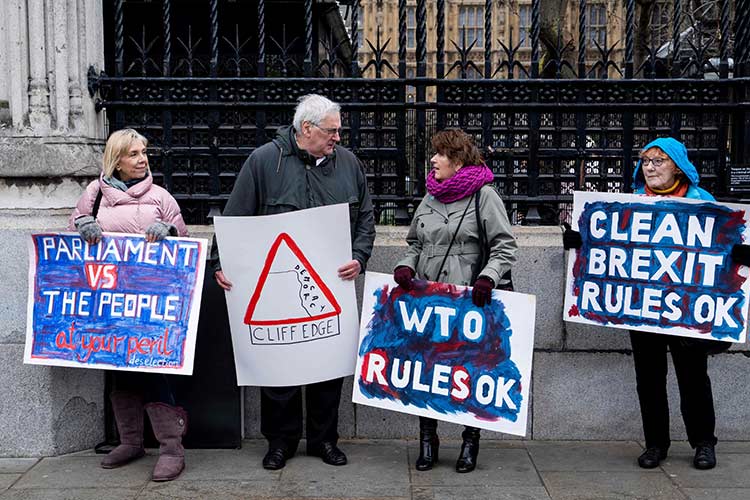 People protest outside Parliament in London.

“This is the BBC News at midnight on Friday 12 April. An hour ago, the UK left the European Union after 46 years of membership. In a televised address to the nation, Theresa May defended the decision to leave without a deal. She said it was the only way to implement the 2016 referendum because MPs had repeatedly blocked her withdrawal agreement. Earlier, amid dramatic scenes in the commons, MPs rejected by just one vote a proposal by senior backbenchers to force the government to scrap Brexit by revoking the Article 50 process.

“While admitting there would be some short-term disruption, the prime minister insisted Britain had a bright future ahead of it. She announced that the government would provide financial help to businesses and farmers hit by new tariffs. But supermarkets and drug companies warned that shortages of food and medicines were inevitable.

“In Parliament Square, supporters of Brexit cheered as Big Ben struck 11 o’clock. But police intervened amid angry clashes with pro-European campaigners, and there were 12 arrests. A petition calling for the UK to rejoin the EU has already attracted six million signatures...”

Well, it could have happened. We should be grateful that it didn’t. May, spooked by the fear that crashing out of the EU might see Scotland and Northern Ireland crash out of the UK, decided that no deal was not better than her bad deal after all. And the EU, not wanting the blame for a disruptive no-deal exit, extended the UK’s membership by six months.

There is cause for relief, but not celebration. The battle to prevent a cliff-edge departure has not been won, only postponed. Could the Conservatives become the “no-deal party” by the new deadline of 31 October? It’s perfectly possible and here’s how.

May will almost certainly not be prime minister by then. If, as looks likely, she fails in her fourth attempt to win commons approval for her withdrawal agreement, she will surely have run out of road. Cabinet ministers and Tory backbenchers would prise her out of No 10. She might try to bow out with some dignity by acting as caretaker prime minister while her party elects her successor.

The Tory leadership contest would be a competition to take the hardest line on Brexit. Some cabinet ministers have already auditioned by advertising their no-deal credentials. Last month, 157 Tory MPs – half of their ranks – voted to leave the EU today without a deal. The furious reaction by Eurosceptics to reports that the government has shelved no-deal planning shows their determination to keep the option alive. (Ministers have halted “imminent” plans but insist they continue long-term work.)

Tory MPs whittle down the runners to a shortlist of two, who go into a ballot of the party’s 120,000 members – the 0.26 per cent of the electorate who will choose our next prime minister. Surveys by the ConservativeHome website suggest 75 per cent of the members want a no-deal departure, so candidates might be easily tempted down that road. They would doubtless pledge to renegotiate the withdrawal agreement and change the Irish backstop. If they tried that as prime minister, the EU would surely rebuff it; a no-deal exit might be their next move.

There’s another way no-deal could happen. The EU’s patience with the UK is wearing thin. I was struck at Wednesday’s Brussels summit by the exasperation of UK allies such as Mark Rutte, prime minister of the Netherlands.

If Westminster were still deadlocked in October, a further Article 50 extension could not be taken for granted. The EU will have had more time to plan for no deal. Emmanuel Macron might win more support than he did this week for what French sources call “cutting off the rotten branch” of Britain, by now led by a Brexiteer. Donald Tusk and Jean-Claude Juncker, who favour a conciliatory approach, will be heading for the exit door. Angela Merkel’s influence is already on the wane.

So it will probably fall to MPs to ensure we never get to the cliff edge again. Rather than order the government to revoke Article 50, they should take the more democratic route of a Final Say referendum.