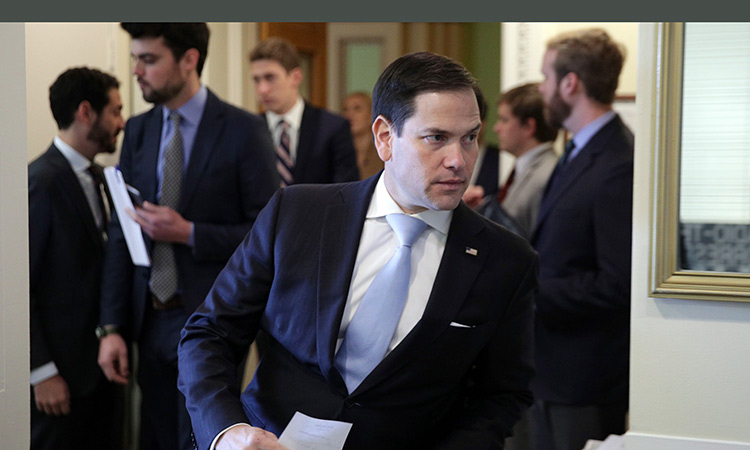 Marco Rubio arrives at a news conference at the US Capitol in Washington, DC. File/ AFP

He doesn’t seem to know the basic differences between socialism and communism.

But, more likely, Rubio is simply following the Donald Trump and GOP playbook for 2020, fearmongering and playing to people’s ignorance about socialism. No better place to do that than in his hometown of Miami.

The minute Rubio heard that NBC will host the first Democratic presidential debate of the 2020 election in Miami, the Republican senator from West Miami took to his favorite pulpit, Twitter, to warn us of the great evil coming our way over two nights on June 26 and 27.

“The first Democratic presidential debate will be in Miami. Which means we will have over a dozen candidates for President promoting socialism in a city which is home to hundreds of thousands of victims of socialism in #Cuba #Nicaragua #Venezuela,” he wrote.

That’s one whopper of a red herring, equivalent to race-baiting in this community, and done with the intention to mislead and distract voters from the real issues. (And, no, “president” in the middle of a sentence isn’t capitalized as much as you want the job. It’s a noun. No charge for the grammar lesson.)

So, what’s the goal? Stoke the base to provoke agitated Cuban Trump supporters into staging — in front of national TV cameras — those crazy protests that give Miami a bad name?

More importantly, Senator Rubio, explain this one to your constituents:

The pundits call Trump’s Maduro regime-change policy “the Rubio Doctrine” — and surely, you deserve the credit for putting Venezuela on the radar for Americans. But here you are, the champion for democracy in Venezuela, trying to preempt the debate of your political opponents by casting Miami as an inappropriate place for it.

It’s not like what I hear from Venezuelan opposition leader/president Juan Guaido, who has called for unity there and said there’s room in a post-Maduro era for all points of view. It would be infantile to believe a future Venezuela wouldn’t include some version of government subsidies when people are starving and institutions aren’t functioning.

Here, too, is the champion of democracy for one-party, totalitarian Cuba lying to subvert the foundation of US pluralism, which calls for different groups of people to voice different opinions and ideas.

There aren’t a dozen Democratic candidates for president “promoting socialism” — just second-time candidate Bernie Sanders, the Vermont senator who isn’t even really a Democrat but an independent running as a Democrat. Alexandria Ocasio-Cortez, who likes and spouses similar ideas, is a freshman congresswoman. Other candidates’ positions run the gamut of the Democratic political spectrum.

But, so what if there are more Democrats who want to talk about the happy social democracies of countries like Sweden and Finland? Or even if they want to peddle crappy socialism.

Despite the edicts of authoritarian Trump and his followers, despite the role big money is playing in elections with the blessing of the US Supreme Court, this is still a free country.

Just Google “big tent” and see how the idea of encompassing moderate and left and right of center ideas has become a cliche for both the Democratic Party and the GOP’s efforts to appeal to a wide range of voters. Both parties want the coveted independents to find a spot under their tent — the real reason, Senator Rubio, you are demonizing Democrats instead of debating the issues. But reality tells a different story.

The efforts to bring peace and democracy to the hemisphere aren’t yours alone. They’re bipartisan, backed by the actions of most Democrats in Congress — including all Democratic House members from South Florida.