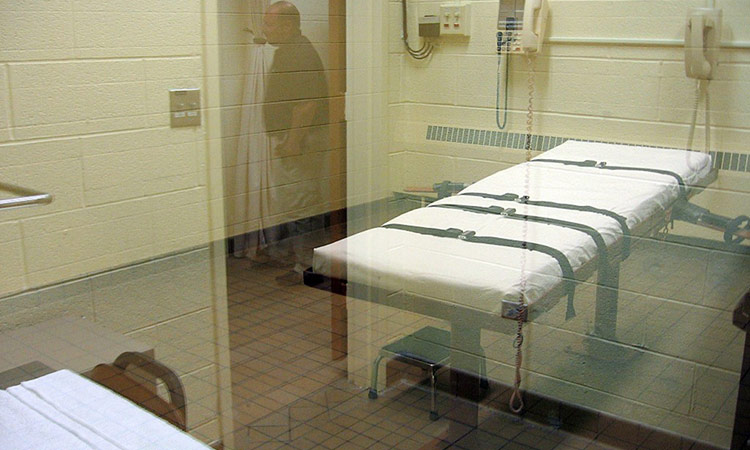 The execution chamber of the ‘death house’ at the Southern Ohio Correctional Facility in Lucasville.

The Supreme Court on Monday rejected an argument from a condemned murderer that his execution would violate the 8th Amendment’s ban on cruel and unusual punishment because an underlying physical condition from which he suffers would make the process excessively painful. The Constitution, Justice Neil M. Gorsuch wrote for the majority, does not entitle the condemned to a painless death, just one that does not inflict additional or unnecessary pain as part of the punishment.

It wasn’t an unexpected ruling, to be honest. But it was jarring in its harshness, and if any death penalty abolitionists had hoped that Gorsuch’s conservative dislike for government overreach might lead him to question its right to kill its own citizens, well, those hopes were dashed.

And they were dashed in a chilling manner, because Gorsuch made it clear that he thinks people exercising their constitutional right to appeal their death sentences are sometimes gaming the system in a disingenuous effort to delay their own executions. In the conclusion of his majority opinion, Gorsuch cited an earlier ruling that held that “both the State and the victims of crime have an important interest in the timely enforcement of a sentence.”

That is true as far as it goes. But what does “timely” mean? And at what cost? And does that interest supersede the right of the defendant to a fair trial, to a reasonable appeal, and to a death that is neither cruel nor unusual?

Gorsuch railed against prisoners filing appeals late in the process, thus further delaying death. In the case of the petitioner, Russell Bucklew, he was convicted in Missouri in 1997 of murders committed the year before, and “exhausted his appeal and separate state and federal habeas challenges more than a decade ago. Yet since then he has managed to secure delay through lawsuit after lawsuit.”

In fact, Gorsuch lamented, “he filed his current challenge just days before his scheduled execution. That suit has now carried on for five years and yielded two appeals to the Eighth Circuit, two 11th-hour stays of execution, and plenary consideration in this Court.

And despite all this, his suit in the end amounts to little more than an attack on settled precedent, lacking enough evidence even to survive summary judgment. ... The people of Missouri, the surviving victims of Mr. Bucklew’s crimes, and others like them deserve better.”

So a Supreme Court justice is piqued because someone charged with a capital crime used legal mechanisms to challenge his conviction and the method under which he is to be executed.

“Under our Constitution, the question of capital punishment belongs to the people and their representatives, not the courts, to resolve,” Gorsuch wrote.

“The proper role of courts is to ensure that method-of-execution challenges to lawfully issued sentences are resolved fairly and expeditiously. Courts should police carefully against attempts to use such challenges as tools to interpose unjustified delay.”

The presumption that delays thwart justice in capital cases routinely comes up among death penalty supporters. Yet those delays often ensure justice for the condemned.

Since 1973, at least 165 condemned murders have been freed from death rows after their wrongful convictions were exposed. An average of more than 11 years passed between sentencing and exoneration, and for 27 of the exonerated, at least 20 years had passed since their conviction and sentencing.

In Gorsuch’s view, they should have been executed long before.

And that spotlights one of the inherent and insurmountable problems with the death penalty. One conservative analysis estimates that atleast 4 percent of the people on death rows across the nation are innocent of the crimes for which they face execution. With 2,738 people on death row nationwide (as of June 30, 2018, the last comprehensive tally), that means at least 110 of them are innocent.

Beyond capital punishment’s fundamental immorality, beyond its arbitrary application (it falls disproportionately on the poor and people of colour, and whether it is invoked depends more on the whims of prosecutors than the nature of the crimes), it is impossible to ensure that the government does not kill the innocent. Such a failed system must be scrapped.

Yet Gorsuch’s desire to limit appeals would make it more likely that wrongfully convicted people would get killed before they could establish their innocence.

Yes, states and victims’ families have an interest in seeing that sentences are carried out. But the bigger responsibility here is to justice itself, and that cannot be achieved under a system so susceptible to error and manipulation.