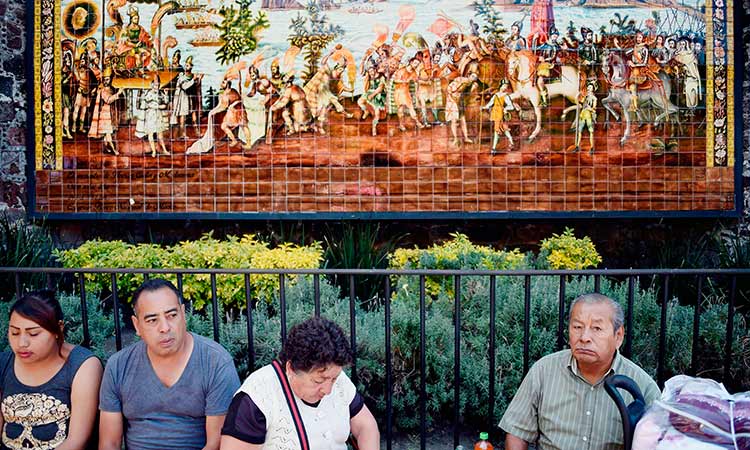 University of Michigan points out, for every $100 a typical white family has in wealth, “a typical black family has less than $10 in net worth”.

We all agree that apologising can be hard. But real apologies are necessary to building strong communities and futures. A few nations on this side of the Atlantic are wrestling with this on a national scale.

Earlier this week, Spain rejected a call by the Mexican President Andrés Manuel López Obrador for that nation — and the Vatican — to apologise for the abuses inflicted on the Mexican indigenous population during the Spanish Conquest. The leader of Spain’s centre-left party said that what happened 500 years ago cannot be judged ‘“in the light of contemporary considerations”. Many are dissatisfied with that response.

This debate — about who should apologise for history’s mistakes and how — sounds all too familiar to those of us who live in its northern neighbour, the United States.

America has been embroiled in an on-off discussion about slavery reparations since, well... the Civil War era. Martin Luther King talked about it weeks before his assassination; former US Representative John Conyers Jr introduced a bill to study — not enact — reparations in 1989. The bill never made it out of the house judiciary committee. He re-introduced it every year until he stepped down in 2017, and the result was the same.

Until now it felt like bar a few prominent universities acknowledging their ties to slavery, the concept of reparations, in which descendants of Africans who were enslaved as part of the Atlantic slave trade would be compensated financially and otherwise, was off-limits. Taboo. Because “the past is the past”.

These days, thanks to Democratic candidates who are keen to win the black vote — and a couple of well-placed thinkpieces by high-profile establishment writers in favour of reparations — the idea has entered the mainstream consciousness in a different way.

One could be forgiven for thinking the level of discourse has changed. But one question that has often been asked by pundits and the public alike suggests otherwise. That questions is: who would qualify for reparations in this day and age? The follow-up questions are just as perplexing: should The Affluent Blacks get reparations? What about The African Immigrants – and people who identify as mixed race or dual heritage?

These questions reveal an unwillingness by all Americans to fully accept the depth of slavery’s impact on their society. Most of today’s affluent African Americans didn’t become so with help from their parents or grandparents. As a recent study from the University of Michigan points out, for every $100 a typical white family has in wealth, “a typical black family has less than $10 in net worth”.

It’s additionally worth pointing out that power or fame rarely protect rich black people from racism. Just ask Lebron James, whose home was graffitied with a racist epithet in 2017.

To the question of mixed-race black Americans: while academics have suggested that a system could be created to verify if an individual self-identified as black, anyone who believes that there could be some ambiguity around one’s “eligibility” because the person in question has a white parent or grandparent should refer to the history books for their answers. Because of slavery, it’s probable, if not likely, that all descendants of Africans brought by force to the Americas have a white ancestor too. That would make them mixed-race, if we’re going to split hairs. Furthermore, identifying as black and white doesn’t magically erase one’s African ancestry. By that logic, one could argue that Frederick Douglass, a leader of the abolitionist movement, whose white father was also likely his slave “master”, would have to undergo a reparations test.

Proponents say reparations are about more than the money. They’re about repairing a nation that was and continues to be broken by the evils of the past. I believe it’s important that Americans continue this difficult conversation. And at the same time as coming to a place where tangible solutions can be made, it’s also important to nurture spaces where black Americans can shout, cry and heal — because, as Ta-Naheshi Coates wrote in 2014, until this society “reckons with our compounding moral debts, America will never be whole”.