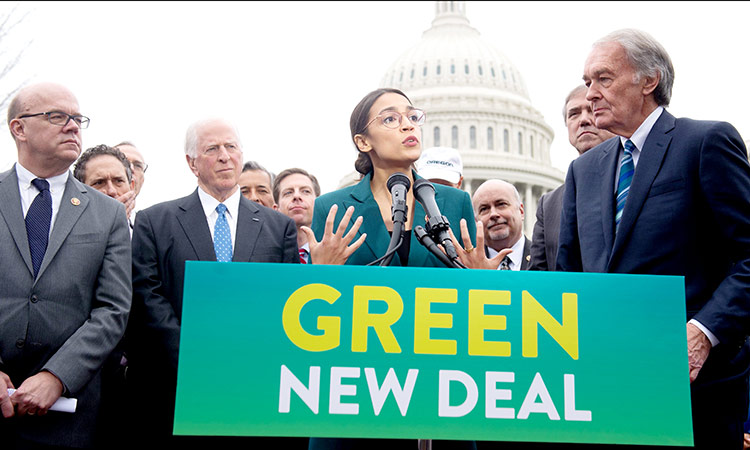 US Representative Alexandria Ocasio-Cortez and US Senator Ed Markey (right) speak during a press conference to announce Green New Deal legislation outside the US Capitol in Washington. File/Agence France-Presse

While most Senate Republicans are saying climate change is real, they’re struggling to come up with a comprehensive strategy for dealing with an issue that looms as a potential flashpoint in 2020 congressional election campaigns.

But Republicans were wary of supporting any plan that sounds likely to expand the reach of government.

“We’re not going to recommend an alternative takeover by the government of the economy,” Sen. John Cornyn, a Texas Republican, said, “but we should encourage innovation which will help clean the environment by providing incentives for that sort of research. It’s the same things we’ve always done.”

Another complication is that Republicans don’t agree on the scope of the climate change crisis. “There are those that think the Green New Deal is a moral imperative and it may well be,” Roberts said. “But farmers feeding the world is also a moral imperative.”

Even if the GOP came up with a big plan, it would require an OK from President Donald Trump, who’s not sure what’s causing the problem.

“I think something’s happening. Something’s changing and it’ll change back again. I don’t think it’s a hoax, I think there’s probably a difference. But I don’t know that it’s man-made,” Trump told CBS’ “60 Minutes” in October.

Sen. Rand Paul, a Kentucky Republican, had similar thoughts. “Most people on the alarmist side of this haven’t even thought this through at all,” he said. “I do know that all the people who blame everything on man have completely ignored the fact of what nature did before man.”

How to fight climate change is emerging as an important issue in 2020 congressional elections.

A December Quinnipiac University poll found 61 per cent thought extreme weather events of the past few years are related to climate change. Two-thirds of those polled by NBC News and The Wall Street Journal that month said immediate or some action should be taken to curb climate change.

The issue is of particular concern to younger voters. About two-thirds of those 18 to 34 years old say climate change stands to have “a significant negative effect on the world” during their lives, well above the numbers registered for other age groups.

The issue could be particularly crucial in Democratic primaries. Quinnipiac found 92 per cent of Democrats were very or somewhat concerned about climate change, compared to 36 per cent of Republicans.

Republicans are defending vulnerable Senate seats in states hard-hit by those trends in recent years, notably Georgia, Colorado, North Carolina and Iowa. Democrats need a net gain of four seats next year to win control of the Senate, three if a Democratic presidential candidate wins.

In the House, where Republicans are likely to need a net gain of 18 seats to win control, they face tough races to regain four Democratic-held districts in New York, four more in New Jersey, three in Iowa and two in Virginia, all areas where climate change is an important topic.

The Democrats’ Green New Deal, spearheaded by Rep. Alexandria Ocasio-Cortez of New York and Sen. Edward Markey of Massachusetts, is a series of broad goals meant to stem the effect of climate change. It has turned into a fierce political weapon for both parties.

Republican leaders on Tuesday forced a vote on the plan, trying to embarrass Democrats into going on the record on a proposal that GOP leaders claimed will require the government to make major decisions directly affecting how constituents live, play and work. The plan died when it failed to get enough votes to cut off debate.

“So my Democratic colleagues’ brilliant new idea — their rallying cry — is snatching away the energy sources that middle-class families use,” charged Senate Majority Leader Mitch McConnell of Kentucky.

He argued that the Democrats’ plan would mean “shuttering the industries that provide many of those families with their livelihoods, changing the homes they live in, the cars they drive, and the health care plans they rely on.”

So what’s the Republican alternative? “There are solutions and Republicans will continue to offer them,” said Sen. John Barrasso, a Wyoming Republican who chairs the Senate Environment and Public Works Committee.

He’s stressing “innovation, not regulation,” and said using nuclear energy and carbon capture as ways to reduce emissions. Carbon capture is a process where carbon dioxide waste is taken somewhere so it does not affect the atmosphere.

Other approaches are being floated. Sen. Lamar Alexander, a Tennessee Republican, this week offered a comprehensive plan to combat climate change. He unveiled a “New Manhattan Project for Clean Energy,” a five-year plan aimed at easing carbon emissions and promoting cleaner energy. Alexander said major elements of his plan could be achieved through the federal budget process. Other Republican senators, including Lindsey Graham of South Carolina and Mitt Romney of Utah, have expressed interest in developing a broad approach.

Production and investment tax credits have also been approved for wind, solar, and other clean-energy sources. Tax incentives pushed by Republicans have helped promote clean fuels, such as biodiesel, cellulosic ethanol, compressed natural gas, and other alternative fuels.

To reduce emissions, the GOP has pushed incentives for energy-efficient new homes, commercial buildings and schools, and retrofitting existing structures with energy-efficient windows, appliances, and heating and air systems.

Scott’s work with Sen. Marco Rubio, a Florida Republican, on the South Atlantic Coastal Study to help states plan for and mitigate the effects of rising sea levels was a “practical” solution to a climate change-related issue, said Ken Farnaso, Scott’s spokesman.

All in all, go slowly and carefully on all these ideas, urged Kentucky’s Paul.

“We should minimize emissions,” he said, “but we shouldn’t act as if the planet is going to die next year.”