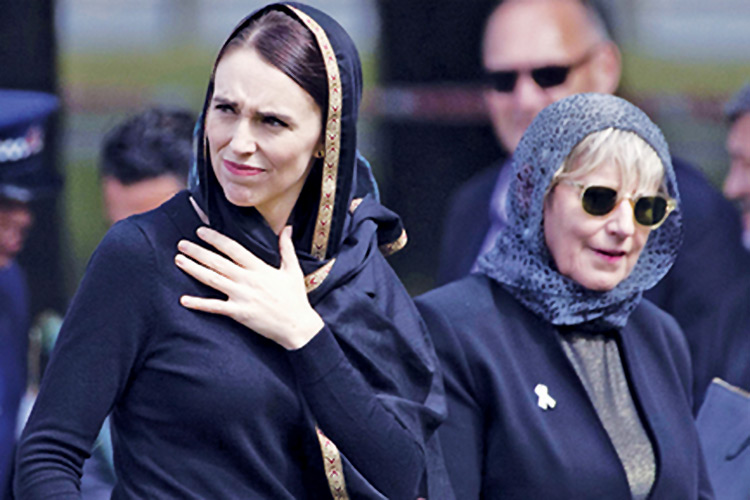 The image of New Zealand Prime Minister Jacinda Ardern hugging a grieving Muslim woman projected onto the face of Dubai’s Burj Khalifa, the world’s tallest building, was a moving tribute to an honest and brave politician attempting to deal with horrific violence against Muslims. Ms. Ardern and her country have been globally praised for the empathy, support and protection given to Muslim citizens following the attack by an Australian white extremist that killed 50 Muslims attending prayers in two Christchurch mosques two weeks ago.

A second tribute came in the form of an open letter from 13-year old Summer Joyan, an Australian Muslim schoolgirl, who called on Ms. Ardern to become that country’s prime minister and said she should be awarded the Nobel Peace Prize.

“Many world leaders could learn a lot from the way you have held your nation together and comforted those who are grieving,” Summer wrote. She pointed out that in her high school “not a single teacher or figure of authority even mentioned the attacks. They don’t acknowledge that a white supremacist murdered 50 innocent Muslim men, women and children in a usually peaceful place of worship. They didn’t offer support or reach out to the Muslim girls in my school or even provide counselling services for grief and support.”

Then she asked, “Can you imagine the comfort that my Muslim friends and I felt, knowing there was one leader in a neighbouring country (who) was on our side? If only more politicians had the courage to stand up to injustices...”

Ms. Ardern not only consoled Christchurch Muslims and victims’ families but also committed New Zealanders to the battle against white radicalism and banned the type of assault weapons, munitious and mechanisms to boost fire power that slew and wounded so many innocent civilians in Christchurch. Furthermore, she acted without making the political calculation that her stands would make her unpopular with domestic racists and gun owners. Since Muslims amount to 1 per cent of New Zealand’s population, they cannot match the potential votes of these two groups. Ms. Ardern also ordered a royal commission of inquiry, the country’s highest form of investigation, to “get to the bottom of how this act of terrorism occurred and what, if any, opportunities we had to stop it.”

Ms. Ardern, 38, the world’s fifth youngest national leader, is both compassionate and trend-setting. She is the world’s second prime minister to have given birth while in office; the first was Pakistan’s Benazir Bhutto. Last September Ardern took her three-month old daughter, Neve, to the opening of the UN General Assembly session. The first infant to attend the Assembly, Neve had her own UN entry badge. Neve’s presence was appropriate as Ms. Ardern gave her UN debut speech to the children’s agency summit where she reiterated her determination to end child poverty and make New Zealand the best place on the planet to raise a child.

While she governs the country, Ardern’s partner Clarke Gayford, who presents a fishing programme on television, has assumed the task of being Neve’s primary carer. Although the state had set aside funds to provide for air travel for the baby and carer, Ms. Ardern said she would pay for their flight to New York and other expenses while there.

Ms.Ardern froze legislators’ salaries for a year and compelled ministers to share rides to events in efforts to cut government expenses. She takes her child to work rather than hiring minders. Her pre-Christchurch massacre performance had been criticised by stumbles over the New Zealand economy and efforts to build affordable housing. At the moment she is above reproach.

The term “Jacindamania” was applied to Ms. Ardern when she assumed the job of leading her country’s Labour party in 2017. Although detractors argued she was “all style and no substance,” she demonstrated the steel beneath her stylish mode and manner when she proclaimed New Zealand’s Muslims “us” and set in motion the process of legislating a ban on assault weapons.

Suzanne Moore wrote in The Guardian, “..it is clear she is a lioness and that to call so many of our current leaders donkeys is a disservice to hardworking donkeys the world over.” She compared Ms. Ardern’s actions with Donald Trump’s militarism and British Prime Minister Theresa May’s failure to show empathy to the victims of the June 2017 tragic Grenfell Tower blaze which killed 72 and injured 70.

Born in July 1980, Ms. Ardern, a life-long Labourite, became her country’s prime minister in October 2017. After graduating from university, she worked as a researcher in the office of Prime Minister Helen Clark, the second woman to hold that post. Ms. Ardern is a social democrat and a progressive like the three new Democratic Party stars of the US House of Representatives, Alexandria Ocavio-Cortez, Ilhan Omar, and Rashida Tlaib, as well as Bernie Sanders and a number of his rivals for the US presidential nomination.

Ms. Ardern grew up in towns where her father was a police officer and mother a school catering assistant. She joined the Labour party at 17, became a leader in the Labour youth movement, worked as a volunteer in a charity soup kitchen in New York City and moved to London to take up a job as policy adviser of former British Prime Minister Tony Blair. In early 2008 she was elected president of the International Union of Socialist Youth, a role that took her to Jordan, Algeria, China and Israel. She has served in New Zealand’s parliament from 2008 until the present.

On world issues, she supported the UN resolution criticising Trump’s decision to recognise Jerusalem as Israel’s capital which she said took the world “backwards” rather than forward. She has expressed concern over the ethnic cleansing of Rohuingya Muslims in Myanmar and has offered her help to Aung San Suu Kyi to resolve the Rohingya issue.

Until the Christchurch massacre, Ms. Ardern was accused of being accessible and kindly but weak. She responded by telling the BBC, “It takes strength to be an empathetic leader.” Indeed.