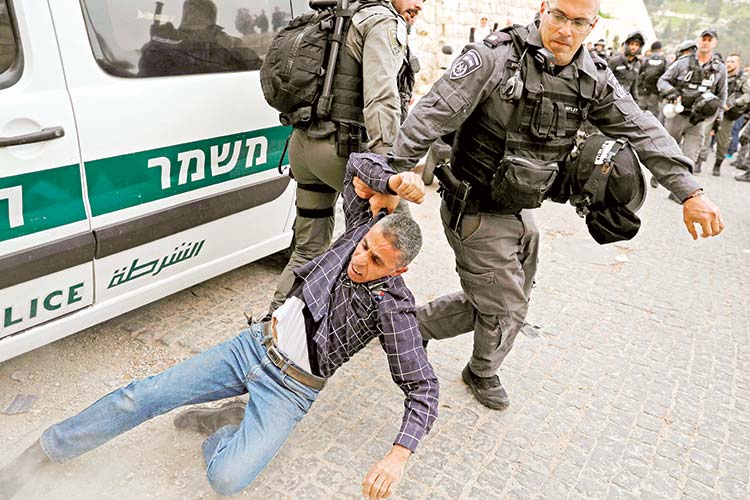 With the world attention focused on other issues, the international community has largely ignored the despair inflicted on vulnerable Palestinians by the Israeli occupation forces. This is a dangerous signal, as it would only encourage Israel to continue with its rampant violations of international and humanitarian law.

Depriving millions of Palestinians of access to a regular supply of clean water, stripping their land of minerals in an apparent act of pillage, full-steam expansion of settlements in the West Bank, which the United Nations and most countries deem illegal, are among the several continuing atrocities being committed by Israel, as elucidated by Michael Lynk, UN special rapporteur on human rights in the Palestinian territories.

Israel is unabashedly inducting some 20-25,000 new colonists a year and blindly allowing such large-scale illegal land grabbing amounts to gross injustice for the Palestinian people.

Israel’s theft of Palestinian property has been continuing for too long and it has not faced any pressure on accountability.

For nearly five million Palestinians living under occupation, the degradation of their water supply, the exploitation of their natural resources and the defacing of their environment, are symptomatic of the lack of any meaningful control they have over their daily lives, as Lynk points out.

It is disgraceful that the Dead Sea and its plentiful natural resources, part of which lies within the occupied Palestinian territory, is off-limits to any Palestinian development while Israeli companies are permitted to harvest the minerals in an apparent act of pillage.

There is a dire need for the rest of the world to take a serious note of the impending humanitarian catastrophe in Gaza linked to the stifling restrictions on the Strip’s residents.

What is adding to the worry is that the collapse of the coastal aquifer, the only natural source of drinking water in the Strip and now almost entirely unfit for human consumption, is contributing to a significant health crisis among the two million Palestinians living there.

The World Health Organization has already reiterated concerns that the sheer magnitude of trauma needs in Gaza is immense; every week injured patients continue to arrive at hospitals requiring complex long-term treatment.

On the ground, Israel is deliberately making the situation worse with the killing of more and more Palestinians. The cruel killing of three Palestinians in the occupied West Bank districts of Nablus and Ramallah on Wednesday is hugely condemnable. More needs to be done for the protection of Palestinian people.

The UAE, on its part, deserves praise for renewing its stance towards the legitimate rights of the Palestinian people, by continuing its humanitarian support totalling $1 billion, which was provided from 2013 to the end of 2018.

As Obaid Salem Al Zaabi, Permanent Representative of the UAE to the UN in Geneva, well pointed out, abandoning the Palestinian people will only continue their suffering from violations of international and humanitarian law, as well as the denial of truth, rights, justice and international legitimacy.

The continuing widespread violations of human rights in the Occupied Palestinian Territory, including East Jerusalem, exposes Israel’s abject disregard to international law. The occupation forces would view any more silence on the part of the world community as not only a sign of weakness, but also concurrence.