Pakistan after Imran Khan is more of the same - GulfToday

Pakistan after Imran Khan is more of the same 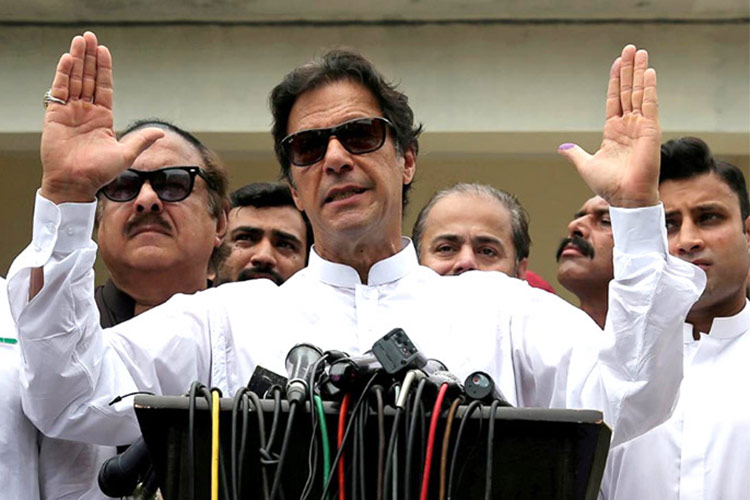 Imran Khan, chairman of Pakistan Tehreek-e-Insaf (PTI), speaks after voting in the general election in Islamabad on July 25, 2018. File/Reuters

The street smart tactics of the Pakistan army — played out by Prime Minister Imran Khan at its behest — to somehow diffuse the overwhelming pressure of international opinion blaming it for collusion with militants, are not doing much for it this time.

It was an unprecedented setback for Pakistan’s deep state when India got instant support — open or implicit — from the international community for its “preemptive and non- military” strike on the training facility of Jaish-e-Mohammed far inside Pakistan’s territory.

What has followed is a series of inconsistent responses from Pakistan’s policy makers. The Indian Air Force (IAF) bombing at Balakot — coming as it did as a declared reprisal by India against the terror attack on CRPF troopers in Pulwama — was viewed with a sense of “understanding” by the entire democratic world, led by the US, as a legitimate operation since it was carried out in the backdrop of calls being made by the world community to Pakistan — over a long period — to stop providing safe havens to terrorists on its soil.

Since Pakistan army was trying to pull wool over every body’s eyes by pretending that the Islamic outfits instigating terror across Indo-Pak border in Kashmir and elsewhere were “non- state” actors not in its control, India’s stand that Balakot was not an attack on Pakistan made sense to all, much to the frustration of Pakistan.

Pakistan’s references to “escalation” did not cut much ice and even its desperate attempt to use F-16 bombers on a military target on the Indian side of the Line of Control (LoC) on the day following Balakot received a cold snub from all the countries as an unjustified bravado.

The focal point of accountability on Pakistan’s ruling dispensation remains on the lack of effective action against the militant outfits operating from within that country. The world opinion has hardened on this issue as the developments in the United Nations Security Council (UNSC) with regard to naming Maulana Masood Azhar, the chief of JeM, as an international terrorist amply demonstrated, notwithstanding the fact that China has once again blocked the decision with its veto.

Imran Khan in a statement earlier had reiterated that “he pledged not to allow Pakistani soil to be used for terror directed at other countries” which seemed to be a part of the wishy washy announcements of his government about “restrictions” placed on Jaish and the Lashkar-e-Taiba (LeT) front Jamaat-ud-Dawah.

Meanwhile, US National Security Advisor John Bolton has called upon Pakistan Foreign Minister once again to ensure “meaningful” action against terrorists who had attacked India. India has to critically assess the impact of the US intervention.

Imran Khan has — unsurprisingly — used the current situation to encroach on India’s domestic politics by alleging that the Narendra Modi government was engaging in “the politics of hatred” with an eye on the upcoming general elections in India.

He openly accused Prime Minister Modi of “dividing people for votes” and went on to state that after Pulwama, hatred was being spread against a community because of which Kashmiris were targeted in many parts of India.

Pakistan has been trying to fish in the troubled waters of Indian electoral politics in a manner that creates a convergence between what its leaders propagate and the anti- Modi tirade that the Opposition in India made on the issue of “protection of minorities” here.

Pakistan is consciously indulging in the dangerous game of suggesting that there was a sense of identification between Muslims of India and Pakistan and that the minority community here should help to pull down the Modi regime. Imran Khan had stated sometime back that he looked forward to dealing with a new dispensation in India in 2019.

Fomenting terrorist violence by exploiting faith-based motivation should be condemned by one and all and the question of who should be given credit for the military operation against the Jaish establishment at Balakot should be debated with political finesse and not political bias.

Balakot underscores a strategic response to the serious threat of cross-border terrorism facing India and any critique of the same should be kept free of communal overtones.

We should not fail the world community that is seized of this threat at the global level by throwing up internal political divisions on matters of national security. Indian diplomacy is going to run into the challenge — sooner than later — of Pulwama and Balakot events being flagged by other countries as the ground for resumption of dialogue between India and Pakistan.

China has expectedly taken the lead in recommending talks between the two countries for “long term improvement in bilateral ties.” China, unlike the US and many other major countries, is keen to bail out Pakistan which faced isolation on the issue of Islamic extremism and terror and India has rightly demanded “credible, verifiable and sustained actions” against terror outfits in Pakistan.

However, we must be specific about calling for effective punitive action against both Hafiz Sayeed and Masood Azhar for their involvement in the 26/11 and Pulwama attacks, respectively, and make it a condition for a possible resumption of dialogue with Pakistan.

External Affairs Minister Sushma Swaraj has done well to dare Imran Khan to hand over Masood Azhar to India if he was serious about taking action against terrorists. India has to keep up its alignment with the US, the UK, France, Japan, Australia, Russia and the Gulf countries on the issue of putting down terrorism.

Securing convergence between India, the US and Russia on the future of Afghanistan should also be an important aim of our diplomatic endeavours. The Pakistan army-ISI duo have realised that the line “you give me evidence we will proceed” had this time failed to impress any body and they are therefore trying to hoodwink the international community by pretending to put curbs — administrative and financial — on the terrorist outfits.

They plan to brave through the world pressure and apparently feel convinced that they could continue with their efforts to create political destabilisation in Jammu and Kashmir and keep the pot boiling there.

Pakistan knows it cannot take on India in a conventional war but has reasons to believe that it could indulge in its covert offensive on LoC to keep the limelight on the Kashmir issue. India has stronger justification after the Balakot strike to follow an “offence is the best defence” approach in dealing with any ceasefire violations. With the onset of summer, Pakistan would be tempted to step up infiltration of terrorists into the valley — notwithstanding the fact that strong action against separatists and pro-Pak elements would have shrunk the circle of support that Pakistan had enjoyed there so far.

For India, there is no looking back on the mission of eliminating the last terrorist gun in Kashmir, neutralising the Pakistan agents there and developing J&K as a democratically governed state that is economically self sufficient, socio-politically harmonious and viable as a multi-religious entity.