How big and little lies prop up the ‘American dream’ - GulfToday

How big and little lies prop up the ‘American dream’ 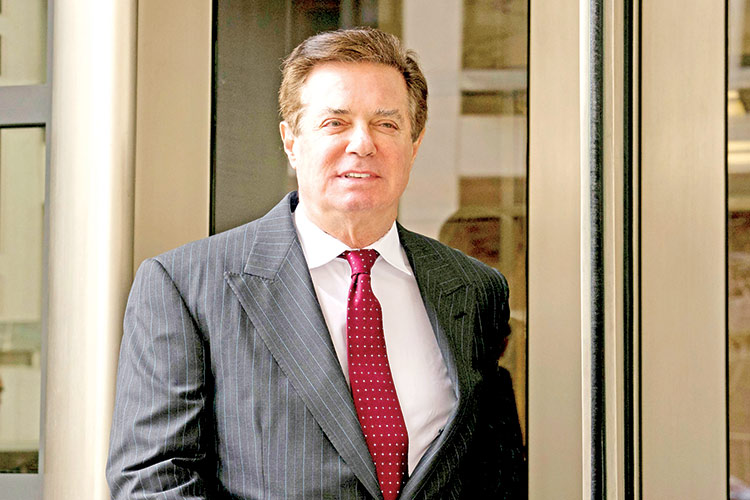 Paul Manafort was indicted for mortgage fraud in New York.

In the 1944 film “Gaslight,” a greedy Charles Boyer, trying to convince his rich, naive wife Ingrid Bergman that she is insane, dims and brightens the gaslights in their home, while insisting it is a figment of her imagination. Today, the term “gaslighting” has come to mean that same psychological manipulation.

America is being “gaslighted.” How else could it maintain an unshaken belief in the “American dream,” that if you work long enough and hard enough, you can achieve anything? In order to believe in the triumph of a meritocracy, a country with an even playing field, you must ignore the lobbyists, PR specialists and boatloads of money that smooth out any rocky road for a select few. And your mind must obliterate every bit of this country’s history.

In campaigns leading up to the 2020 presidential election, the growing wealth gap looks to be a major issue, with each side fighting to define how much of a problem it is and how best to insure benefits and resources are fairly shared. Who is and is not deserving is an argument that has long been a part of the political back-and-forth. What Republicans label “socialism,” Democrats call inclusion.

In truth, access to the “dream” is rigged, with the wealthy benefiting. If you did not believe it before, even after last year’s tax cuts, recent events must surely have convinced you that it’s not all your head — the gaslights really are flickering.

Last week, it was the announcement of a 47-month sentence for Paul Manafort, President Trump’s former campaign chairman, after he was found guilty of orchestrating a multimillion-dollar fraud. It was far less than the sentencing guidelines for his crimes, and fell short of, for instance, the five-year sentence doled out to Crystal Mason, the Texas woman on supervised release from prison who mistakenly cast a provisional ballot, which was not counted.

When Judge T.S. Ellis, in the Manafort trial, called the guidelines “excessive” and said Manafort had led an “otherwise blameless life,” did he look past the convicted felon in the defendant’s chair and see someone relatable? Did he feel an empathy that he might not for someone not of his race and social and economic class?

This week, the growing scandal involves wealthy parents — celebrities and business leaders — illegally in cahoots with college coaches and test administrators, accused of bribery, cash payouts and participation in elaborate schemes to give their already privileged offspring a well-financed push into elite institutions.

Of course, it’s always been easiest to get into college if your family has a campus building named after it, or if your father, mother, grandfather or other relatives attended — what’s called the legacy option, not a possibility for those whose ancestors weren’t allowed in, except perhaps to clean or serve food.

Legal advantage already goes to those able to afford private schools, coaching, expensive test prep and help writing the all-important essay. Is it cynical to think Charles Kushner, Jared Kushner’s father, might have had more than pure-hearted philanthropy on his mind when he pledged $2.5 million to Harvard University, where his son coincidentally landed?

Yet for so long, a false narrative has posited that the privileged belong in those spaces, almost as a birthright, and if anyone is getting an unfair advantage, it must be minorities taking the place of the truly deserving. Never mind that except for the very few, minorities were seldom considered in elite institutions’ long histories.

It takes some major gaslighting to turn the long-excluded into the villain, though when it come to framing negative perceptions of its minority citizens, America has had a lot of practice.

The president has stirred this pot of resentment with his repeated unfounded accusations that former President Barack Obama, the man whose very American-ness Trump questioned, somehow did not earn his place at Columbia University. Trump has suggested that Obama, the man elected to be first black president of the Harvard Law Review, had no business being on that Ivy League campus in the first place. In a 1990 New York Times story reporting his achievement, Obama saw the situation clearly when he said, “You have to remember that for every one of me, there are hundreds or thousands of black students with at least equal talent who don’t get a chance.”

Now prosecutors have shown more ways that many hard-working, talented students never got a chance because wealthy parents may have cheated.

We also know that Trump, master gaslighter, who often is guilty of the sins he casts on others, bragged about being a “stable genius,” when, during his 2016 presidential run, his employees were tasked with covering up and hiding his own grades and test scores from military school and beyond. His former lawyer Michael Cohen described letters and phone calls that were both pleading and threatening, testimony confirmed by Fordham University. I’m guessing that the academic record of the real estate magnate son of a real estate magnate was nether bad nor great, just ordinary, not something Trump could abide.

While that revelation caused more than a few jokes, none of this is harmless, not when policy reflects this manipulative shading of the truth, also known as lies. More people are hurt than students with great records rejected to make room for those whose parents buy their way in.

In the Trump administration cabinet, Education Secretary Betsy DeVos, before, during and after a brutal confirmation process, has made clear her desire to provide easier means to escape public schools for private, charter and religious alternatives. What’s the difference when falsehoods about the desire to learn in the children left behind and the concern of the parents advocating for them are baked into the American narrative?

In his 2020 budget plan, the president proposes a 12 per cent decrease in the Education Department, including taking $2 billion out of reserves for federal Pell Grants, used primarily by students whose families earn less than $60,000 a year. The Supplemental Nutrition Assistance Program also takes quite a hit.

It’s difficult to sustain support for such measures unless blame for low wages, disappearing manufacturing jobs or kids missing out on a dream college can be shifted to the poor, minorities and immigrants who have far less influence than an inequitable system taking advantage of all.

As the trappings of privilege become ever bolder and are exposed, it gets harder and harder to fool all of the people all of the time, to misquote Abraham Lincoln, who did pretty well without a fancy degree.

Unlike Ingrid Bergman, we may not need Joseph Cotten to save the day. If the outraged reactions to the latest scandals are any indication, Americans may finally stop falling for the same old story.