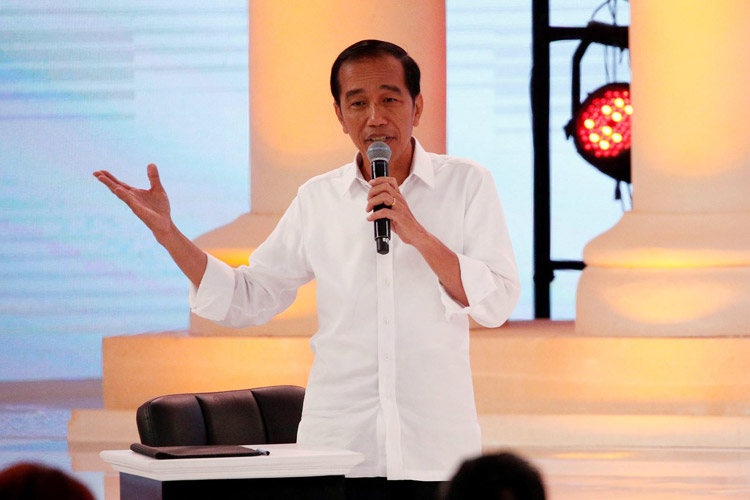 JAKARTA: With just over a month to go to an Indonesian election, President Joko Widodo holds a double-digit lead over his challenger, retired general Prabowo Subianto, according to an opinion poll released this week.

The April 17 election in the world’s third-largest democracy will be a re-run of the 2014 race, which saw Widodo beat Prabowo by almost six per centage points.

Widodo appears to be enjoying an advantage as the incumbent this time, with several recent surveys showing him likely to win about 55 per cent of the vote, while Prabowo - as he is known in Indonesia - trails with about 32 per cent.

The number of undecided voters had dwindled to about 13 per cent from nearly 25 per cent a few months ago, Saiful Mujani Research and Consulting (SMRC) said in a survey conducted at the end of January and released this week.

“There is no element of surprise that’s hard to quantify in this election. The economy, politics and security are stable so it’s hard to see any significant game changer in the next month,” said Djayadi Hanan, a researcher at SMRC.

Several other pollsters, including Populi Center, Cyrus Network, and Australia-based Roy Morgan, also showed Widodo with a similar lead over his rival based on surveys conducted in January.

The six-month campaign began slowly but has picked up pace in recent weeks with televised debates between the candidates and rallies across the archipelago of more than 17,000 islands.

Some analysts have said the debates have been a missed opportunity for Prabowo, who has struggled to land any big blows against the president, who has appeared workman-like and sought to stress the achievements in areas such as infrastructure construction while in office.

The challenger’s running mate, private equity tycoon Sandiaga Uno, has appeared to generate a buzz on the campaign trail while also proving popular online, especially among young voters and women.

Widodo saw a strong lead nearly wiped out in the last election amid a smear campaign of false accusations that he was not a Muslim and the son of Chinese communists - both sensitive issues in the world’s largest Muslim-majority country.

To bolster his religious credentials, Widodo has picked as his running mate a senior Muslim cleric, Ma’ruf Amin.

“The opposition has found it hard (but not impossible) to use identity politics attacks against Jokowi in this election, following the selection of the Islamist Ma’ruf Amin as the president’s running mate,” Eurasia Group said in a note, referring to the president by his nickname.