A special moment for UAE - GulfToday

A special moment for UAE 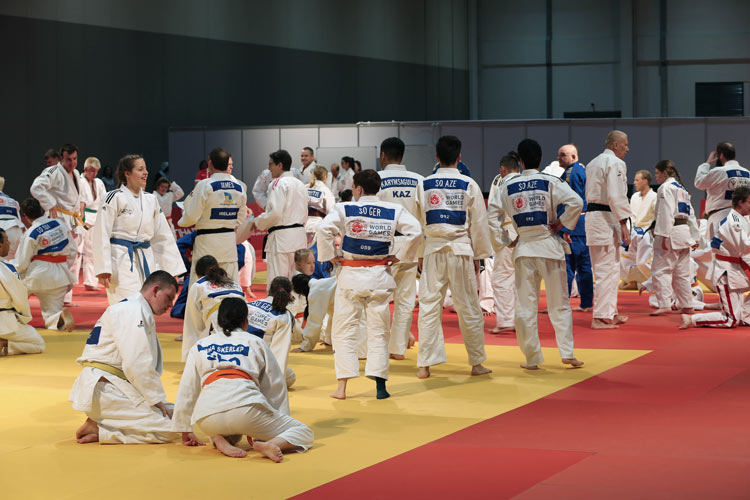 Atheletes participate at an event in Abu Dhabi. WAM

Even as more than 7,500 Special Olympics athletes from over 190 nations and 3,000 coaches make final preparations to participate in the Special Olympics World Games Abu Dhabi 2019 taking place from March 14 to 21, the event itself will be exceptional because the huge participation makes it the largest Games in its 50-year history. The participants will compete in as many as 24 individual and team sports.

Also, the record number of female athletes expected to participate in the Games makes it more special. Almost 40 per cent of the athletes competing in the World Games will be women, with over 2,800 females due to take to the playing field.

Some 412 female athletes showcasing their sports skills to the world will be from the Middle East and North Africa region. Of those, 55 are Unified Partners who are looking forward to playing side-by-side with their team-mates of determination. There will be 154 female coaches from the Mena region.

The idea is that societies should be all inclusive with each and every individual getting equal opportunities without any discrimination.

It is known that people with intellectual disabilities face significant challenges accessing quality health care, resulting in pronounced health disparities, reduced life expectancy, and violations to their access to health as a human right.

Taking a special note of this point, prior to the official opening, the Special Olympics will host a Global Inclusive Health Forum. Over 100 global health leaders will come together to ensure community health workers are adequately equipped with the knowledge, skills and attitudes required to provide quality health care for individuals with intellectual disabilities.

The goal of Special Olympics itself is to facilitate the reform of health systems to improve access to health for 11 million individuals with intellectual disabilities by 2020.

An attempt is also being made to build bridges between people with and without disabilities through the power of art. Photographs, paintings, sculptures and artworks created by artists with and without intellectual disabilities will be displayed at Abu Dhabi’s Emirates Palace hotel as part of an Inclusive Art Gallery project.

Work by local and international artists will be featured in the Gallery, which celebrates inclusion and the talents of People of Determination. Among the collections featured in the Gallery would be artworks created as part of the Unified Art Workshop series that were held over the past months at Manarat Al Saadiyat in Abu Dhabi.

Mawaheb, the Dubai-based art studio for People of Determination, will also be contributing a selection of artworks to the Gallery. It includes other artworks created by the community including Emirates Autism society, Goals UAE, the Abu Dhabi-based Black Canvas Community art group, and works by the acclaimed Emirati artist Abdulla Lutfi.

Adding glitter to the event, a number of widely acclaimed music stars and producers, including Grammy Award winner for The Greatest Showman Soundtrack, Music Producer, Greg Wells, and Honorary Executive Producer and 28-time Grammy Winner, Quincy Jones, have come together to create the official song for Special Olympics World Games.

The anthem, titled Right Where I’m Supposed To Be, will be revealed for the first time at the Opening Ceremony. By hosting the mega event, the UAE is sending a brilliant message about the nation’s culture of inclusion.

It was His Highness Sheikh Mohammed Bin Rashid Al Maktoum, UAE Vice President, Prime Minister and Ruler of Dubai, who initially declared that people with special needs should be referred to as “people of determination” to recognise their achievements in different fields.

Sheikh Mohammed has always maintained that people of determination represent an integral component of the society and have the right to enjoy a happy and dignified life like other community groups.

As Sheikh Mohammed himself pointed out, hosting the Special Olympics reflects the trust placed by the entire world in the UAE, being a forward-thinking and multicultural centre of tolerance, faith and inclusion as well as a favoured destination for sportsmen and creative people.