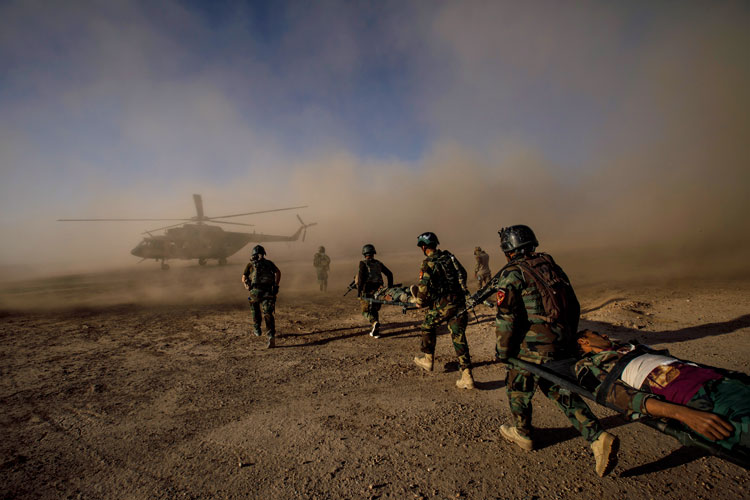 "America would be more secure and stronger economically if we recognized that we have largely achieved our objectives in Afghanistan and moved aggressively to bring our troops and tax dollars home," Sens. Rand Paul (R-Ky.) and Tom Udall (D-N.M.) write in an op-ed article. "Today, despite vast investment in training and equipping Afghan forces, the country's deep-seated instability, rampant corruption and, in some cases, compromised loyalties endure. Extending our commitment of combat troops will not remedy that situation."

The senators are right, just as they were right eight years ago when they penned those words for the New York Times with Sen. Jeff Merkley (D-Ore.). In the near-decade since, the White House has gained a new occupant from a different party, congressional control has shifted and the United States' 17-year Afghan war has been governed by ostensibly new strategies implemented by six different commanders. But the US stalemate in Afghanistan remains fundamentally the same: The war is still a costly and futile project that does nothing to serve US interests or move Afghanistan meaningfully toward political reconciliation or peace.

So little has changed in eight years that Paul and Udall this week introduced legislation that nearly duplicates their 2011 push for withdrawal. The 2019 American Forces Going Home After Noble (AFGHAN) Service Act has updated numbers — higher counts of US troops killed or wounded, and a larger tally of borrowed tax dollars spent and often wasted — but its core demand for a quick and responsible exit from the longest war in US history is unaltered.

All the senators' arguments against the war in Afghanistan — that it is a reckless strategic failure that benefits no one — are no less applicable now than they were in 2011. Just as then, those against withdrawal show no sign of ever wanting this war to end. And once again, Paul and Udall are faced with a president who has promised to bring American forces home but refused to commit to any reasonably expeditious timeline.

"Today, despite vast investment in training and equipping Afghan forces, the country's deep-seated instability, rampant corruption and, in some cases, compromised loyalties endure. Extending our commitment of combat troops will not remedy that situation.

That stagnation is a telling indictment of what passes for foreign policy in Washington. Too many policymakers seem incapable, if not unwilling, of considering the big picture, of asking whether continuing this war is in any sense good, useful, or even in conformity with the will of the people they ostensibly represent. There is plenty of energy for fiddling with the details — a few thousand more troops here, a new infrastructure project there, drone and other aerial strikes scaled up or down or back up again, with civilian casualty rates following suit.

But in the task of adjusting anything more substantive than tactics in Afghanistan, Washington is generally content with stalemate or slow loss. A war undertaken right after 9/11 has devolved into a generational conflict; it is now being fought by soldiers born after the terrorist attack that precipitated it. And though, according to an October study from the Charles Koch Institute, 57 percent of Americans — and 7 in 10 veterans — support a full US withdrawal from Afghanistan, our government has no such clarity.

President Trump, like President Obama before him, campaigned on shuttering reckless wars of choice, lambasting mission creep and the ineffectual nation building it so often entails. Yet neither president has succeeded in pushing past the inertia of what's been called the foreign policy "blob" — the Washington establishment who, as one pundit put it, "whine ceaselessly about the collapse of the American security order."

While the rest of the country is past ready to move on, the locus of Washington's foreign policy conversation about Afghanistan (and our half a dozen other conflicts in the Mideast and North Africa) is about the scale at which military intervention should continue forever, not whether it should continue at all.

A less narrow and more realistic assessment makes evident what Paul, Udall and other voices crying in Washington's wilderness contend: There is no US-imposed, militarily enforced solution to Afghanistan's woes, and indefinitely prolonging our occupation cannot and will not change that. Our government is trying to bomb and spend Afghanistan into a political order that can only be achieved by those who must live with the outcomes, both through promising (if still uncertain) diplomatic efforts led by US special envoy Zalmay Khalilzad and through conversations among various factions of the Afghan people themselves.

Whatever course and time frame those negotiations may take, the business at hand for Washington remains the same: US military intervention in Afghanistan must come to an end. It would be an appalling — if not exactly shocking — state of affairs if this point must still be made another eight years hence.