The biggest oppressor is the state - GulfToday

The biggest oppressor is the state 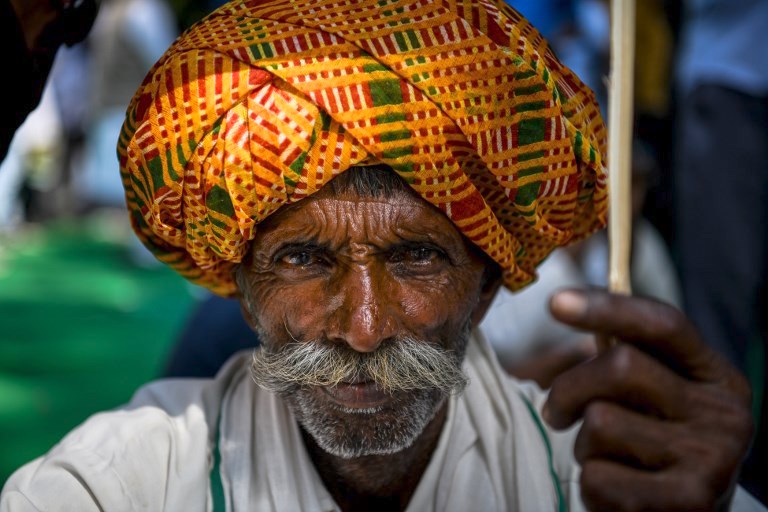 Indian farmer Ganesh Narayan, 55, looks on as he sits at a protest against the central government over various demand in favour of farmers in New Delhi. Agence France-Presse

Displaying a trifle uppish temperament, like most young people raised on abundant life, she was waddling and not really concentrating on her walk towards her seat. As a result she mistimed her step, put her right foot on a pebble, which was very small in size, as convincingly revealed by a subsequent discussion, but it was big enough to make her slip.

She was wearing a pair of shoes, which were made of leather. Those were the days when shoes weren’t pieces of coarse fabric, designed merely to protect your feet from rain and muck. They were major fashion statements. They were expected to declare your station in life to observers. Anyway, she did slip, but escaped a major fall.

One of her books went flying and landed on the space between two desks in our classroom. I helped her rearrange her books and papers and got talking. She gradually became an active member of the university canteen gang. In one of the sessions, she argued: Listen guys, the biggest oppressor is the state. She was perhaps influenced by German philosopher Friedrich Nietzsche.

I remembered the words when I read last week a government’s decision to grant all farmers Rs6,000 per year. That amounts to Rs500 per month, which means Rs17 (90 fils) per day. And with Rs17 one can buy 250 grams of rice, enough only for a meal for three.

The much-hyped election season grant is indeed more of an insult than a favour to the farmers, who have been committing suicide triggered by insurmountable loans. Can anybody top that oppression? Certainly not. Our classmate, now a bureaucratic heavyweight, had hit the nail on the head.

Well, every moment I feel that there’s something terribly wrong with the social order. After all, the blueprint for it was laid down by man, indiscipline’s most exciting fallout.

It’s really funny that we allow chefs to flourish and farmers to perish. Funny because farmers can do without chefs, but chefs can’t do without farmers. Yet, chefs appear on TV promoting their craft that’s essentially based on what the farmer grows, whereas the farmer appears on TV as a grotesque body after committing suicide. It is something that has been rocking some areas for years now.

The problem is that the most powerful of society’s guardians — government representatives — have not only not bothered to fix the fault lines but have also allowed them to widen. They are invariably located in rooms where the environment is conditioned and windows are sealed. Therefore, the stench of suffering never reaches them.