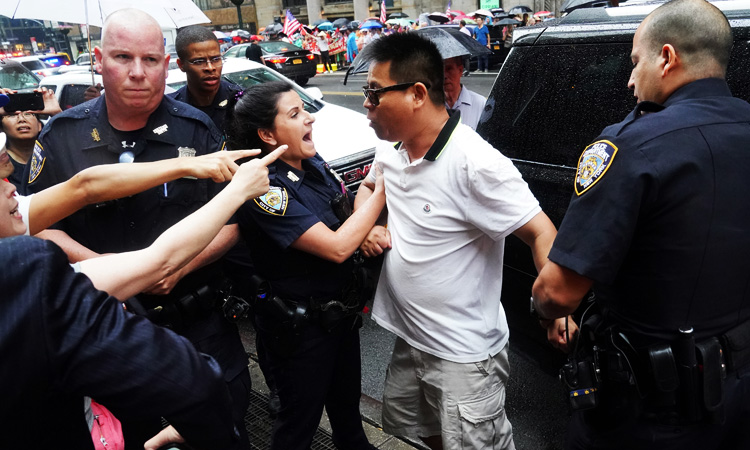 Police officers detain a man after scuffles broke out outside hotel, where Tsai Ing-wen is supposed to stay during her visit to the US on Thursday. Carlo Allegri/ Reuters

Taiwanese media broadcast footage of the clashes outside the Grand Hyatt, where Tsai is staying during her two-day US trip.

Opponents of Tsai — many waving Chinese flags — chanted slogans and fought with supporters, while one man was seen being detained and handcuffed by police.

Tsai is spending two days in New York ahead of a visit to diplomatic allies in the Caribbean.

Normally the head of a state passing through American soil would not spark controversy but Taiwan has long found itself in a precarious and unusual diplomatic situation.

The democratic island has ruled itself for seven decades but most countries do not recognize it — including the United States, which switched diplomatic recognition from Taipei to Beijing in 1979.

Yet Washington remains its most powerful unofficial ally and biggest arms supplier.

China sees Taiwan as part of its own territory and has vowed to one day seize it, by force if necessary.

It bristles at any countries that might lend Taiwan diplomatic support or legitimacy.

With the US currently engaged in a trade war with China, relations between Taipei and Washington have warmed considerably.

Unlike the last three American presidents, who were wary of angering Beijing, Donald Trump has ramped up relations with Taiwan.

Tsai transited through the US during a trip to the Pacific earlier this year, as well as last year’s visit to Paraguay and Belize, both prompting official Chinese protests.

“Taiwan will not succumb to intimidation,” her office said in a statement released as the US visit kicked off, without specifically mentioning China. “All difficulties will only strengthen our determination to go out to the international community.”

On Thursday evening Tsai met with envoys from the 17 remaining countries that still recognize Taiwan.

She will attend a business forum on Friday and meet students on Saturday morning before heading to the Caribbean.

Tsai will visit Haiti, St Vincent and the Grenadines, St Lucia, and St Kitts and Nevis, which all recognize Taiwan.

China has poached five of Taipei’s dwindling number of allies since Tsai became president in 2016.

Taiwan pledged a $150 million development loan to Haiti, while Beijing reportedly offered the Dominican Republic investments and loans to the tune of $3 billion.