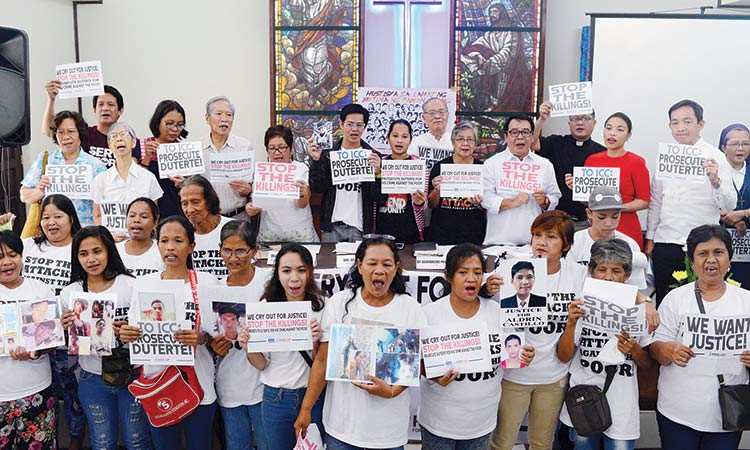 Activists and families of drug war victims display placards during a protest against the war on drugs by Rodrigo Duterte in Quezon city, Metro Manila. Reuters

The Human Rights Council voted 18-14 with 15 abstentions to approve the resolution on Thursday.

The measure, presented by Iceland, cites allegations of thousands of killings since President Rodrigo Duterte launched a campaign against illegal drugs in mid-2016.

The Philippines immediately rejected the resolution. The country’s ambassador in Geneva, Evan Garcia, said it “does not represent a triumph of human rights, but a travesty of them.”

Speaking shortly before the resolution was approved, Duterte called the text “crazy” but said he would consider allowing UN rights staff into the country.

“Let them state their purpose and I will review it,” he said.

It “provides hope for thousands of bereaved families in the Philippines, and countless more Filipinos bravely challenging the Duterte administration’s murderous ‘war on drugs’,” Amnesty’s regional director for East and Southeast Asia, Nicholas Bequelin, said in a statement.

The resolution had faced strong push back from President Rodrigo Duterte’s government, which counters that the toll has been exaggerated — its estimates say 5,300 have died — and that the crackdown enjoys widespread popular support.

Duterte’s three-year so-called drug war has unleashed a surge of bloodshed in the Asian island nation, with reports of nightly slayings of suspects by police and masked gunmen.

Activists said they had initially hoped the UN would demand a formal “inquiry,” but compromised on calling for a “report” to win a majority.

The text, proposed by Iceland, was backed by 18 states in the 47-member council, with 14 nations voting against and 15 abstentions.

It gives UN High Commissioner for Human Rights Michelle Bachelet a year to prepare a “comprehensive written report on the situation of human rights in the Philippines.”

Bachelet’s spokeswoman, Ravina Shamdasani, said the report would offer an opportunity to “get clarity around the contested facts, figures and circumstances” of the drug war.

When then UN rights chief Zeid Ra’ad Al Hussein raised concern about the drug war in 2016, Duterte called him an “idiot” and a “son of a bitch.”

The deputy Geneva director for Human Rights Watch, Leila Matar, described the resolution as “a modest but vital” step that “signals the start of accountability for thousands of ‘drug war’-related killings.”

In addition to calling for a report by Bachelet, the resolution raises concerns over other alleged abuses under Duterte, including “killings, enforced disappearances, arbitrary arrest and detention.”

The drug war, launched in 2016, is Duterte’s signature initiative, and he has often reacted with fury when outsiders have raised concerns about it.

Two gunmen believed to be “hired assassins,” shot and killed an outspoken broadcast journalist who was driving home aboard his car in North Cotabato province in Mindanao, police confirmed on Thursday.

Birrey said Dizon was driving his car on his way home to the town of Makilala also in North Cotabato when the two gunmen riding in tandem aboard a motorcycle fired at him several times along the national highway shortly after 10pm on Wednesday.

Although he was seriously hurt, Dizon managed to drive his car to the side of the road where he died from at least five bullet wounds on his body, according to Birrey.

If investigation would confirm that his killing was work-related, the National Union of Journalists of the Philippines (NUJP) said Dizon would be the 13th mediaman to be slain during the time of President Rodrigo “Rody” Duterte and the 186th since 1986 following the ouster of the late dictator Ferdinand Marcos. 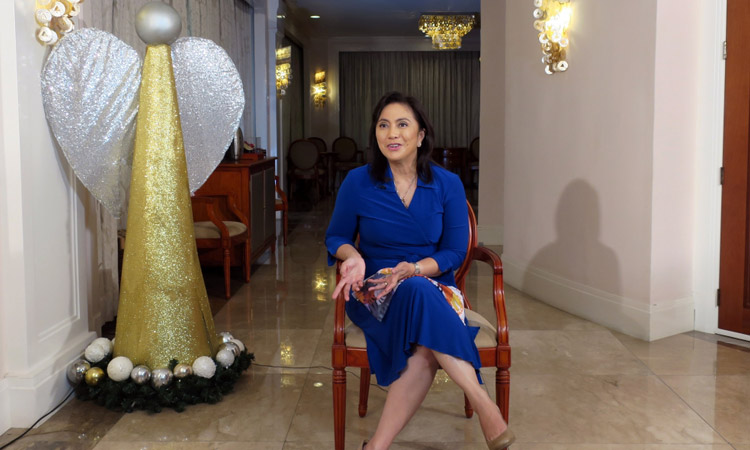