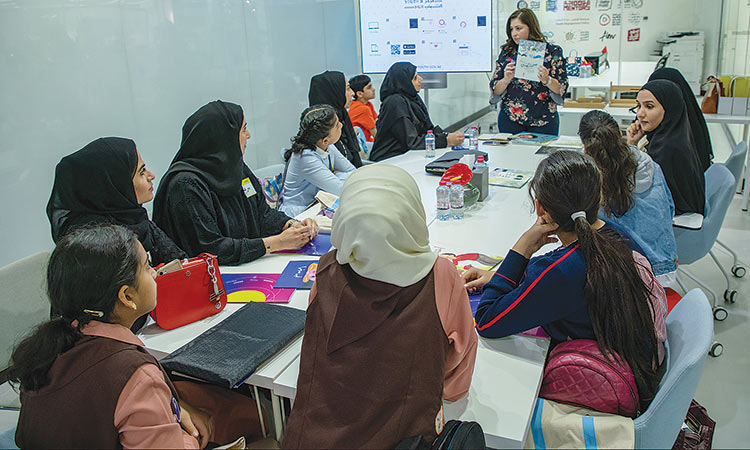 Authors attend an illustration workshop in Sharjah on Wednesday.

Kalimat Publishing, the Sharjah-based publishing house specialising in publishing children and young adult books, has introduced a host of women authors to the basics of professional writing for children. Kalimat’s team, along with two of their published authors, delivered specialised creative writing and illustration workshops at a creative event organised by Sxill, UAE’s training and workshop experts.

Under the mentorship of authors Sahar Naja Mahfouz and Maitha Al Khayat, participants explored creative writing techniques, gained first-hand insights into authors’ rights and learnt about ways they can develop a relationship with publishers. The stories will then be illustrated and produced by Sxill as children’s novels and distributed to their respective authors as a gift.

Kalimat also conducted an art workshop for children’s book illustrators. Participants were introduced to new and emerging techniques that can be applied to illustrations to reflect the messages of a story’s prose in easy and engaging ways for children.

Kalimat is an established name in the cultural landscape of the Arab World. It has won many local and international awards, including ‘Best Children’s Publisher of the Year in Asia at Bologna Book Fair 2016,’ ‘Sheikh Zayed Book Award,’ under the category ‘Publishing and Technology,’ in addition to other awards.

Kalimat announced the release of its six new titles at the 11th edition of Sharjah Children’s Reading Festival, SCRF, that ran from April 17-27 at Expo Centre Sharjah.

Marking the entry of Kalimat into the category of silent books, ‘’Al Hawa’’ expresses the idea of love in terms of forgetting, falling, and feeling love again. The story is told in form of a unique love story the embodies the idea of being consumed with life’s worries and troubles, and not being able to live up one’s dreams. However, a determination to succeed and continue to keep the dreams alive, saves the love story.