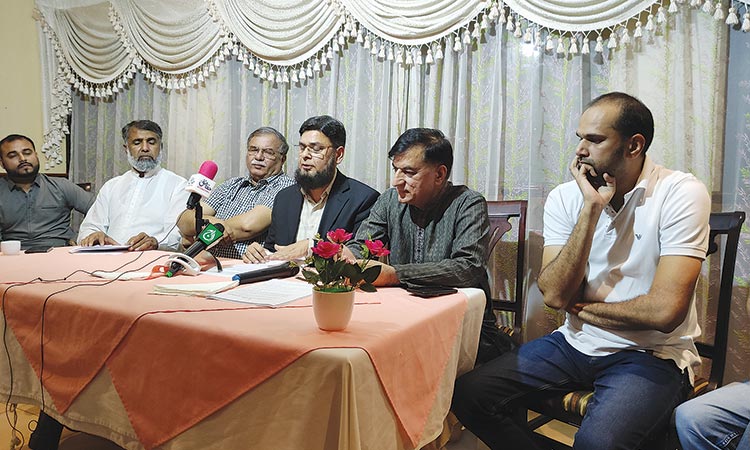 Victims of the DHA Valley Islamabad housing scheme interact with the media in Sharjah.

A group of Pakistani expatriates who invested in a multipurpose housing scheme in Pakistan – DHA Valley Islamabad, a private residential project – have appealed to the Government of Pakistan to resolve their long-pending issues including possession of plots after a delay of over 10 years.

The UAE has alone over 6,000 affected people out of overall 65,000 applicants who invested in the housing scheme launched in 2008. Every single applicant had paid approximately $13,000 and $16,700 against a residential plot measuring 5 Marlas (1 Marla=272 square feet) and 8 Marlas respectively.

The scheme was launched for all Pakistanis through a widespread media campaign and also attracted overseas Pakistanis in the UAE, Saudi Arabia and America to invest for their better future with promised good returns.

Ali Haider Zaidi, group leader of the affectees of DHA Valley Islamabad, while addressing a press conference in Sharjah along with over 50 people highlighted their struggle to get possession of their plots.

“We have regularly paid our instalments in the three-year promised time during 2008 to 2011 in dollars. The plot holders in Pakistan paid in rupees but the overseas residents were asked to pay in dollars and we did our part and waited for years to get possession of our promised plots but all went in vain. After waiting for years we started our struggle in 2017 to start gathering affected people through social media groups in the UAE, Saudi and USA,” he said.

The victims residing in the UAE have tried to approach different forums to raise their voices including the Pakistani mission in Abu Dhabi and Dubai while also trying to reach the higher authorities in Pakistan. They are still waiting for a solution to their grievances.

Highlighting their problems through the media, the affectees of the projects from the community are holding meetings in the UAE periodically to voice their woes but still nothing has happened.

Muhammad Khalil, residing in the UAE since 1996, has said that “we have with our hard-earned money invested in the DHA project which is considered to be a known name in the country’s housing sector and backed by a government institution. We collectively requested Prime Minister Imran Khan to resolve this issue and help the overseas community as many people have already passed away while waiting to get possession of their plots and now their widows are helpless,” he said.

He pointed that “we are Pakistanis and looters of the hard-earned money of overseas Pakistani should be brought to justice. These cases are not helping portray a positive image of our country among the other nations of the world.”

Recently, the overseas applicants of the project have been asked to pay $3,300 in the name of Service Government Charges (SGC).

“We have been asked to pay the new charges in dollars which is not only a large amount compared to local applicants in Pakistan but also illegal as we have already paid services charges with our regular instalments,” they said.

The group of affected people jointly appealed to Imran Khan, Chief Justice of Pakistan, Chief of Army, Ministry of Human Rights, Ministry of Overseas Pakistanis, Zulfi Bukhari, special assistant to PM on overseas Pakistanis to help them on the possession of their plots and take action against the management of the housing scheme recently demanding $3,300 as service government charges (SGC) which they say is totally illegal.

They also demanded that a comprehensive map of the location and the project be uploaded on its website which still lacks basic information.