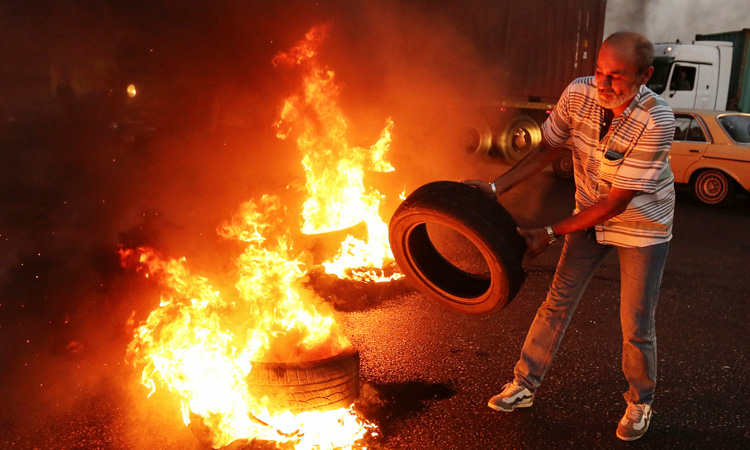 Lebanese army veterans burn tires during a protest over a state budget that includes a provision taxing their pensions, in Naameh, Beirut, on Thursday. Reuters/Aziz Taher

Lawmakers are debating the state budget in parliament this week after cabinet finalised it last month, a critical test of the government’s will to launch reforms it has put off for years and start tackling the nation’s huge debt burden.

The protests point to the landmine the government faces in trying to push spending cuts, even after Lebanon’s key parties agreed the budget in a bid to stave off financial crisis.

Fears of salary and pension cuts sparked protests and strikes in recent months, but the budget did not end up including cuts to the public sector wage bill.

The road was blocked for a few hours before the army arrived to partly open it up. Long lines of cars waited on either side of the main artery into the capital.

The veterans carried photos of killed army officers, whose families will also be affected by the new cuts.

“There will be closures in all of Lebanon ... The political class pushed us to this stage,” said Abbas Ammar, a first sergeant who retired in 2001. “All our lives we preserved the security of our country. These are our rights that we earned.”

The draft budget includes a 3% cut in their pensions to go to supporting health care and social services, a pension tax and a freeze on early retirement.

Lebanon has among the world’s heaviest public debt burdens at around 150% of gross domestic product (GDP). State finances are strained by a bloated public sector, high debt servicing costs and hefty subsidies on the power sector.

The main steps to cut the projected deficit to 7.6% GDP include a tax on interest, an import tax and the government’s plan to issue low-interest treasury bonds.