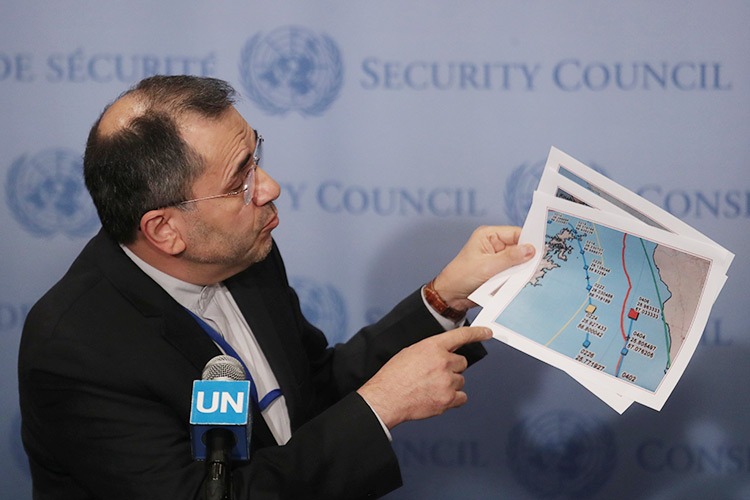 Iranian Ambassador to the United Nations Majid Takht-Ravanchi shows maps of airspace to the media outside Security Council chambers in New York. Reuters

US National Security Advisor John Bolton on Tuesday described as "deafening" Iran's apparent silence on an offer to negotiate with Washington.

"The president has held the door open to real negotiations," Bolton told journalists in Jerusalem.

"In response, Iran's silence has been deafening," he added.

Bolton is in Jerusalem for what Israel described as unprecedented talks with his Russian and Israeli counterparts, along with meeting Prime Minister Benjamin Netanyahu.

Speaking alongside the US advisor, Netanyahu said there was "a wider basis for cooperation between the three of us than many believe."

The measures against supreme leader Ayatollah Ali Khamenei and others have led to a "permanent closure of the path to diplomacy" according to Iran's foreign ministry.

Tensions are running high after Iran shot down a US spy drone last week and Trump considered, then cancelled, a retaliatory strike.

Bolton said Tehran has carried out "attacks upon American personnel and assets in the Middle East" and accused the Islamic republic of seeking nuclear weapons.

Tehran denies it is seeking nuclear weapons and says its programme is for civilian use only.

But more than a year after Washington pulled out of a landmark deal between Tehran and world powers, which sought to limit Iran's nuclear activities, Bolton said the US remains open to negotiations.

"All that Iran needs to do is to walk though that open door," he said.

Iran's president said Washington's decision to impose sanctions on its top diplomat and other senior officials proved the US was "lying" about talks.

"At the same time as you call for negotiations you seek to sanction the foreign minister? It's obvious that you're lying," President Hassan Rouhani said in a meeting with ministers broadcast live on TV.