Trump, Salman discuss Saudi role in tackling threat to ME 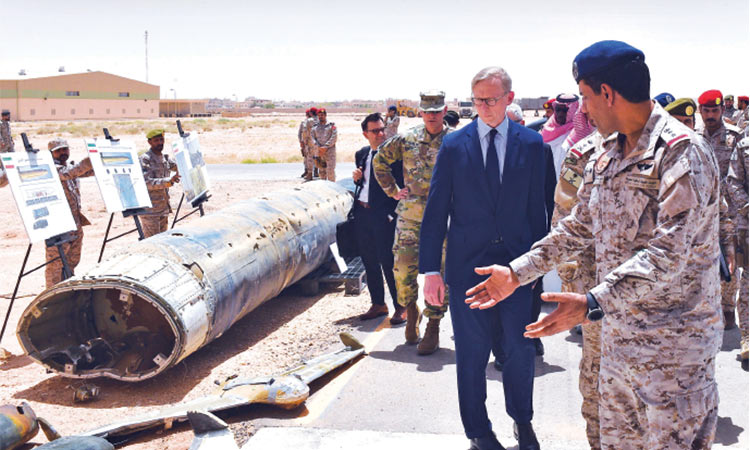 President Donald Trump said on Friday that the US was “cocked and loaded” to retaliate against Iran for downing an American drone, but he cancelled the missile strikes 10 minutes before they were to be executed after being told some 150 people could die.

Trump tweeted that the US will never allow Iran to have a nuclear weapon, a major longtime demand by the US and its allies. But he said he’s in no hurry to respond militarily to this week’s downing of the huge US surveillance drone over the Strait of Hormuz. His statement was the latest indication that he does not want to escalate the clash with Tehran, but he didn’t rule out a future US strike.

“The two leaders discussed Saudi Arabia’s critical role in ensuring stability in the Middle East and in the global oil market. They also discussed the threat posed by the Iranian regime’s escalatory behaviour,” a White House statement said.

Earlier, US envoy on Iran Brian Hook said in a news conference in Riyadh that US diplomacy did not give Iran the right to respond with military force. Hook said Iran must meet US diplomacy with diplomacy.

Meanwhile, Emirates Airline said that in light of the current situation, Emirates has taken precautionary measures including rerouting all flights away from areas of possible conflict.

Emirates Spokesman said in a statement: “We are carefully monitoring the ongoing developments and are in close contact with the relevant government authorities with regards to our flight operations, and will make further operational changes if the need arises.”

The re-routings have minimally affected the arrival/departure timings of some flights, and we urge customers to check the latest schedules on emirates.com , so they can be informed of any flight changes. As always, the safety of our passengers, crew and aircraft is our number one priority and will not be compromised, he concluded.

The US Federal Aviation Administration (FAA) issued an emergency order on Thursday prohibiting US air carriers from flying in Iran-controlled airspace over the Strait of Hormuz and Gulf of Oman due to heightened tensions.

Some of the world’s leading carriers including British Airways, Qantas and Singapore Airlines suspended flights over the Strait of Hormuz, as Iran-US tensions flare over the downing of a drone.

The suspensions will affect many thousands of passengers and came after the Federal Aviation Administration in the United States issued a Notice to Airmen (NOTAM), “prohibiting US-registered aircraft from operating over the Strait of Hormuz and Gulf of Oman.”

The NOTAM was in response to “heightened military activities and increased political tensions that might place commercial flights at risk,” an FAA statement said, as Tehran and Washington engaged in a war of words over Thursday’s missile strike on the drone.

The FAA’s notice applies only to US-registered airlines, and United Airlines said it was suspending its Newark-Mumbai service in response. But European and Asian operators were taking no chances.

“Our safety and security team are constantly liaising with authorities — including the likes of the FAA — around the world as part of their comprehensive risk assessment into every route we operate,” a BA spokeswoman said.

Responding to the latest tensions over Iran, Malaysia Airlines said it “is closely monitoring the situation and is guided by various assessments including security reports and NOTAMs by respective airspace control authorities.”

Australia’s flag carrier Qantas said it too was avoiding the Strait of Hormuz and Gulf of Oman “until further notice,” while Singapore Airlines warned passengers that its flight times to Europe would likely take longer now.