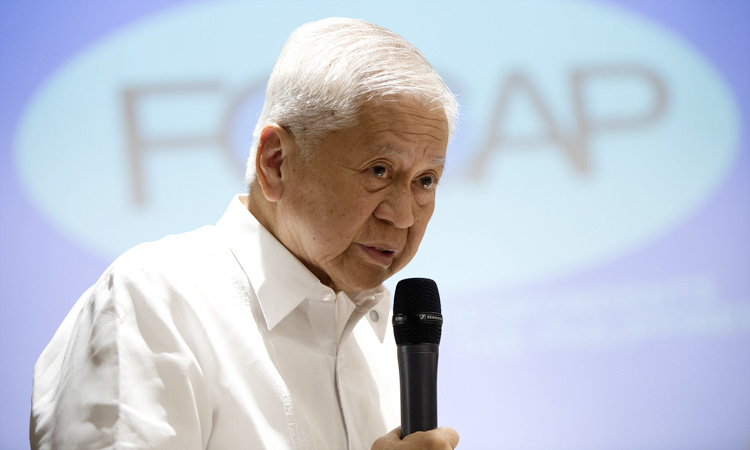 Del Rosario was behind two prominent initiatives against China, including a 2013 case at an international arbitral tribunal which eventually ruled against Beijing’s claim over most of the resource-rich waterway.

His deportation comes as anger is still bubbling in Hong Kong over a proposed bill that would have allowed extraditions to the mainland, raising fears of people being ensnared in China’s opaque court system.

Del Rosario said he flew to Hong Kong early Friday using a Philippine diplomatic passport but was taken to an immigration holding area on arrival, where he remained “for nearly three and a half hours.”

She said he was already aboard a plane back to the Philippines and added that authorities had given no reason for denying him entry.

Hong Kong immigration officials had no immediate statement on the deportation but routinely decline to comment on individual cases.

Although Hong Kong was returned from British to Chinese rule in 1997, it is still administered separately under an arrangement known as “One country, two systems.”

But activists have been alarmed in recent years by what they feel is a tighter grip by Beijing, though Hong Kong still retains freedoms unseen on the mainland.

Earlier del Rosario had told local Manila television network ABS-CBN that he was given “no rational explanation” for his detention.

In March, del Rosario filed a complaint against Chinese leader Xi Jinping at the International Criminal Court, alleging “crimes against humanity” over the supposed environmental fallout of Beijing’s activities in the disputed waters.

Hong Kong immigration authorities briefly held another Philippine critic of China, former Supreme Court justice and special anti-graft prosecutor Conchita Carpio Morales on May 21 when she made a private visit to the territory with her family.

Morales, who was also a party in the complaint filed by del Rosario at the ICC, was released hours later, but chose to return to Manila instead.

Del Rosario said he had been in Hong Kong to attend a board and shareholders’ meeting of a private company, and had asked the Philippine foreign department to inform the territory’s authorities about his trip.

Friday’s incident comes as the Duterte government seeks to calm public outrage over the June 9 sinking of a Filipino fishing boat by a Chinese vessel in an area of the South China Sea claimed by both countries.

Duterte has called the incident “just a collision of boats” and reiterated his country does not want war with China.

A Chinese foreign ministry spokesman called for a joint investigation of the sinking on Thursday, but Philippine Foreign Secretary Teodoro Locsin rejected the suggestion.

“There will be NO joint investigation. China and the Philippines will conduct their respective investigations,” he said in a tweet.