Modi and mutts on mats for International Yoga Day - GulfToday

Modi and mutts on mats for International Yoga Day 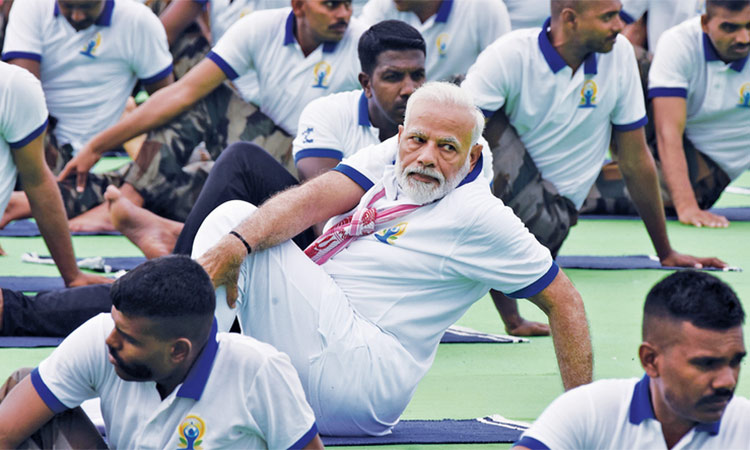 Indian Prime Minister Narendra Modi and some well-poised pooches led the way on Friday for International Yoga Day, this year with the theme of stopping climate change.

Yoga Day, observed mostly in India but also worldwide on the Northern Hemisphere’s longest day, was Modi’s idea. It was adopted unanimously by the UN General Assembly in 2014 and first took place in 2015.

Modi performed sun salutations and other flexible feats in a mass early-morning session with an estimated 30,000 other devotees that was live-streamed on the media-savvy premier’s Twitter feed to his 48 million followers.

Elsewhere in India, armed forces personnel laid out their yoga mats on the deck of the aircraft carrier INS Viraat anchored in Mumbai while at India Gate, a Delhi landmark, Defence Minister Rajnath Singh led the way.

In Haryana the Indo Tibetan Border Police stretched out atop their nonplussed-looking horses and lying on the ground with their dogs who valiantly put their best paw forward, as did the pooches of the Border Security Forces and the Army Dog Unit, tongues hanging out.

Foreign consulates in Delhi also got in the act with staff at the French embassy in the red, white and blue of the national flag. Germany’s new poney-tailed envoy and staff did their asanas a day early around his shiny red Ambassador car he calls “Auntie Amby”.

Members of India’s National Cadet Corps (NCC) took part in a mass yoga session at the Bison Polo Grounds in Hyderabad while roughly 70,000 people took over the race course in Mysore in the south.

Modi this year took to business networking website LinkedIn to extol yoga as a “panacea” for stress and even hate.

“In a world where ideologies of hate can potentially divide brother from brother, Yoga stands as a unifying force,” Modi wrote.

“In a time where health ailments, especially stress-related ailments are rising, Yoga is giving relief and joy.” The theme of this yoga day, the fifth, is “climate action” and Modi said yoga can “foster oneness... with all the flora and fauna with whom we share our beautiful planet”.

In recent days Modi, 68, fresh from a landslide election victory, has also posted videos to social media featuring an animated version of himself performing different yoga postures.  Yoga is an ancient physical, mental and spiritual practice originating in India. The word derives from Sanskrit and means to join or to unite, symbolising the union of body and consciousness, the UN’s official Yoga Day webpage says.

It has boomed in recent decades, with millions - perhaps up to 300 million - practising it regularly, although in the West it is often more of a physical than a spiritual activity.

Among the more unusual forms that have sprung up are “hoga” (yoga on a horse), “noga” (nude yoga), “doga” (yoga with a dog) -- and Harry Potter yoga complete with a “Downward Dumbledore”.

“New India,” Gandhi tweeted in a mocking vein, attaching two photographs of army personnel performing Yoga along with the dog squad on the occasion of International Day of Yoga.

Gandhi had lost the Lok Sabha election from his family pocket borough of Amethi against Union Minister and BJP leader Smriti Irani.

Urging people to make yoga an integral part of their lives, Prime Minister Narendra Modi on Friday said that it hadn’t reached the poor people and tribal belts of the country as much as it should have. He also gave the motto “yoga for peace, harmony and progress”.

Modi performed yoga, along with around 30,000 people, at Prabhat Tara grounds here on the occasion of the fifth International Yoga Day.

Addressing the participants, Modi said: “Modern yoga has not reached the poor and tribal people. We have to make yoga an integral part of their lives. Poor people suffer more from diseases and it makes them poorer... Yoga is a medium to come out from poverty.”

He said in the changing world, “we have to take preventive measures for illness and focus on wellness”.

“Yoga is discipline. Yoga is beyond age, rich, poor, caste, religion, region and boundaries. ‘yoga sabka hai aur sab yoga ke hain’ (yoga is of everyone, everyone is of yoga),” he said.

Demand surged after the Federal Reserve on Wednesday indicated it would likely cut interest rates soon — for the first time in a decade — which sent the dollar tumbling across the board and making it cheaper to buy the yellow metal.