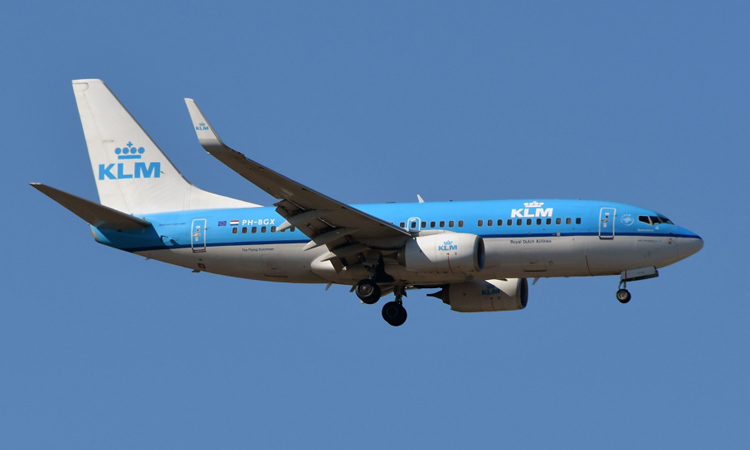 A Boeing 737 Next Gen of KLM flies above Toulouse, southern France. File / AFP

Airlines including British Airways, Qantas and KLM said on Friday they were suspending flights over the Strait of Hormuz in line with a ban by US authorities, after Iran shot down a US drone.

The suspensions came after the Federal Aviation Administration in the United States issued a Notice to Airmen (NOTAM) "prohibiting US-registered aircraft from operating over the Arabian Gulf and Gulf of Oman."

The NOTAM was in response to "heightened military activities and increased political tensions that might place commercial flights at risk", an FAA statement said.

While the FAA's notice applies only to US-registered planes, European companies and Malaysia Airlines followed suit.

"Our safety and security team are constantly liaising with authorities — including the likes of the FAA — around the world as part of their comprehensive risk assessment into every route we operate," a BA spokeswoman said.

In a statement, Dutch carrier KLM said: "Safety is the top priority for KLM.

"The incident with the drone is reason not to fly over the Strait of Hormuz for the time being. This is a precautionary measure."

Iran's downing of the drone — which Washington insists was above international waters but Iran says was within its airspace —has seen tensions between the two countries spike further after a series of attacks on tanker ships blamed by the US on Tehran.

The Netherlands is still reeling from the downing of Malaysia Airlines flight MH17 in 2014, which was hit a missile over eastern Ukraine's Donetsk region where pro-Russian separatist rebels are battling Ukraine forces.

International investigators on Wednesday charged three Russians and a Ukrainian with murder over the shooting down of the plane, which was travelling between Amsterdam and Kuala Lumpur.

The incident forced airlines on the busy Europe-Asia route to divert flights away from Ukraine airspace.

Responding to the latest tensions over Iran, Malaysia Airlines said it "is closely monitoring the situation and is guided by various assessments including security reports and NOTAMs by respective airspace control authorities."

"We're adjusting our flight paths over the Middle East to avoid the Strait of Hormuz and Gulf of Oman until further notice," the company said in a statement.