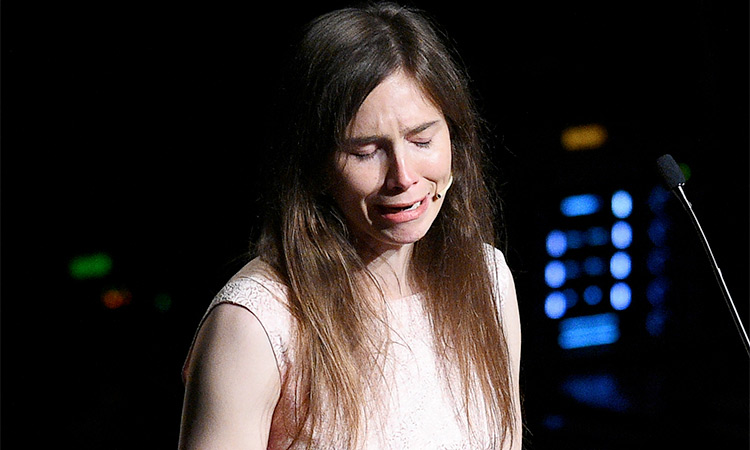 Amanda Knox cries as she speaks at the Criminal Justice Festival in Modena, Italy, on Saturday. Reuters

Amanda Knox told an Italian legal forum on Saturday she feared “harassment” and “new accusations” four years after she was acquitted of the gruesome killing of her British housemate.

Knox, from Seattle, spent four years behind bars after the half-naked body of fellow exchange student Meredith Kercher was found on Nov.2, 2007 in a bedroom of the apartment they shared in the central Italian city of Perugia.

Now, the 31-year-old is controversially back in Italy for a discussion panel entitled “Trial by Media” at the Criminal Justice Festival in the northern city of Modena.

“I have come back because it was something I had to do — there was a time when I felt at home in this beautiful country and I hope one day to recapture this feeling,” Knox, speaking in Italian, told the forum, her voice often close to breaking.

“I know that, despite my acquittal, I remain a controversial figure in the face of public opinion, especially here in Italy. I know many people think I am wicked,” said the American.

“Some have even suggested that by being here I am once again traumatising the Kercher family and profaning Meredith’s memory,” she went on.

“They are wrong,” she insisted.

“The fact I continue to be held responsible for the Kerchers’ pain shows how powerful false narratives can be and how they can undermine justice, especially when reinforced and amplified by the media,” said Knox.

The conference has been organised by a group of Modena lawyers and the Italy Innocence Project, which focuses “on the issues related to wrongful convictions and miscarriages of justice.”

“The Italy Innocence Project didn’t yet exist when I was wrongly convicted in Perugia,” Knox tweeted in May.

From the outset, her case sparked lurid headlines in Britain and Knox’s hometown of Seattle, Washington.

Sollecito was acquitted alongside Knox, but Guede was convicted in a separate “fast track” trial and is serving a 16-year jail term in Italy.