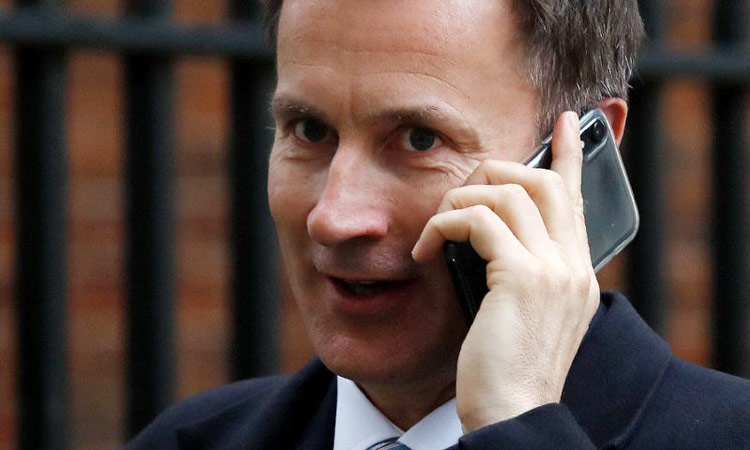 British Foreign Secretary Jeremy Hunt, a contender to replace Theresa May as prime minister, said on Sunday that German Chancellor Angela Merkel had indicated the EU was willing to renegotiate the Brexit divorce deal.

Hunt, one of nearly a dozen Conservatives vying to succeed May after she resigned as party leader on Friday, said he spoke with Merkel at this week’s D-Day commemorations and was convinced changing May’s agreement was possible.

“She said that of course with a new British prime minister we would want to look at any solutions you have,” he told Sky News.

“I’m absolutely clear that if we take the right approach to this, the Europeans would be willing to negotiate on the package.” Hunt did not specify if he was referring to the legally-binding withdrawal agreement which the EU has repeatedly insisted cannot be re-opened, or to the accompanying political declaration on future relations.

Hunt claimed Merkel had signalled EU leaders may now be open to a technological solution to the thorny issue -- something Brussels has previously ruled out as unrealistic.

“She said to me Germany doesn’t have that border with the Republic of Ireland, you do so you need to come up with the solution,” he said of their conversation.

“So it’s going to be a solution that’s based around some technologies -- what the Germans call intelligent border(s). I think that’s doable.” The Brexit-dominated battle is expected to conclude by the end of next month, with former foreign secretary Boris Johnson considered the clear frontrunner.

Johnson said in an interview published on Sunday that he would refuse to pay Britain’s £39 billion divorce bill until the EU agrees better withdrawal terms.

The ex-London mayor also signalled he would scrap the much-despised backstop and try to settle the border issue once London and Brussels were negotiating their future relationship.

“Our friends and partners need to understand that the money is going to be retained until such time as we have greater clarity about the way forward,” he told The Sunday Times.

“In getting a good deal, money is a great solvent and a great lubricant,” Johnson added, in his first newspaper interview since launching his bid to become Britain’s next premier.

Johnson also argued that only he could defeat leftist Labour leader Jeremy Corbyn and anti-EU populist Nigel Farage, whose new Brexit Party has been poaching Tory voters disgruntled at their party’s handling of Brexit.

Michael Gove, another candidate to replace May, said he would be prepared to delay Brexit for a few days or weeks beyond the current exit date, if Britain was close to signing an exit deal with the European Union.

“If we’re 95 per cent of the way there on Oct.31, would it really make sense to junk that progress and to say ‘tell you what, we’re leaving without a deal anyway’?” he told the BBC.

Sajid Javid, another candidate to be Britain’s next prime minister, said on Sunday he would offer to cover the cost of finding a post-Brexit border solution with Ireland - something he said would unlock fresh negotiations with the EU.

“The key is Ireland,” he told Sky News. “I would offer to pay for the new alternative arrangements on the border, it would be in the hundreds of million. I would propose to do that because economically it’s right and morally it’s right.” Javid also said he would slow the pace of Britain’s national debt reduction to free up cash that would be used to invest in education.

Brussels has said the declaration could be revisited if Britain makes a substantive change in its positions, for example on a customs union or access to the single market.

May agreed the package with the EU last year but saw it rejected three times by British lawmakers, forcing her to delay Brexit twice.

A controversial provision in the agreement for the Irish border, known as the backstop, has proved the key stumbling block.

It would prevent the return of border checks between the British province of Northern Ireland and the Republic of Ireland if the sides fail to agree a free trade pact after an initial transition period.

May stepped down as Conservative Party leader on Friday and formally triggered the race for a successor -- currently being contested by 11 Tory MPs -- but will remain prime minister until a new leader is chosen.