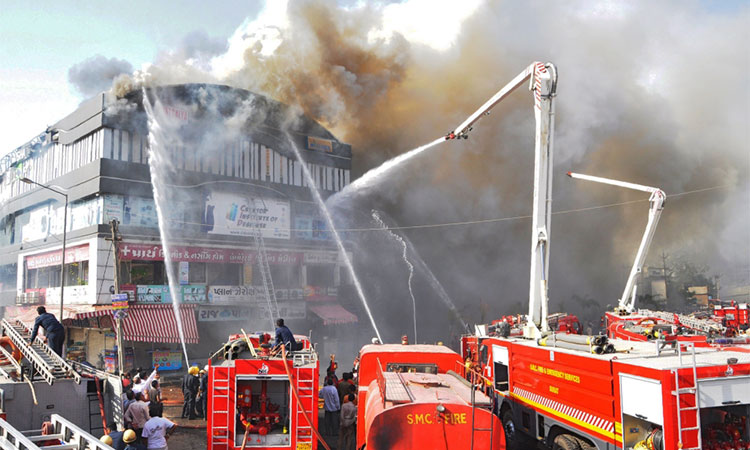 Firefighters try to control a major fire in a building housing a college in Surat on Friday. AFP

At least 20 students — most of them female — died on Friday in a fire at an Indian building housing a college, officials said, as images showed people jumping to escape the blaze.

A video of the fire appeared on social media showing a man on the ledge trying to help students escape the building. Gulf Today could not independently confirm the identity of the man. Media reports suggested that the man saved the lives of two students.

Heaps of praise poured in for the man. One Twitter user said, “Salute to the man who saved 2 precious lives…”

"The students lost their life both because of the fire and jumping out of the building," Deepak Sapthaley, a fire official in the western city of Surat, told AFP.

Images showed blazing orange flames and black smoke billowing out of the building.

Sapthaley added that when the blaze began 50 or 60 people were inside the coaching institute on the top floor of the building, which is several storeys high.

The cause was not yet known. 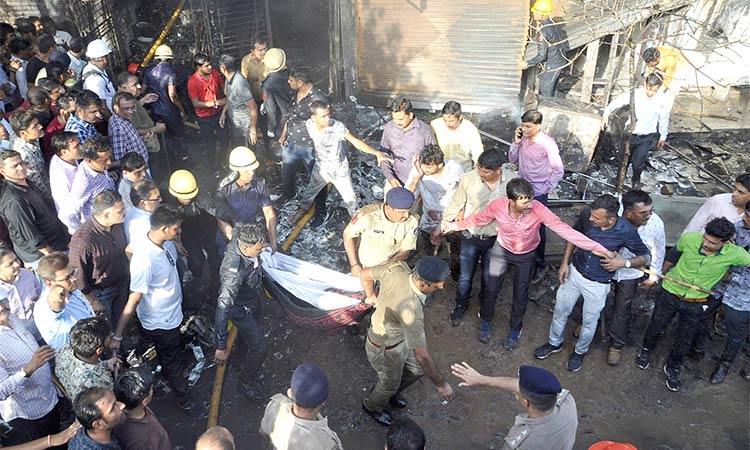 Firefighters, police personnel remove a body from a building housing a college that caught fire in Surat on Friday. AFP

"The toll has jumped to 19 and includes 16 females. Sixteen persons died because of burns and three others from injuries after they jumped," Jayesh M Patel, medical officer at Surat Municipal Institute of Medical Education and Research, told AFP.

Officials had initially given a toll of at least 15 dead.

Prime Minister Narendra Modi, who comes from Gujarat state where the fire broke out, said on Twitter: "Extremely anguished by the fire tragedy in Surat.

"My thoughts are with bereaved families. May the injured recover quickly. Have asked the Gujarat Government and local authorities to provide all possible assistance to those affected."

Local officials said that the fire spread quickly because of the material used in the roof.

It started on Friday afternoon when classes were packed, mostly with teenagers.

Local media reports said the toll could still rise as many students were undergoing treatment at local hospitals.