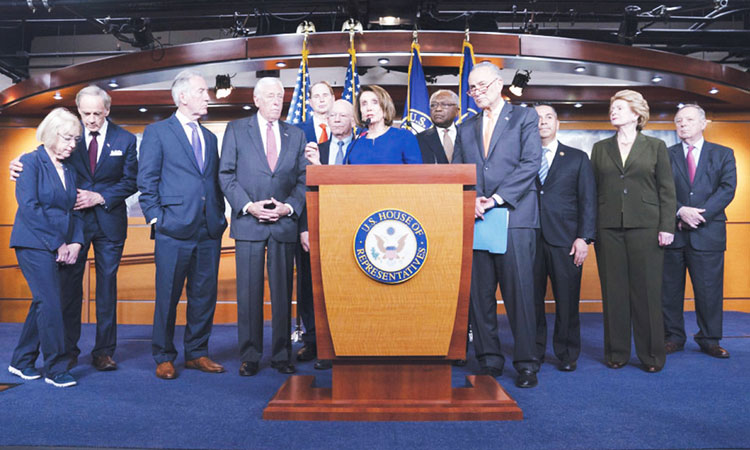 Nancy Pelosi and other congressional leaders react to a failed meeting with Donald Trump at the White House on Wednesday. Associated Press

Donald Trump erupted in fury on Wednesday at unrelenting probes into his links to Russia, as the top Democrat in Congress accused the president of a “cover-up” that could be an impeachable offence.

A livid Trump abruptly shut down a White House meeting with Democratic leaders Nancy Pelosi and Chuck Schumer, announcing he could not deal with them on policy until “phony investigations” are brought to a close.

The clash marked a dramatic escalation in Trump’s war of words with congressional opponents seeking to bring him to account for what they say is presidential wrongdoing.

Trump’s ire was seemingly triggered by House Speaker Pelosi, his nemesis in Congress, who declared following an emergency meeting with lawmakers earlier Wednesday: “We believe that the president of the United States is engaged in a cover-up.”

“I don’t do cover-ups,” Trump shot back at a hastily arranged Rose Garden press event moments after the aborted White House talks.

“So get these phony investigations over with,” Trump said − warning a failure to do so would spell gridlock on issues like fixing the country’s infrastructure, on which the two sides had hoped for a breakthrough Wednesday.

“You can’t investigate and legislate simultaneously,” he added. “It just doesn’t work that way.” A two-year investigation by special counsel Robert Mueller into Russia’s interference in the 2016 US election concluded there was no hard evidence Trump’s campaign colluded with Moscow.

But the prosecutor said he could not rule clearly on whether Trump obstructed justice, leaving it to the Trump-appointed attorney general, Bill Barr, to declare there was no obstruction.

The Democrats’ decision to pursue the grey areas of the investigation − and their open discussion of whether to pursue the politically perilous process of impeachment − has enraged Trump.

“PRESIDENTIAL HARASSMENT!” he tweeted on Wednesday, as he stepped up his attacks on the probes.

Any pretense of cooperation on policy evaporated as Trump and Pelosi locked horns, with the impeachment issue inching toward centre stage in Washington.

Trump was visibly angry when he arrived at the meeting with Pelosi and Schumer, according to people familiar with what transpired.

The president did not shake hands or sit down, and accused Pelosi of saying something “terrible.” Republican leaders sought to pin the blame on Democrats.

“Their obsession with impeaching this president is paralysing any progress we could be making,” House Minority Leader Kevin McCarthy said on Twitter.

Speaking after she left the White House, Pelosi doubled down, charging that Trump could have committed an impeachable offense by publicly refusing to comply with congressional subpoenas connected to Mueller’s probe.

She likened it to the “cover-up” that brought down former president Richard Nixon in the Watergate crisis.

“The fact is, in plain sight, in the public domain, this president is obstructing justice and he’s engaged in a cover-up,” she told a Washington conference. “And that could be an impeachable offense.”

In a letter to the Democratic Caucus Pelosi wrote that Trump threw a “temper tantrum” − something the president denied.

“This is not true,” Trump tweeted late Wednesday. “I was purposely very polite and calm, much as I was minutes later with the press in the Rose Garden.” He then wrote that House Democrats only want “put the Mueller Report behind them and start all over again. No Do-Overs!”

Pelosi’s remarks appeared to reflect the growing anger by Democrats at White House stonewalling, even as she has worked hard to tamp down talk of impeachment.

A day earlier, Democrats were left seething when Trump’s former lawyer Don McGahn, a key figure in the Mueller report, refused to testify about obstruction allegations against the president.

Democrats also argue that Barr is subverting congressional oversight powers in order to protect the president.

But on Wednesday, the House Intelligence Committee’s chairman said the Justice Department had agreed to begin honoring a subpoena for material related to Mueller’s probe.