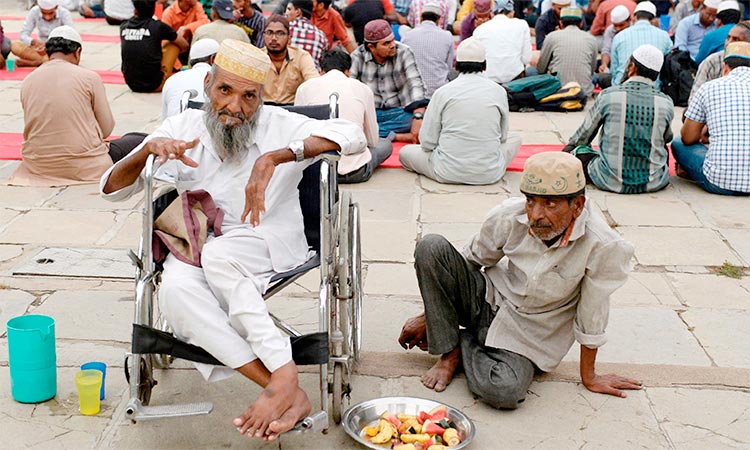 Muslim devotees break their fast on the first day of the Ramadan at the Jama-e-Masjid Aiwan in Hyderabad. Agence France-Presse

The Bharatiya Janata Party has developed a fear of losing, political pundits in the national capital say. They offer two examples: One, BJP national secretary Ram Madhav and close ally Shiv Sena’s high-profile MP: Sanjay Raut have admitted that the party may not gain an absoloute majority in the Lok Sabha. Secondly, the attacks by Prime Minister Narendra Modi and other leaders on the opposition get more and more vicious every day, betraying a loss of confidence.

Ram Madhav said last week that the BJP will require the support of allies to form the next government after the Lok Sabha polls. “If we get 271 seats on our own, we will be very happy,” Madhav said. “With NDA we will have a comfortable majority,” he added.

Ram Madhav is known as a man with solid connections to the Rashtreeya Swayamsevak Sangh (RSS), the political mentor of the BJP. A statement coming from his has several implications and reflects a thinking in the organisation. In one sense it is also a censure of the BJP leadership. That is why BJP chief Amit Shah on Tuesday asserted that the party will leap past 282 seats.

Raut echoed Madhav’s view on Tuesday, and promised that the Shiv Sena would ensure that Modi becomes prime minister again.

“What Ram Madhav says is right. The NDA will form the next government.

The BJP will be the single largest party. As of now it looks a bit difficult for the BJP to reach the 280-282 figure on its own but our NDA “parivar” (family) will cross the majority mark,” Raut told a TV channel.

“I welcome Ram Madhav’s statement and the Shiv Sena would be a part of the National Democratic Alliance (NDA). We would be happy if Modi becomes the prime minister again.” It is known that the BJP has promised the Sena to concede Maharashtra to it after the elections. That’s the price for the alliance and the Sena doesn’t long for anything more.

The BJP attacks on the opposition crossed all limits of decency when Modi on Saturday called matryred prime minister Rajeev Gandhi “brastachari number 1,” meaning most corrupt. Facts remain on the table to prove that Rajeev had obtained a clean bill from the Delhi High Court in the Bofors case which Modi is referring to.

Observers say Modi is not a stranger to civility, but seems to have lost his balance possibly out of a growing fear of loss. He knows it is uncivil to attack a martyred prime minister in such terms, but he keeps pressing his argument and has even gone to the extent of challenging the Congress to face the election on the issue of Rajeev’s corruption.

Amit Shah and other BJP leaders also are pressing on with the issue.

What about all the tall claims that the BJP had made about its performance in the last five years? The fact is that the electorate is not responsing positively to the BJP campaign. The seething anger in the farming belts is no more a secret. The horrors that the common man suffered after the demonetisation, the squeezing of the traders after enforcing the GST, the hate campaings that ripped apart peaceful communities — all have brought a lot of negativity.

The RSS feels it because it has connections to the common man, and are able to receive the kind of feedback that people in power cannot manage. That is the significance of the statements made by Madhav and Raut. If Modi has resorted to a more vicious campaign since last week, it should be due to pressure from the RSS, which wants a sharpened campaign.

A delegation of opposition parties on Tuesday visited the election Commission (EC) and urged it to look into their demand for 50 per cent auto check of VVPAT.

After meeting the EC, Singhvi said that nowhere the Supreme Court has said that the EC cannot increase the auto check of VVPAT from five per cent.

“Only our review plea for extending the auto check of VVPAT was rejected by the apex court,” Singhvi said.

Earlier in the day, the SC dismissed the opposition plea to review order on VVPAT.

Satisfied with the meeting, Singhvi said the EC assured that they would look into how VVPAT can be made a bigger confidence building measure.