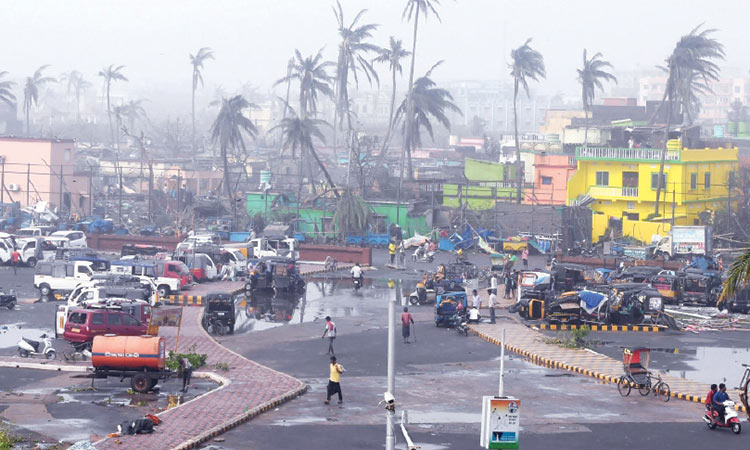 People gather next to storm-damaged buildings and palm trees in Puri on Saturday. Agence France-Presse

Cyclone Fani, one of the strongest storms to batter the Indian subcontinent in decades, uprooted trees and triggered rains as it entered West Bengal post midnight on Saturday, hours after making landfall and causing havoc in Odisha on Friday.

No loss of life or any injury has been reported so far.

According to the Meteorological department, the extremely severe cyclonic storm relatively weakened after entering coastal Odisha and transformed into “very severe” as it approached Bengal.

The storm is now lying close to Arambagh in Hooghly district, and is 40 km west of Kolkata.

“It is likely to continue further in north, north east direction, and reach the east Burdwan-Hooghly border, and through Nadia go to Bangladesh on Saturday afternoon, weakening into a cyclonic storm, after having triggered rains,” Bandyopadhyay said.

Fani lashed cities and towns in coastal Bengal including Digha, Mandarmani, Tajpur, Sandehskhali and Contai while the effects of the storm could also be felt in cities like Kharagpur and Burdwan as trees were uprooted and metal hoardings gave way.

Parts of Kolkata and the suburbs also received moderate to heavy rainfall since Friday afternoon. The epicentre of the storm is expected to hit the city in the early hours on Saturday.

The rains would continue till early Saturday.

In the sea resort of Digha, the win speed reached 70 kmph in some areas, in Frazerganj the wind velocity was between 60 and 70 kmph.

Kharagpur has so far recorded 95 mm rainfall, which will continue for the next two to three hours.

“The rains will continue till early morning on Saturday, and the weather will start improving by evening,” he said.

The administration has switched off electricity to prevent any accident as the storm passed through a particular point in the state.

Odisha Chief Minister Naveen Ptanaik on Saturday said “a record 1.2 million people were evacuated in 24 hours” claiming to have carried out the “biggest human evacuation in history.”

He hailed each and every one of the 4.5 crore people involved in the entire process − the evacuees and rescuers − as he appreciated volunteers and officials working round the clock to pull off the feat.

Cyclone Fani was one of the rarest summer cyclones, the Chief Minister said in a press release adding that it was the first one in 43 years to hit Odisha and one of the three to hit in the last 150 years.

“Because of this rarity, tracking and prediction were challenging. Till 24 hours of landfall of the cyclone − one was not sure about the trajectory it was going to take,” Patnaik said.

“However, we prepared ourselves to face all the possible eventualities. This led to one of the biggest human evacuations in history - a record 1.2 million people were evacuated in 24 hours. 3.2 lakh from Ganjam and 1.3 lakh people from Puri.”

“I would like to thank all the volunteers, PRI members, officials, and staff who have worked tirelessly and selflessly to get around 1.2 million people to safety.

“Instead of it being a tragedy of humongous proportions, we are in the process of restoring critical infrastructure. I thank the 4.5 crore people who have made this possible,” Patnaik said.

‘Fani’ made a landfall in Puri with a wind speed of more than 200 kmph and gusting speed of 240 kmph. It tore apart critical infrastructure, especially power, telecom and water supply.

“Lakhs of trees were uprooted, blocking roads, breaking homes and damaging public infrastructure. In Puri district and parts of Khurda, electricity infrastructure has been totally devastated and we have the challenge of having to set up the entire electrification afresh,” Patnaik said.

Preliminary reports suggest kuccha houses have been completely destroyed in Puri, parts of Khurda and other districts.

After all flights from Bhubaneswar and Kolkata airports were grounded on Friday, the NSC Bose airport here resumed operations at 9.57 a.m. on Saturday. 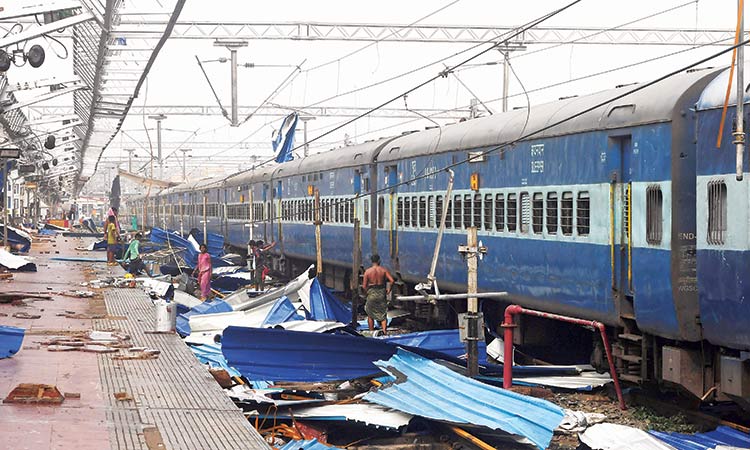