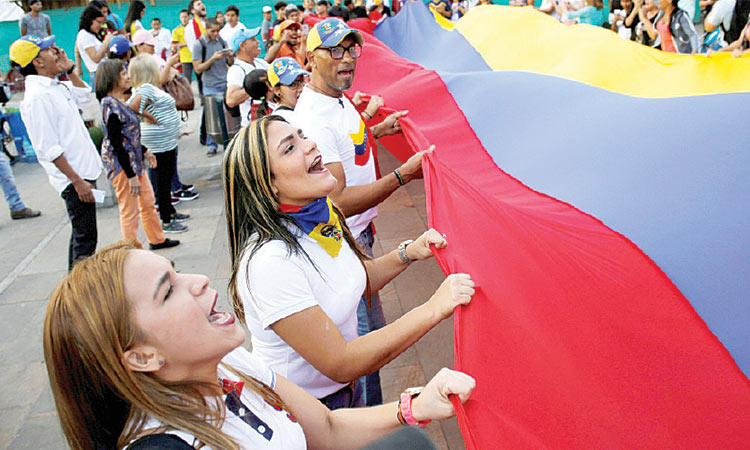 “Yes, we are in combat, keep morale high in this fight to disarm any traitor, any coup plotter,” Maduro said at a televised event with the military high command in which he appeared surrounded by soldiers.

Guaido’s call to take to the streets on Wednesday in a bid to force President Nicolas Maduro from power, but there was little concrete sign of change in a crisis that increasingly looks like a political stalemate.

Guaido had called for the “largest march” in Venezuela’s history and said on Twitter that “millions of Venezuelans” were in the streets in “this final phase” of his move to oust Maduro.

The standoff in the South American country increased tensions between the United States and Russia, which accused each other of interference in the OPEC-member nation’s affairs.

Despite Guaido’s calls for the military to support him, the armed forces leadership has so far remained loyal to Maduro, who has been in power since his mentor, the late President Hugo Chavez, died in 2013.

“If the regime thought we had reached maximum pressure, they cannot even imagine,” Guaido told thousands of cheering supporters. “We have to remain in the streets.” It was unclear what more Guaido can do at this point. The Venezuelan opposition has often staged huge street protests against Maduro but failed to dislodge him despite a deep economic recession and hyperinflation.

“We need to keep going,” said Laila Amezquita, a 52-year-old nurse from Caracas’ downtown Candelaria district. “In three months, Guaido’s been able to do what they have not done in 20 years, and one has to be patient.”

Others are frustrated that nothing has changed more than three months after Guaido, head of the opposition-run National Assembly, invoked the constitution to assume an interim presidency, arguing that Maduro’s 2018 re-election was illegitimate.

Guaido is recognised as Venezuela’s legitimate head of state by the United States, the European Union and others, while Maduro is backed by countries including Russia, China and Cuba.

US President Donald Trump’s administration has imposed sanctions on the Maduro government and refused to rule out military intervention, although it says it prefers a peaceful transition.

“Military action is possible. If that’s what’s required, that’s what the United States will do,” US Secretary of State Mike Pompeo told Fox Business Network.

In turn, the United States has accused Moscow of interfering in Venezuela, an ally of Russia since the time of Chavez.

Pompeo said Maduro had been expected to flee the country on Tuesday but Russia convinced him to stay, which the Kremlin has denied.

“This is our hemisphere,” he told reporters outside the White House. “It’s not where the Russians ought to be interfering. This is a mistake on their part. It’s not going to lead to an improvement of relations.” China called for a political settlement via dialogue.

“We hope parties in Venezuela will proceed from the interests of the country and people, avoid bloody conflicts and restore the country’s stable development momentum as soon as possible,” the foreign ministry said in a statement on Thursday.