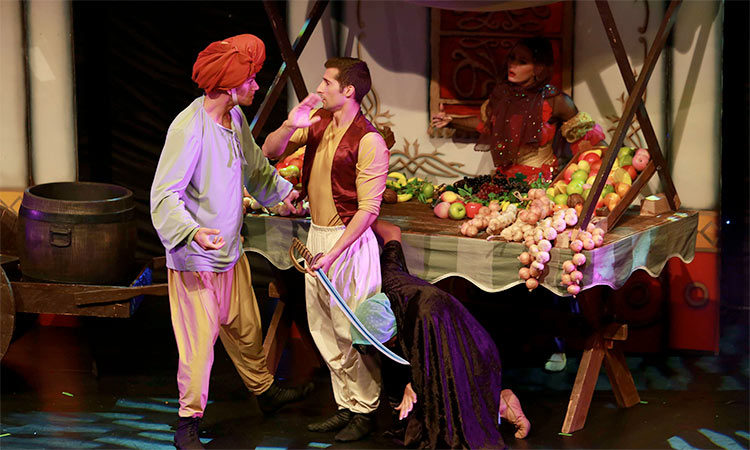 Packed with impeccable narration and soulful music, the stage performance of famed Arabian fable Aladdin swept the theatre lovers off their feet as it took them to a magical journey of adventure, with flying carpets and the legend of the genie.

The sixth performance of the World of Stories series, being organised at Masrah Al Qasba - Theatre, saw the characters from the famous folktale come to life, as audience at the jam-packed venue explored various aspects of the story of a kind-hearted street urchin named Aladdin and the power-hungry wicked sorcerer, who lures him into rubbing the magic lamp that is capable of granting any wish.

The story takes an interesting turn as Aladdin discovers a wish-granting genie on rubbing the lamp, only to realise later that there is no easy way to get what you want. He learns some valuable life lessons as the story flows along.

The spectacular performance brought a flavour of traditional Arabic storytelling to the fore, and also proved an effective tool of instilling the values of integrity and honesty in children and young audience who enjoyed the performance.

The very gist of the story was exemplified with the powerful acting skills of the artists on stage, and it sent out a strong message that there are no shortcuts to success.

The World of Stories series features 13 theatre shows that are aimed at educating children about the history of classic fairy tales and music. The performances motivate children to enhance their self-confidence and communicate with love and peace.

Al Qasba offers state-of-the-art facilities, premium services, and hosts world-class events, which attract a huge turnout of tourists and visitors throughout the year.