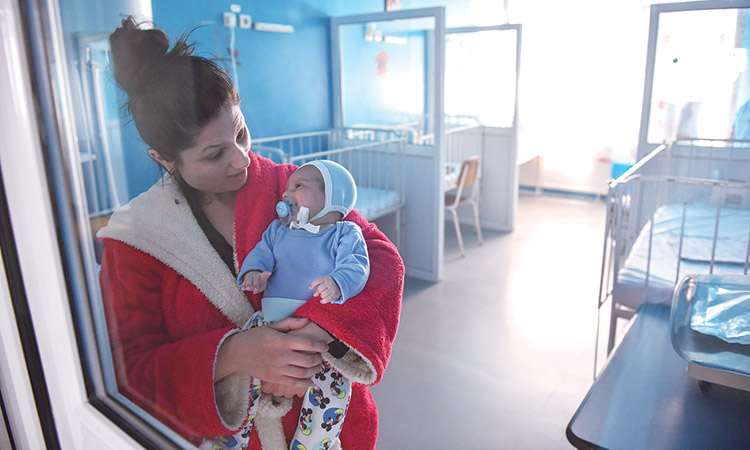 A mother shows her child through a window at the paediatric department of the local hospital in Slobozia, Romania. Agence France-Presse

In contrast to most EU countries, there’s hope in Romania for at least one positive side-effect from Brexit — health workers returning from the UK or not leaving home, which could alleviate the crippling labour shortage in the country’s hospitals.

“I thought I would be more useful in Romania,” says 37-year-old neurosurgeon Horatiu Ioani, who left Britain two years ago as the torturous process of leaving the EU was still in its early days.

He had worked in British hospitals for eight years and since returning to Romania has been performing complex operations at Bucharest’s Colentina hospital.

Ioani tells AFP that among his younger colleagues “discussions about leaving are less frequent than before.” Medical student Catalina Bamford agrees.

“Lots of people from my generation have decided to come back to Romania,” says the 23-year-old, adding that many see signs of improving career prospects at home.

In recent years Romania has experienced an exodus of doctors and nurses, particularly after its entry into the European Union in 2007.

Since then, more than 14,000 healthcare workers have left for other parts of the bloc in search of higher wages and better living conditions as well as higher standards of practice.

And for now, many of those in the UK are waiting to see how the Brexit situation develops before deciding whether to move back to Romania.

Alongside France, Britain has up to now been the go-to destination for those choosing to leave. There are 4,500 Romanian doctors practising there, according to Gheorghe Borcean, president of Romania’s medical association.

The exodus means their home country, already struggling with dilapidated healthcare infrastructure, has to make do with one of the lowest doctor-patient ratios in the EU, with barely 58,000 clinicians caring for a population of 19 million.

Moreover, those who have stayed behind are concentrated in urban centres, leaving swathes of the country virtually deserted when it comes to medical care, says Borcean.

Mariana Iancu, director of the hospital in the eastern town of Slobozia, concurs that “our biggest problem is lack of doctors.”