AFP photographer captures ‘Rahul, Modi in a tug of war’ 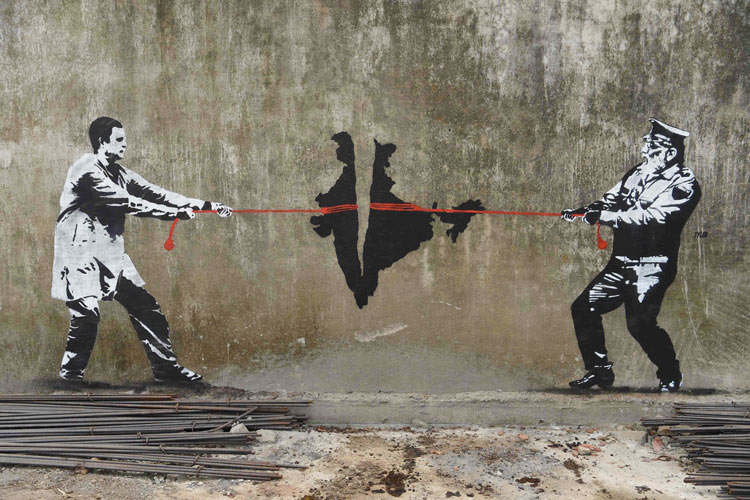 A wall graffiti of Rahul Gandhi and Narendra Modi in Mumbai. AFP

A wall graffiti depicting Indian National Congress (INC) party leader Rahul Gandhi and Prime Minister Narendra Modi of Bharatiya Janata Party (BJP) in a tug of war over India has become the talk of the town.

Gulf Today could not independently verify the details of the artist, but the graffiti was seen in one of the areas of Mumbai.

Indranil Mukherjee, an Agence France-Presse photo- journalist based in Mumbai took the photograph.

The photo shows Indian PM Modi in military fatigue and Rahul in traditional Indian clothing appeared to be involved in tug of war over an Indian map, tearing apart the country in the political battle.

Indians will exercise their franchise in the fourth phase of voting on April 29 in the country's marathon election, which started on April 11 and runs through to May 19 with the results to be declared on May 23.

Rahul on Saturday slammed Modi over demonetisation and the faulty implementation of the Goods and Services Tax (GST), saying that in the last 70 years, "the foolishness of demonetisation and Gabbar Singh Tax" was not done by anybody.

Rahul made the remarks while addressing an election rally in Uchahar in Rae Bareli, the parliamentary constituency of his mother Sonia Gandhi.

In an interview to a television channel on Friday, Modi had dismissed the economists' speculation that demonetisation led to a rise in unemployment. "People are looking for excuses to discredit the huge decision of demonetisation," the Prime Minister had said.