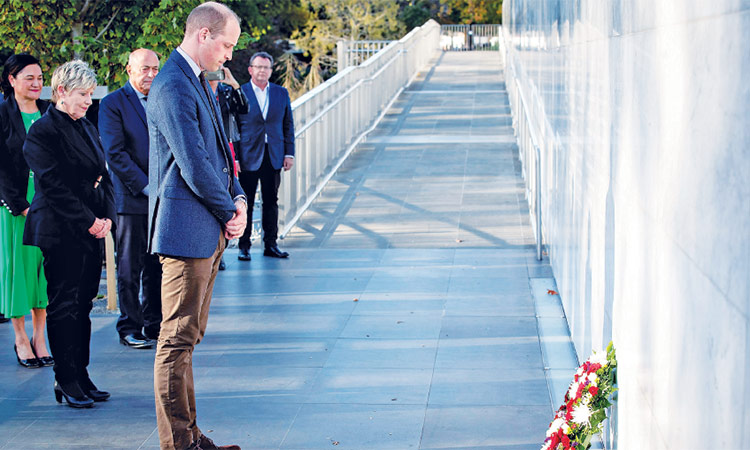 In an emotional meeting with survivors of the New Zealand mosques massacre, Britain’s Prince William appealed Friday for “extremism in all forms” to be defeated.

About 160 people gathered at the Al Noor mosque in Christchurch to meet the prince.

As armed police stood guard outside the mosque and a police helicopter circled overhead, the prince was welcomed to the mosque by the Imam Gamel Fouda, Prime Minister Jacinda Ardern and attack survivor Farid Ahmed whose wife was among those killed.

“What happened here was fuelled by a warped ideology that knows no boundaries,” William told an audience that included other religious and community leaders.

“An act of violence was designed to change New Zealand, but instead, the grief of a nation revealed just how deep your wells of empathy, compassion, warmth and love truly run,” the prince said after arriving at the mosque from a meeting with hospital staff who had tended to the wounded.

“In a moment of acute pain, you stood up, and you stood together. In reaction to tragedy, you showed something remarkable.”

Ahmed, who became the face of the Muslim community when he said he loved and forgave the gunman, told the prince: “We have to keep up hope and not surrender to hatred.”

When William arrived in the country on Thursday he made an unannounced visit to the Starship Children’s Hospital in Auckland where he met with five-year-old Alen Alsati and her father, Wasseim, who were both injured in the March 15 attack.

In a touching video released by Kensington Palace, Alen, who only woke from a coma early this week, asked William: “Do you have a daughter?”

“Do I have a daughter? Yes, she’s called Charlotte. She’s about the same age as you,” William replied.

He flew to Christchurch later in the day to meet with police and medical officers who were first to the scene of the carnage.

The prince told the first responders to the March 15 carnage that when “a good friend” is in need “you travel to their place and you put your arms around them.” “You did an incredible job on a very bad day,” he said, according to Kensington Palace’s Twitter account.

New Zealand Police Commissioner Mike Bush told reporters that the prince had been very supportive and had wanted to make sure the officers and medics were looking after themselves.

Bush said the prince told staff that “A good friend doesn’t pick up the phone when people are in need. You travel to their place and you put your arms around them.”

Anzac Day is a memorial holiday on the anniversary of New Zealand and Australian soldiers, known as Anzacs, landing on the Gallipoli Peninsula in 1915. More than 10,000 soldiers from the two countries were killed during that World War I campaign in what is now Turkey.

William — who also visited Christchurch just weeks after the devastating February 2011 earthquake which claimed 185 lives — will end his brief visit later Friday when he lays a wreath at the earthquake memorial site.

Six weeks to the day from when a self-styled white supremacist killed 50 people and wounded just as many in two Christchurch mosques, the prince said he stood with the people of New Zealand, the people of Christchurch and the Muslim community.