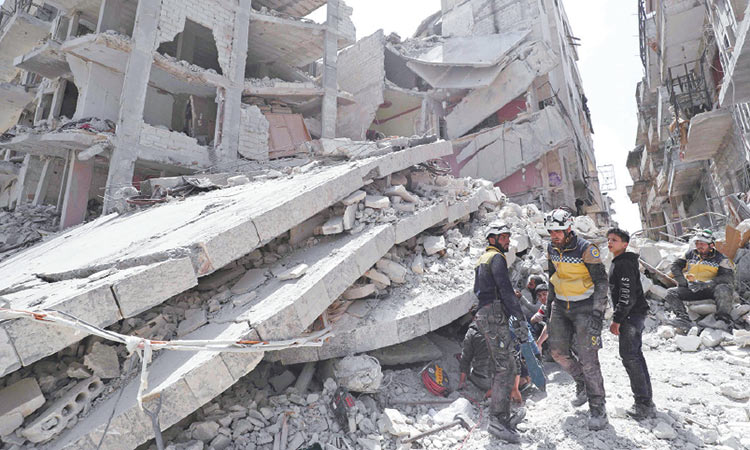 Members of the Syrian Civil Defence search the rubble of a collapsed building following an explosion in the town of Jisr Al Shughur, Idlib province, on Thursday. Agence France-Presse

More than 7,000 people have left a desperate desert camp for displaced Syrians near the Jordanian border since March, a United Nations spokesperson said on Friday.

Meanwhile, two-day talks on Syria backed by Iran, Russia and Turkey concluded in Kazakhstan without notable progress on forming a constitutional committee to drive a political settlement in the war-wracked country.

A joint statement released by the three co-sponsors said the meeting had broached the issue of the constitutional committee with the United Nations’ Special Envoy for Syria, Geir Pedersen. However further talks in Geneva would be needed, it added.

The parties were committed to “the establishment and the convening of the Constitutional Committee at the earliest in Geneva, holding the next round of consultations in Geneva and to support the Special Envoy’s effort,” the statement said.

According to the UN’s humanitarian coordination office OCHA, around 36,000 people remained in the isolated Rukban camp near Al-Tanf base used by the US-led coalition fighting the Islamic State group, after over 4,000 left between March and April 21.

The Syrian government and key backer Russia said in February they had opened corridors out of the camp, calling on residents to leave.

“Since March, over 7,300 people have left Rukban,” OCHA spokesman David Swanson told AFP, including some 3,000 who left after April 21.

Those who have quit the camp have moved to collective shelters in the central city of Homs or resettled in their areas of origin in the province of the same name, OCHA said Thursday.

It said Rukban residents were organising their own transportation to the edge of a de-escalation zone established around Al Tanf, from where they either continued in their vehicles or were transferred by private or government-provided vehicles to four collective shelters in Homs city.

The Britain-based Syrian Observatory for Human Rights says those returning to government-held parts of Homs from Rukban had struck so-called “reconciliation deals” with the Syrian government.

Conditions inside Rukban are dire, with many surviving on just one simple meal a day, often bread and olive oil or yoghurt, according to one resident. The camp has been particularly difficult to reach due to its location on the Jordanian border and the proximity of US forces and the rebels they support.

In February, a humanitarian convoy of 133 trucks delivered food, clothes, healthcare items and medical supplies to the camp’s residents. The Feb.6 delivery was just the second in three months.

The constitutional committee is of particular interest to the UN which favours a Syrian-led resolution to the conflict.

In comments after the end of the first day of talks on Thursday, Russia’s chief negotiator Aleksandr Lavrentyev said that “several unclear issues” were slowing the formation of a constitutional committee but did not specify.

Iran, Russia and Turkey also used the occasion of the negotiations in Kazakhstan’s capital Nur-Sultan to reiterate criticism of the United States for recognising Israeli sovereignty over the Golan Heights.

The three countries condemned the move as a “rude violation of sovereignty” that would “create a threat to peace and security in the Middle East,” they said in a joint statement.

The joint statement also said Iraq and Lebanon would be invited to the next talks in Kazakhstan on Syria in July. Jordan and the United States have observed the talks in the past.

Russia, a backer of Syrian President Bashar Al Assad, has taken the lead role in diplomatic efforts in Kazakhstan that have largely sidelined UN diplomacy in Geneva.

Tehran, like Moscow, is an ally of Assad, while Ankara has aligned itself with the rebels but has repeatedly threatened to attack Kurdish fighters on the Syrian side of its southern border that it views as “terrorists.”

Air strikes by regime ally Russia killed 10 civilians in the jihadist-held region of Idlib in northwestern Syria on Friday, a war monitor said.

The raids took the lives of three civilians including a boy on the outskirts of the town of Kafranbel, and seven including a girl in the town of Tal Hawash, Observatory chief Rami Abdel Rahman said.