Man killed after being run over in emirate - GulfToday

Man killed after being run over in emirate

An African was killed after being run over by a vehicle on Sheikh Mohamed Bin Zayed Road. The driver fled from the scene.

The Police Central Operations Room received a tip off on the incident. Patrols and the national ambulance rushed to the scene where the victim was transported to Al Qasimi Hospital, but he died before arriving, due to severe injuries.

The traffic search teams at Sharjah Police General Command formed teams to investigate the circumstances of the accident and identify the vehicle. They reportedly found it parked in an area. The driver was summoned and interrogated where he confessed to running over the victim. He was referred to the prosecution.

The Criminal Court of Dubai on Thursday looked into the case of an Asian woman accused of impersonating an Emirati woman and offering a bribe of Dhs100,000 to pass a bank transaction.

The employee who works as a customer service assistant at a bank, made his testimony in the case, pointing out that the nature of his work is to provide personal loan and credit card services, open accounts for new customers and offer commercial offers to clients.

The defendant offered him Dhs100,000 in return of facilitate a personal loan to her. She impersonated an Emirati woman and presented a passport and ID copy belonging to her, which she forged in complicity with a compatriot person. She also used these papers to open a bank account under the name of the Emirati woman and presented a fake salary certificate belonging to a government department in order to obtain a large personal loan.

In an unrelated recent event, three pilots who battered two men during a row over a bottle of water inside a Dubai nightclub were sentenced to three months in the dock. The Dutch defendant, 42, Spanish colleague, 43, and the latter’s countryman, 43, battered a Lebanese sales manager, 35. One of them smashed a glass on his head, prosecutors told the Dubai Criminal Court on Mar.17. 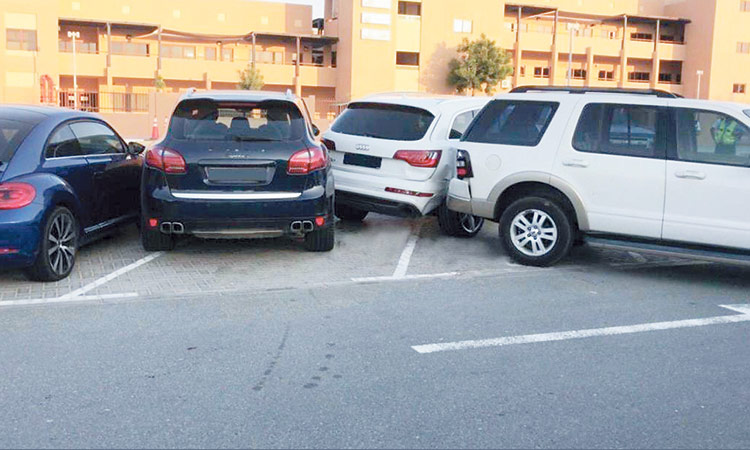 Accident took place when an African woman wrongly pressed on the car’s accelerator instead of the brakes.

The Dubai Public Prosecution in coordination with Dubai Police on Wednesday launched a smart app to shorten time to process accident reports and clear traffic jams.