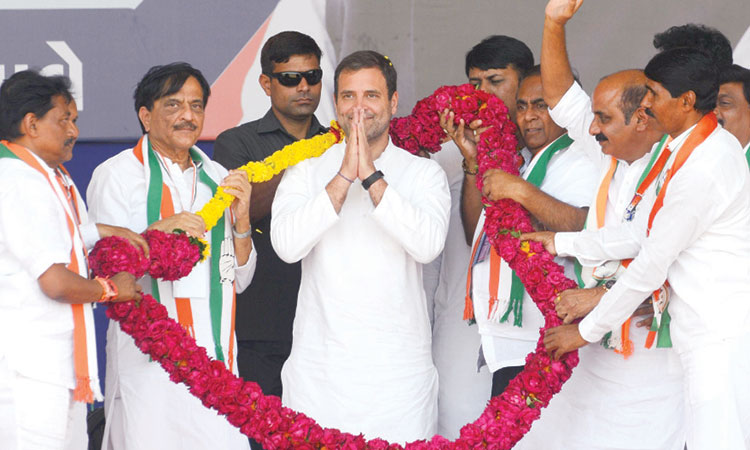 Rahul Gandhi gestures while being garlanded during a political rally at Bajipura village on Friday. Agence France-Presse

“Mr Narendra Modi, come and take the challenge...Don’t be scared.” BJP leader Meenakshi Lekhi had filed a contempt case in the court against Rahul, seeking initiation of contempt for attributing his statement to the top court.

“It is also clear that no court would ever do that (say Chowkidar chor hai) and hence the unfortunate references (for which I express regret) to the court order and to the political juxtaposition in the same breath in the heat of the political campaigning ought not to be construed as suggesting that the court had given any finding or conclusion in Rafale deal,” he said.

In a blow to the Modi government, the Supreme Court ruled on April 10 that classified documents accessed by the media can be used as evidence to consider requests to review its clean bill to the Rafale deal. In cheering the order, Rahul said: “I want to thank the Supreme Court. The entire country is saying that Chowkidar chor hai(Chowkidar has committed theft). It is a day of celebration that the Supreme Court has talked about justice.”

The BJP accused him of putting words in the mouth of the top court and sued him for contempt.