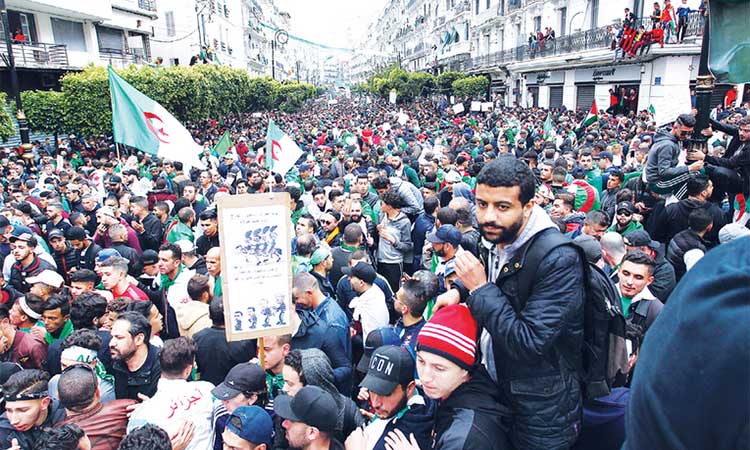 Thousands of protesters filled central Algiers for a ninth weekly mass rally on Friday, galvanised by the departure of long-time president Abdelaziz Bouteflika but vowing to keep up their demands for sweeping reforms.

Algerians first hit the streets in large numbers on Feb.22 after the octogenarian leader’s announcement that he would stand for a fifth term in presidential elections that had been scheduled for Thursday.

But his departure early this month spurred demonstrators to seek further changes, notably the resignation of three senior Bouteflika allies.

Activists chalked up a second victory on Tuesday as one of the three, constitutional council chief Tayeb Belaiz, followed Bouteflika to the exit.

Friday’s crowds were pushing for still more as they clogged streets for several kilometres in the heart of the capital.

With police forces deployed across the city, protesters gathered in the morning at the main post office in Algiers — the Grande Poste — which has been a landmark during the weeks of protests

Demonstrators outside the iconic main post office building chanted “The people want them all to leave!” and “Enough of this system!”

By the end of the afternoon, the boulevard joining the main post office to the Audin square and adjacent streets were crammed with protesters.

In a peaceful atmosphere, the protesters — mostly youngsters — shouted slogans including “Down with the System!” or “You ate the country, you bunch of thieves.” Some vented their anger, while others took selfies.

Conversations about the ongoing political transition took place in a sea of people and Algerian flags.

“What has the constitutional council ever done apart from validating the fraud of the system it belongs to?”

State media and local journalists reported major demonstrations across the country, including in other key cities Oran, Constantine and Annaba.

Police forces, accused in past weeks of trying to quell the protest movement amid teargas-soaked clashes with demonstrators, were keeping a low profile on Friday.

Protesters are demanding the resignation of the two remaining members of a group dubbed the “3B” — interim leader Abdelkader Bensalah and Prime Minister Noureddine Bedoui — saying regime stalwarts should be entirely excluded from any political transition.

Cries of “Bensalah resign” reverberated in Algiers on Friday as the crowds looked to pressure the placeholder president.

Belaiz’s replacement, little-known senior judge and former prosecutor Kamel Feniche, is also seen as a regime loyalist. Belaiz was one of three figures in the interim government whose removal has been demanded by pro-democracy protesters.

They are seen as part of the discredited regime of Bouteflika, who resigned April 2 after six weeks of nationwide demonstrations calling for an end to his two-decade rule.

The army “is convinced that the crisis can be managed through appeasement”, said Geneva-based political scientist Hasni Abidi.

He said its strategy was one of “gradually minimising the scope of concessions.”

Despite Bensalah calling a presidential election on July 4, Algerian demonstrations are demanding a broader overhaul of the political system.

Ailing Bouteflika saw his two-decade grip on power brought to an end after the army heeded the calls from the streets and pushed for his impeachment.

Now the military has become the key player in determining how the next steps unfold.

Mustapha Bouchachi, a veteran lawyer and human rights activist, said that “the peaceful mobilisation should continue until the departure of all the system’s faces. The movement should remain united to achieve the dream of a democratic Algeria with equal rights for all.