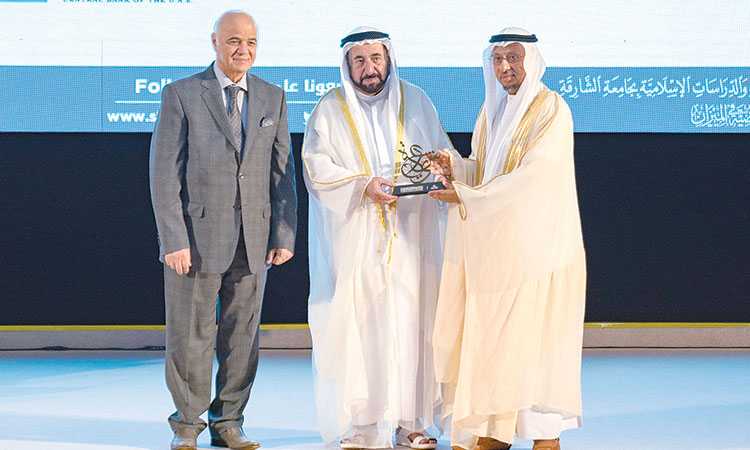 Sultan Al Qasimi attends the inauguration of the “Faculty of Sharia Conference” at the University of Sharjah. WAM

His Highness Dr Sheikh Sultan Bin Muhammad Al Qasimi, Supreme Council Member, Ruler of Sharjah, and President of the University of Sharjah, UoS, witnessed the opening of the 15th International Conference of the College of Sharia and Islamic Studies “Virtual Currencies under Evaluation” on Tuesday morning at Medical Colleges and Health Sciences complex.

Prof. Hamid MK Al Naimiy, Chancellor of the UoS, delivered a speech in which he thanked the Ruler of Sharjah for his patronage and for attending the conference, which is consistent with its scientific and legal components and the general civilizational approach.

The two-day conference is aimed at discussing the creation of a platform through this international conference so that researchers, experts and specialists in the fields of law, Sharia and Islamic studies, Islamic finance and banking, economics, and technicians have the opportunity to discuss, synthesise, evaluate and shed light on the different related issues to the topic, scientifically and objectively.

The opening ceremony was attended by Sheikh Salem bin Abdul Rahman Al Qasimi, Chairman of the Sharjah Ruler’s Office, Mohammed Obaid Al Zaabi, Head of Protocol and Hospitality Department, and a number of officials and guests from local, Arab and international universities.

The University of Sharjah is a comprehensive academic institution with a distinctive learning style and a global vision. It is a pioneer in academia, scientific research and the arts in the UAE and the GCC region. All programmes are accredited by the UAE Ministry of Higher Education and Scientific Research. Some programs such as Engineering, Communication, Science and Business have attained international accreditation.

The University of Sharjah strives to be among the most reputable and comprehensive universities in the Middle East and internationally. The University will maintain excellence in teaching and learning, research, and sustainable academic programmes that provide quality services to the community and contribute to the well-being of society.

The University of Sharjah fosters a culture of critical inquiry in a diverse learning environment which leads to the discovery, creation, and dissemination of knowledge. The University is committed to providing its students with an education and life-long learning experience of the highest quality through the provision of a comprehensive platform of excellent academic and professional programs, promoting creativity, innovation in research and scholarship, and enhancing the personal, social, academic, and career development of all students. The university serves the socio-cultural and economic needs of the community and the society in the UAE and beyond.

The University of Sharjah was established with a great vision to enjoy essential qualities shared by renowned universities around the globe. Such qualities enable these institutions to progress forward much faster than others. The education and research programs they offer tend to be comprehensive and multi-disciplinary. They enjoy considerable infrastructure for learning and research and manage to attract renowned faculty with academic heft. They are decidedly international in their outlook and vision and in the composition of their student and faculty population. They attract talented students from different backgrounds and challenge them both inside and outside the classroom. Finally, they are independent both academically and financially, which means their decisions are guided by the integrity of best expertise and what is good for the advancement of learning, education and research.

The University of Sharjah has expanded in a relatively short span of time to include 14 colleges offering +85 diverse academic programs (majors) at the diploma, bachelor, master and PhD levels. There are currently about 14,000 students enrolled at the university with academic instructions delivered by 610 faculty members having diverse international experience and renowned stature. The University has long-term cooperation agreements and strategic alliances  with 31 leading academic institutions around the globe. These agreements ensure that the education our students receive meets the highest international standards.