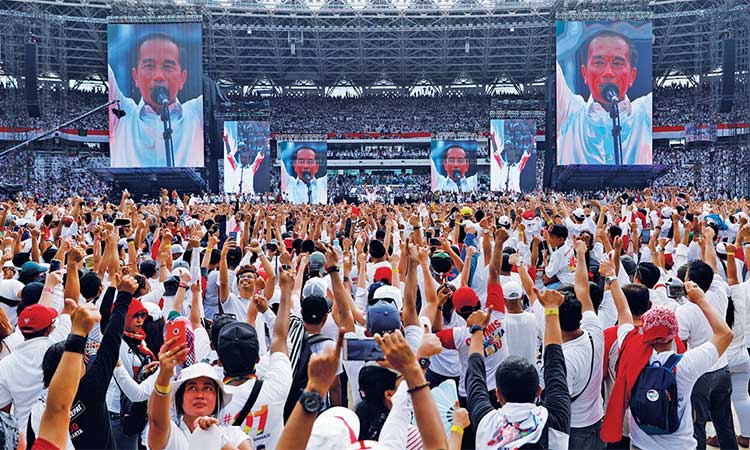 About 100,000 people filled Jakarta’s main stadium Saturday for a huge rally in support of Indonesian president Joko Widodo, just days ahead of the biggest-ever elections in the world’s number-three democracy.

Widodo is leading presidential challenger Prabowo Subianto, a former general, by double-digits in most opinion polls going into Wednesday’s poll.

Earlier, the capital’s already congested streets were jammed with colourful parades and peaceful demonstrations, bringing traffic to a standstill.

At the main stadium, Widodo supporters waved Indonesia’s red-and-white flag as they sang and danced to performances by dozens of musicians.

The crowd cheered as the 57-year-old incumbent, popularly known as Jokowi, pledged his commitment to pluralism in the Muslim-majority country of more than 260 million.

“Our country is a big nation of different ethnicities, religions, traditions and cultures,” he said.

Subianto held his last rally on Friday, which attracted tens of thousands. His vice-presidential running-mate Sandiaga Uno, a wealthy financier reported to have spent $100 million on his campaign, held a big rally Saturday in Tangerang near Jakarta.

“God willing, with Prabowo and Sandi we will create a fair and prosperous Indonesia,” Uno told the crowd.

Subianto’s team has warned it would challenge the results over voter-list irregularities if he lost — setting up a repeat of the pair’s 2014 contest, which Widodo won despite an unsuccessful court challenge to his narrow victory.

Widodo campaigned on his infrastructure-driven bid to rev up Southeast Asia’s largest economy, while Subianto pledged more defence spending and a review of foreign investment in the sprawling archipelago.

Food vendor Ali Suhardi, 55, said he would vote for the heavy metal music-loving Widodo, but across the city, Romlah was itching for a new leader.

“I want change that will make this country better,” said the Subianto supporter, who goes by one name.

There are a record 245,000 candidates competing with some 800,000 polling stations across the country.

Widodo and Subianto appeared in the final of five televised debates between the presidential and vice presidential candidates on Saturday evening.

About 193 million Indonesians are eligible to vote on Wednesday in presidential and legislative elections. Widodo, who narrowly defeated Subianto in the 2014 election, is Indonesia’s first president from outside the Jakarta elite. Subianto is an establishment figure from a wealthy family who was a special forces general during the Suharto dictatorship that ended amid social and economic chaos in 1998.

Subianto’s running mate, Sandiaga Uno, told a crowd of thousands in Tangerang that a government led by them would focus on ensuring Indonesians had good jobs and a lower cost of living.

“We will be able to unite the country and make this country very strong,” said Uno, a businessman who has spent more than $100 million on the campaign.

Subianto supporter Akhirudin Konsi said he wants a “president who will fight for our rights and stand behind people, who will lower prices, especially education, fuel and basic needs.” Polls show Widodo has maintained a big lead over Subianto for months, but some analysts say the race is tighter than it appears.

Businessman Sahala Panjaitan said he and four family members came to Jakarta for Widodo’s rally from Pontianak in West Kalimantan province on the island of Borneo.

“We came from across the island because we want to show that Jokowi’s support was far greater,” Panjaitan said. “He is the nation’s best son.”

Separately, some panicked residents of a quake-hit Indonesian island have refused to return home after the tremor triggered a brief tsunami warning and fears there was more to come, the disaster agency said on Saturday.

Aftershocks rippled across the east coast of Sulawesi — an island where thousands were killed in a quake-tsunami last year — as officials scrambled to assess whether there are any casualties or major damage.