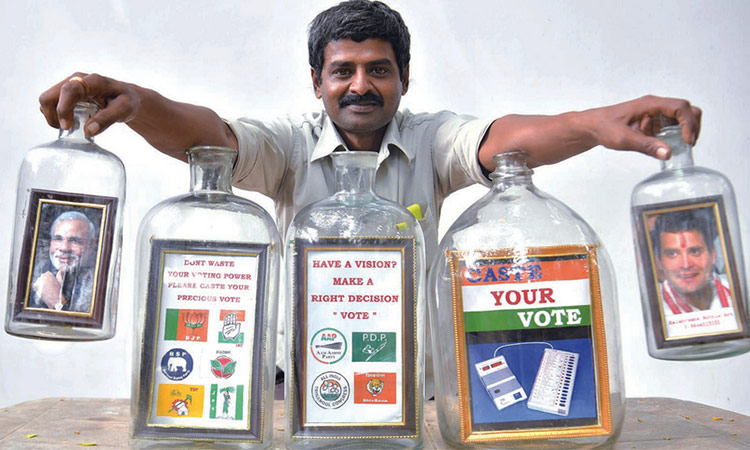 “Modi will be addressing a meeting in Theni in the morning and then in Ramanathapuram,” the BJP official said on Friday.

Modi is expected to arrive in Madurai later on Friday and spend the night in this temple town.

At Theni, Modi will seek the support of voters for candidates of the AIADMK-led alliance contesting in Theni, Dindigul, Madurai and Virudhunagar Lok Sabha seats.

The BJP is part of the AIADMK-led alliance in Tamil Nadu.

Rahul will address three rallies in Kolar, Chitradurga and KR Nagar in the Mandya parliamentary constituency, about 100km southwest of Bengaluru.

“He will campaign for our candidates at Kolar and Chitradurga and for our Janata Dal-Secular (JD-S) ally candidate Nikhil Kumaraswamy in the Mandya seat,” Congress official Prakash Rathod said.

Modi addressed two rallies at Chitradurga and Mysuru on Wednesday.

Of the 28 seats across the state, 14 in the central and southern regions will vote on April 18 and the remaining 14 in the coastal and northern regions on April 23. Vote count in all the seats is on May 23.

Of the seven rallies the BJP has scheduled for Modi, the last two will be at Belgaum and Chikkodi.

The BJP is contesting in 27 parliamentary seats and supporting multi-lingual south India actor Sumalatha Ambareesh, an Independent, from Mandya against Nikhil Gowda of the JD-S.

The Congress and JD-S have fielded joint candidates in all the 28 seats in the ratio of 21:7 under a seat-sharing arrangement.

As Modi’s two rallies in the state coincide with the first phase of polling on April 18, BJP’s rivals protested that his address at the twin rallies if held during the day may influence the electorate voting in 14 seats across the central and southern regions.

Rahul has already campaigned for the party in the state twice on March 31 at Kalaburagi and Bengaluru on March 18.

He also addressed a party meeting at Haveri on March 9.

Meanwhile, Modi on Friday again nudged NCP President Sharad Pawar to denounce a proposal to make two “Prime Ministers” - one for Jammu and Kashmir and another for India as propounded by some Congress allies.

Modi’s comments came again at a public meeting in Ahmednagar in western Maharashtra - Pawar’s home turf - after his remarks on similar lines at his previous political rallies in the state.

“We have no expectations on this from Congress, they are reaping what they sowed. But what’s wrong with you, Sharadrao? For how long will you keep quiet on this demand for two Prime Ministers? Your party’s name has ‘nationalist’ in it, but is it only to defraud the people of the country?” Modi asked.

Needling Pawar, Modi asked why the Maratha strongman - who had left the Congress in 1999 - was keeping mum and accused both Congress and the Nationalist Congress Party of joining hands with those who want to separate Jammu and Kashmir from India.

Modi questioned how, with Pawar around, could people speak of two Prime Ministers in one country, and also wondered how the NCP chief could tolerate such blatant separatist talk when he hails from the “land of Chhatrapati Shivaji Maharaj” and had served as a former Union Defence Minister as well.

Vowing to safeguard the country’s security and integrity, Modi asked whether the youth wanted “an honest Chowkidar” or a “corrupt naamdar” (Gandhis), would they choose India’s heroes or those who are heroes in Pakistan.

He urged that it was up to the people to decide what direction the country will take.